As I’ve mentioned before, Gabriele of MaxArt Body Piercing in Italy has been creating innovative shaped transdermals (to say nothing of his invention of the Skin Tunnel invention), starting with a cross-shaped one, and most recently a teardrop shaped one. Let me update you on the cross-shaped one first. I have to admit that I expected the skin to retract — I didn’t think this would be successful. But much to my surprise, even at three weeks in (which is when the two larger shots were taken), the skin rather than retracting, seems to be pulling in toward the implant. This is most likely due to Gabriele’s design decision of cross-drilling the transdermal (which you can see in the shots of the jewelry).

Most recently Gabriele has done a tear-shaped one as well, another piece of great design. Obviously some of these aesthetics can also be accomplished by putting shaped beads on normal transdermals, but these are much more powerful on closer inspection. Now all we have to wait for is the cheap knockoffs of his design — I’m already seeing horrendous clones of his skin tunnel that have none of the beautiful high-quality titanium machining that is typical of Gabriele’s transdermals and Skin Tunnels (manufactured by Veleno Web). 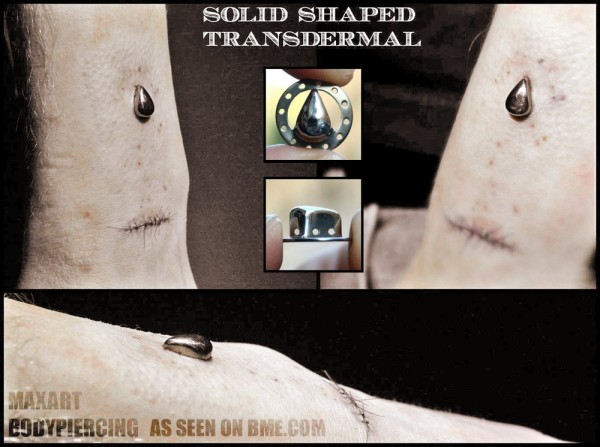 Speaking of that famous Italian inventor (no, not Leonardo) Gabriele from MaxArt, after the SkinTunnel he’s got another innovation that he’s beginning experiments with, a design for a shaped-post transdermal. These get installed like a normal transdermal would be, but the hole is cut to shape with a scalpel rather than being dermal punched as you’d do with a typical round post. I will admit that I’m not quite so certain that this will heal as beautifully, because it’s asking a lot of the body to pull into some of those little detailed indents in my opinion. Whether I’m wrong or not time will tell, and I am eagerly awaiting pictures of how the healing is going — it’s a ton of fun seeing people continuing to innovate in body modification. 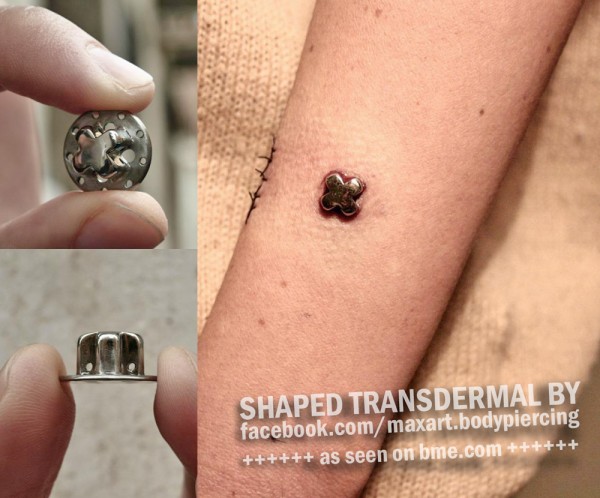