It’s pretty common to hear “oops” stories about kanji tattoos — “I thought it meant ‘brave warrior’ but in fact it means ‘orange chicken!’” — but tattoo symbology is a rich subject, so I wanted to tell a story about my friend Mike. 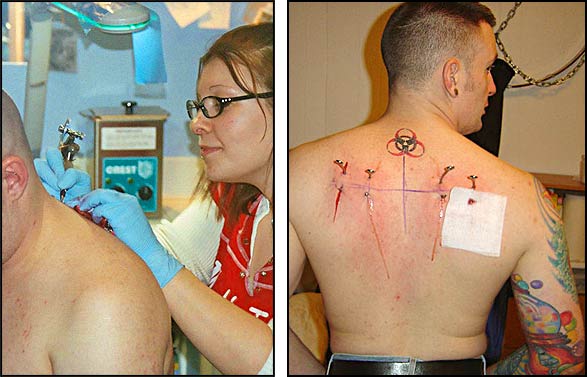 That’s him getting tattooed by Joi, and the resultant biohazard symbol tattoo. He got it right before the 2004 Rhode Island SusCon. At a suspension convention, controlling cross contamination is extremely important and far from easy. I’ll let Mike tell how people responded to his tattoo in his own words:


I went back to my room and checked my e-mail. The friend to whom I’d sent pictures [of my tattoo to] had replied. His response was “Ummm…. Isn’t that usually for poz guys?” That was not the response I was looking for!

[Earlier Ron Garza had also] wanted to know if I knew the significance of my new tattoo. I felt myself getting nervous. He told me that among gay men, it’s an indication that one is HIV positive. At first, I thought he was joking. It took me a few minutes to realize that he was serious.

How the hell did all of these people know about the significance of my tattoo when I didn’t? I spent most of that weekend in a panic. Obviously, I was a little freaked out. The last thing I wanted was for people to think that I’m HIV positive when I’m not. As a gay man, that’s a pretty sensitive topic for me.

He’d considered a cover-up, but Mike ended up deciding to keep the tattoo as a reminder to himself that he hadn’t done his homework, a mistake he never wanted to repeat. I should mention that Mike also has several gorgeous tattoos by Jon Clue, including a custom Dr. BME logo.