So I guess the latest BS fearmongering about piercing is the claim that anyone who gets a piercing should go get a tetanus shot. Ignoring that these days a majority of people are vaccinated against it, tetanus is a bacterial infection that’s contracted from the Clostridium tetani which lives all over the world in soil, dust, and manure. It’s very rare, with less than 50 cases yearly in the United States and almost all of the serious ones being limited to people over sixty years old.

It’s pretty crazy what theoretically reputable “medical sites” claim the risks of body piercing are — it’s not even that uncommon for sites to make bizarre claims like linking body piercing to malaria and even leprosy. Yeah, if you get a piercing you might become a leper.

It’s not as if people get getting piercings in leper colonies and sharing needles with lepers. It’s not as if people are first burying the needle and jewelry for a couple weeks, and then using manure for aftercare. By and large modern body piercing is done using sterilized equipment and the risk of catching long-shot diseases are miniscule to the point where you are literally thousands of times more likely to be struck by lightning than to catch tetanus, malaria, or leprosy via body piercing.

Anyway, a friend of mine’s mother just watched some TV show that was going on about how kids were at risk of tetanus to the point where if they got piercings, they needed to go right to the hospital afterwards and get themselves a tetanus shot… The following note was stuck to her door in the morning: 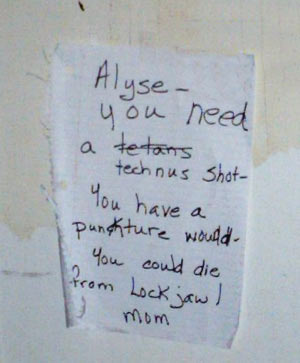 Seriously though, while it’s important to be aware of the risks of all things that you do, it’s also important to understand that worrying about risks that are million to one long shots is a slippery slope — with that attitude, you’d never leave the house. Or maybe you should leave the house because it could collapse. But if you go outside, you might get hit by a meteorite. But if you go back inside, a swarm of bees might follow you and consume you. But if you stay outside, it’s possible that a tiger that’s escaped from the zoo will eat you. Et cetera…

4 thoughts on “Leprosy from body piercing”