Pretty much anybody who knows me [edit: posted by Jordan Ginsberg] is well aware of what an enormous nerd I am when it comes to the band Pearl Jam. My longtime sentimental favorite band, I’ve been following their career since I was in short pants. As one of the Pantheon Level All-Time Great live bands, there are few things I enjoy more than the opportunity to see them in concert.It’s a sad day when you realize that your favorite band hates you.

Not long after I got to Mexico, the band announced they were to play a full-scale tour in my home country of Canada, a trek that would have enabled me to catch about seven or eight shows had I not just moved a couple thousand kilometers away.

But I got over it, and within a month, softly crying myself to sleep was a bi-weekly event at best. The tour began a few short weeks ago, and as per usual, the band is releasing high-quality audio files of each show, but is also including several great photos from said concert. The following are of lead guitarist Mike McCready, showing off some of his fairly recent tattoo work: 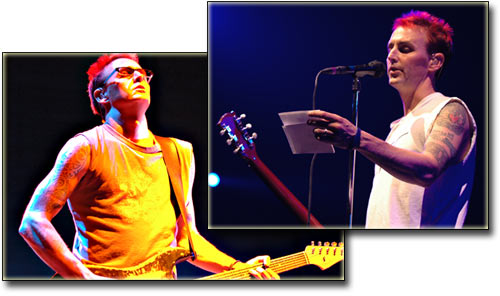 I’ll be honest: I was going to make this whole entry about McCready and his tattoo work, but really, there isn’t much to tell. His interest in tattoos was ostensibly piqued after befriending the heavily tattooed frontman of seminal punk band Social Distortion, Mike Ness, and has since covered himself in an array of traditional/flash designs.

With some searching though, it came up that his tattoos were done, at least in part, by a woman named Kate Hellenbrand, who sounded familiar to me for some reason. 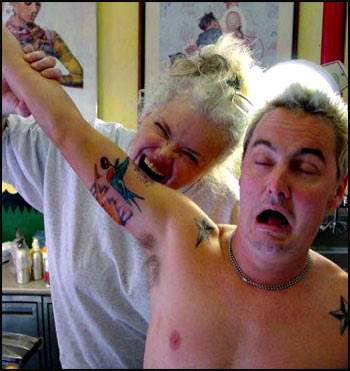 (Now, I’ll come clean that my knowledge of tattoo history is meager at best. If you want to discuss piercing minutiae over a strong coffee or a stiff drink, I’m your man. But tattoo history? I’m the guy who fell asleep during a Lyle Tuttle [MORE] seminar on tattoo machines last week, and I assume that his goons are after me as I write this. Imagine nodding off while listening to Les Paul talk about guitars. Im a putz.)

It only took a few seconds of browsing her site to peg her as an old friend of none other than Sailor Jerry. Having worked professionally as a tattoo artist since 1972 and having owned a host of shops since then, she is one of the communitys oldest and most well known stars that a tattoo-idiot like me would clearly know nothing about.

Though her Shanghai Kates page is worth taking a look at as a whole, one section that really struck me was her recalling her relationship with the aforementioned Sailor Jerry Norman Keith Collins:

[] He was an avid proponent of the art of tattoo, as a staunch conservative, often rankled his community-at-large with his stern demands for respect. He caused a furor when he doubled his fee from $25 to $50 an hour and celebrated when his angered clients swallowed their pride and returned for more work at his new rates.[]He pursued his many hobbies to the professional level. He was a talk-show host, a master seaman, a dance band saxophonist. He was an innovator, a jokester a genius. He was not always easy to love but always worth your respect.In 1972, I was invited to be one of the seven artists at what was to be the first international tattoo convention in Hawaii, hosted by Sailor Jerry Collins. He dubbed us "The Council of the Seven."

The council lasted approximately a week. When the other attendees left, I remained behind with Jerry to work for another several weeks. Although I had only begun my tattoo career, Jerry opened his home and shop to me, requiring that I work from 3 p.m. to closing (usually around 10:00 p.m.), just as he'd demanded of a regular (i.e. male) apprentice.

Jerry was a consummate practical joker of incomparable magnitude. Often the entire city of Honolulu would have to halt "business as usual" because of one of his pranks. One favorite was the time he strapped a giant salami and two hairy coconuts just below the golden belt on the revered statue of King Kamehameha, right before the beginning of the King Kamehameha Day parade. Floats, marching bands, majorettes, and dignitaries had to stand in the hot Hawaiian sun until workers could find a ladder large enough to scramble up and cut down the offending pornographic appendages. He was never found out for his many elaborate escapades.

I was the least likely candidate for this kind of relationship with him. I respected the two things he disliked the most in tattooers: youthful inexperience and being female. However, his real nature overrode his prejudices. His gifts to me were of generosity, patience, friendship, and understanding. He was a teacher, a role model, a rascal, an innovator, and a legend. 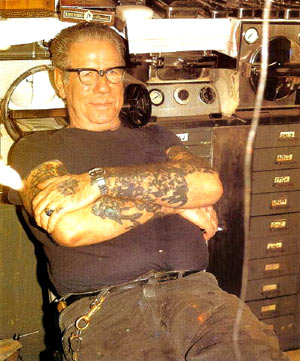 This may all be old hat to many, but I assume that Im not alone in my relative ignorance of these early proprietors and pioneers. I can only imagine that there are hundreds more stories to hear.

Maybe its just me, but its always nice to know that youve still got a lot to learn.