So, a customer comes into my friend Kivaka‘s studio and shows him her extremely irritated daith piercing, which you can see in the picture below. It had been doing OK, but she’d wanted to change the jewelry or something, and couldn’t figure out how — her friend spent a couple hours trying to get the bead off and banged her cartilage around quite a bit in the process. 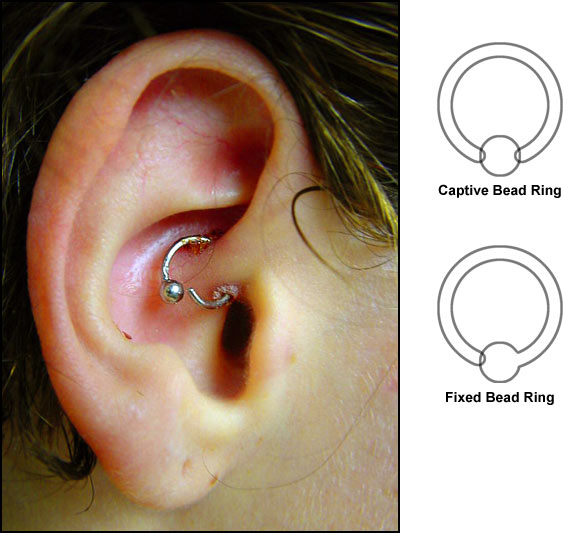 Turns out she’d forgotten — or was never told — that her piercer had used a fixed bead ring (presumably to eliminate the possibility of dropping a little bead down her ear canal), and they were trying to literally tear apart a permanently fused piece of metal, leaving her with what could easily keloid and scar her forever!

Lesson’s learned? First, know what jewelry is being used on you. Second, if you have a problem with a piercing and it’s not obvious how to solve it, don’t ask your buddy to try and solve it with force. Go see a competent piercer instead!

That said, emphasis on the word “competent”. There are a lot of bad piercers out there, and Kivaka finds himself cleaning up a lot of other people’s messes, as do most good artists. For example, the person below came in to get her navel jewelry swapped. Notice that the marks from the clamps from when the piercing was initially done are still there:

Now, it’s not unusual for clamps that have been put on a little tight to leave a mark for an hour or two (not that that’s a good thing). But this person hadn’t just been pierced. The jewelry was initially put in place a year earlier — this imprint is permanent! What kind of sadistic piercer puts clamps on their customers so tight that the marks become hard scar tissue and last forever?

One thought on “Real horrorshow via Kivaka”