[Ed. note: This was first published on BodyMod.org.]

A couple days ago, I received a phone call from my friend Dan Marshall telling me that Robert Hernandez was in town from Spain and that they were all heading to my favorite bar (Three of Cups) for some “welcome to the country” drinks. There wa 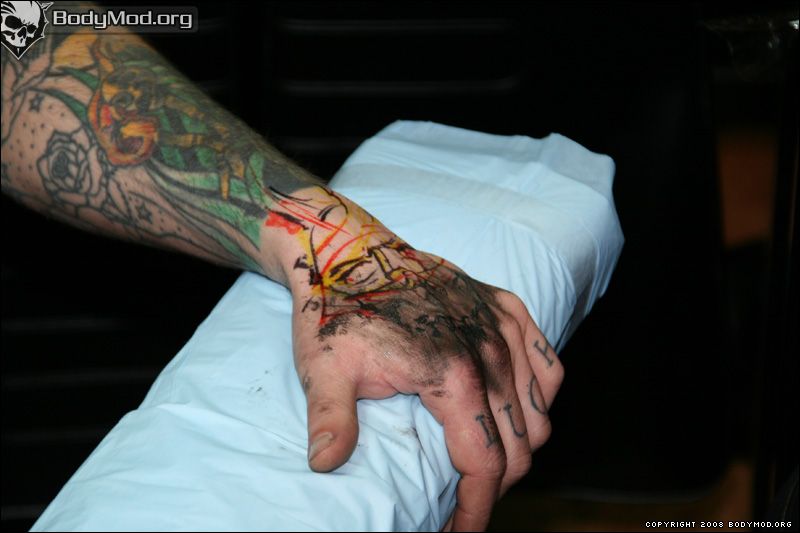 s only one tiny problem… I was in Cincinnati, Ohio.

Needless to say, I missed out on that fun night.

Thankfully though I was back in town to meet up with them Saturday afternoon in the Tribulation Tattoo studio. I had woken up just in time. Dan was going to get his hand tattooed by Robert. There wasn’t anything planned out, and it was going to be totally free-hand. As with many people out there, I’m a huge fan of both their work, but this seemed like an important occasion for a ton of reasons, and I was glad that I was able to be there to check it out. On top of that, it was a nice warm day in the city (like, 65 degrees), so everyone was in a good mood everywhere!

The reason this is more than just one tattoo artist tattooing another is with the history of these two artists.

Around six years ago, Dan had moved into NYC and was working at Last Rites with Paul Booth, Tim Kern and Liorcifer. At that time, he was also living on Tim’s couch out in Brooklyn. A few months later, I moved into the city from Jersey City (thank god that was over), and I needed a new roommate. I was in Last Rites fucking around and I mentioned that I was just down the street, and if anyone knew of someone to let me know.

I was friends with everyone in the shop, except Dan at that point (not not friends, but we just never really talked). He said that he’d like to check it out, and for the next four years, Dan was my roommate.

Over that time, I got to watch Dan’s artistic style progress. During that time, one of the more frequent guest artists at Last Rites was Robert Hernandez. I remember the first time I saw him working. I had walked into the studio and saw a little, soft-spoken guy in the corner working on someone’s leg. When I saw the almost-finished piece, I was awestruck. It was one of those moments when you’re like, “Holy shit, that’s even possible?!” His work is beautiful.

If you’re not familiar with his work, you need to stop reading this now, and check it out!

When I first met Dan, he had a very particular style of work. It mainly focused around color work with a twisted, macabre anime look and feel, hence his acceptance into Last Rites. Paul and Lior were the black and grey guys, Tim and Dan were the color guys.

Many people came from all over to get work by him and craved the type of work he was producing. Then, something happened. I’m not sure of the exact moment, but it was quick, and it clicked. His work became more dark (both in style and color) and more developed overall. I remember one day thinking, “He’s onto something big here…”

His work started having pieces of what would later become his style today. I would notice little things, like cracks around the eyes of a skull, or the life-to-death sweeps across a face. These types of things really stuck out, and eventually they all came together to form what makes up his work today. And the influence of Robert Hernandez’s work is huge in the development of this. I know Dan sees it, but from the outside, it was pretty cool to watch the chrysalis form and take shape to what it’s become.

And now, Dan was getting his first hand tattoo, and it was from Robert. I’m not sure if it’s ever been written down anywhere, but there’s a kind of unwritten code, and meaning behind tattoos, tattoo artists, and tattoo placement. I’m sure someone’s taken the time to explain it all out, but I’ll just touch on the hand aspect of it.

When someone makes the decision to get their hand tattooed, they’re making a life-long commitment to a certain way of life, for better or worse. Once you make that leap, you will never be perceived as one of “the normals” ever again. You can’t put on a longer shirt, cover it in makeup, or hide it from everyone around you. So what you put on your hand is an important decision. When I asked Dan why he finally decided to get his hand tattooed, he told me:

“I’ve been going back and forth on whether or not I wanted to tattoo my hand for about ten years now. After touring the last few months, and hanging out with Robert in Milan, I decided it was time and I asked Robert if he would do it. He obviously said ‘Yes.’ Haha!”

So when making such an important decision, you can see why the next part is probably the most important part, who does the tattoo. From the old-school of tattooing, tattoos on the hand and neck were reserved for only other tattoo artists and were done on each-other. They were done by a friend in the business that also respected you as an artist for what you have done. A lot of that tradition has sadly been thrown out the window now, but not this occasion. This was a moment where two amazing artists were sharing something and passing something onto each other. One was giving the other a tattoo that would be forever a large part of his life, and the other was allowing the tattoo to be done by that artist. The fact that Dan was getting his hand tattooed by the person that probably had the most influence on his work just added to the awesomeness. 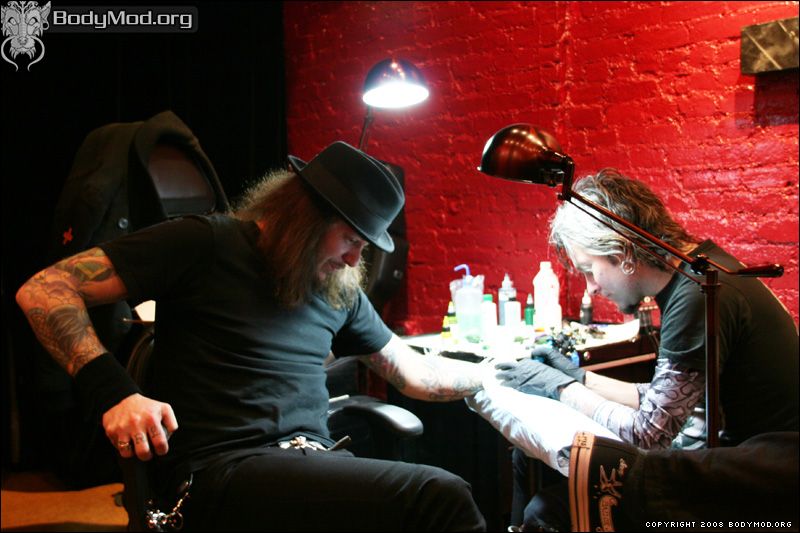 Getting tattooed can be a lot of fun, and they can be crazy drunken Vegas memories, but it’s moments in tattooing like this that bring it all back to what the art form was created for in the first place thousands of years ago. It’s a commitment to one’s life and acceptance among their peers through a ritualistic bonding experience.

It’s nice to see that even with the massive detachment of the Internet, that we can still come together and share these experiences. I think, in part, that’s why a lot of us are here. We use our online communication to help build out and create experience like this. It let’s us connect with amazing people in real life from around the world that will forever change our lives for the better.

I have now begun talking with Robert to do my chest piece, and I haven’t been this excited about getting a tattoo in a long time!