Hello Modbloggers, Sean Philips here (IAM: LexTalonis). As one of the new guest contributors to Modblog, one thing I want to do is a regular “From The Vault” feature. Modblog has featured the latest and greatest in mods since it’s inception a few years ago, but there are tons of amazing, classic pictures just growing stagnant in the farthest back pages of BME that really show where we as a community came from, and in some cases, where we could still go.

For my first entry I want to go back to the early 21st century, a time when scarification as an art form was developing rapidly. On Modblog we feature AMAZING scarification pieces that rival tattoos for the amount of detail that they contain, but this super detailed scarification is a very recent addition to the body mod world.

In fact, it wasn’t that long ago that the concept of flesh removal to create an artistic scar wasn’t even common. This piece was my, and several other practitioner’s first exposure to flesh removal. The removal was done by Toro, one of the pioneers of flesh removal scarification. The branding was done by Blair, who is arguably the greatest strike brander in the world.

James Raimar got this huge and amazing piece while myself and others watched in awe over a live video feed. Myself and several others returned home and immediately started  trying out this new technique ourselves and look where scarification has gone! The techniques have improved and the aftercare has VASTLY improved, but it is important to remember where our art came from and this piece was a big part of the modern history of scarification.

Here it is one month after being done.

…and where there is nudity, Shawn Porter is sure to be near by! 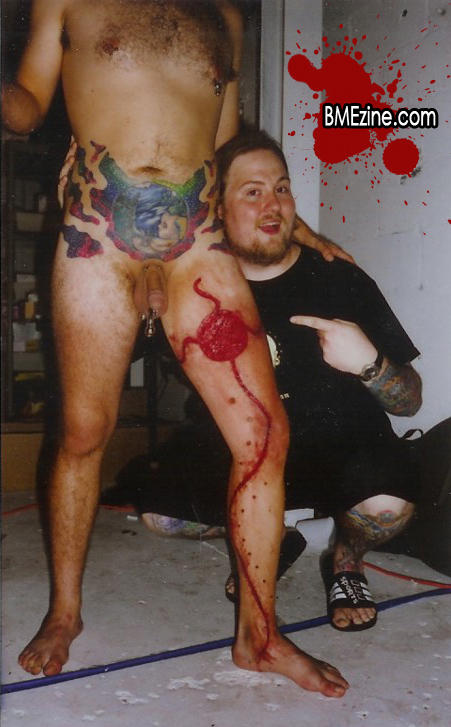 11 thoughts on “From The Vault: My first exposure to flesh removal scarification”