In today’s final post, we’re going to look at one more piece done by Chriz from Boxe_Voll? Tattooz in Germany.  This image, along with the rest of today’s images, and many more by Chriz can be found in the new skool tattoo gallery. 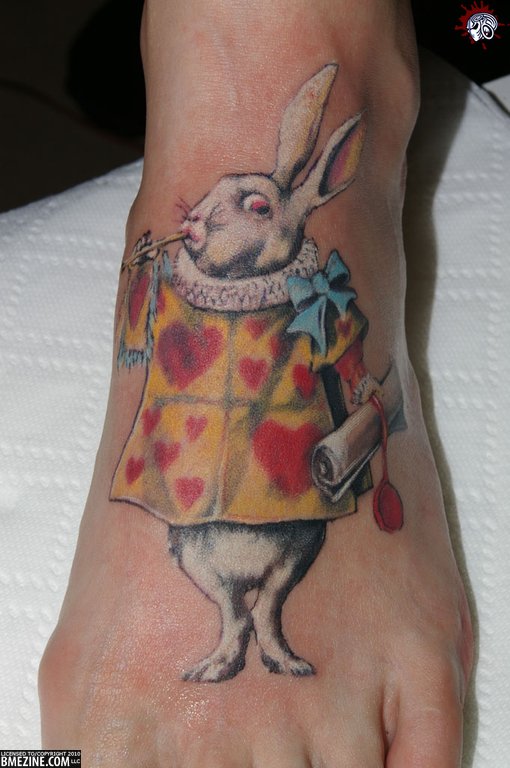 When Lewis Carroll first penned his tale of Alice and her adventures in Wonderland, I wonder if he knew he would be creating so many memorable characters.  Since 1865 “Alice’s Adventures in Wonderland” has been delighting children and adults alike.  With countless editions available, multiple film and television adaptations, and an innumerable amount of pop culture references littered across every medium, it’s no wonder that so many people are familiar with Alice.

Now of course, Alice is hardly the only character in the story, as it is these characters that breathe life into the story.  The Mad Hatter, The Queen of Hearts, the Cheshire Cat, and the Caterpillar are just some of the characters that make up the landscape that is Wonderland.  There is one character in particular that is the catalyst for the adventures, that being the White Rabbit.  Going down the rabbit hole and chasing that rabbit was Carroll’s way of taking the reader into a world beyond their imagination.

When Carroll first published the book, he commissioned artist John Tenniel to provide the illustrations.  It was these illustrations of the characters that eventually led them to became the cultural icons that they are today.  So this white rabbit that Chriz brilliantly transferred to tattoo form (on a foot no less!), is now just one more example of just how much impact these books have had on people from all over the world.

Now the big question, which is better, the book or any one of the many films made about Alice?  OK, that’s not fair, obviously it’s the book, but is there any adaptation or reference that sticks out in your mind whenever you think of the book?  Oh, and why is a raven like a writing desk?

13 thoughts on “Why is a raven like a writing desk?”