Once upon a time,  I was working in a bookstore and one of my coworkers saw my own tragus piercing and proceeded to inform me that the piercing was incredibly dangerous because there is a nerve there and if they pierce it, it will paralyze your face.  “No, there isn’t,” I said dryly, trying to extract myself from her eager jabbering.  She continued to explain that this was dangerous and then did something that I really, really hate.  She reached out and put her grubby finger on my piercing while asking, “Doesn’t that hurt?”  I actually flinched and likely responded by telling her that yes, it hurt terribly and I was in constant pain, followed by a roll of my eyes.

What’s the purpose of this trip down memory lane?  Urban legends, myths and misconceptions.  We’ve all heard them, I’m sure.  The dreaded nerve that will paralyze your entire face.  Piercing your tongue will cause you to lose all your sensation of taste.  If you have a tattoo over your spine you can’t get an epidural.  Some of them are funny, some of them are ridiculous but the point is, people believe them and that can have consequences.

BME has always tried to serve not only as a documentation of body modification but as a platform for education.  Here’s where you come in readers.  Tell me about what urban legends, myths and misconceptions you have heard regarding body modification and if you have the knowledge, feel free to also debunk the myth with solid facts.  The information we all come up with is going to be included in the new Misconceptions FAQ on the BME Wiki.

So let’s have them!  And just so you don’t think I don’t love you, here’s a gratuitous photo of a beautiful woman pulled from the moderation queue. 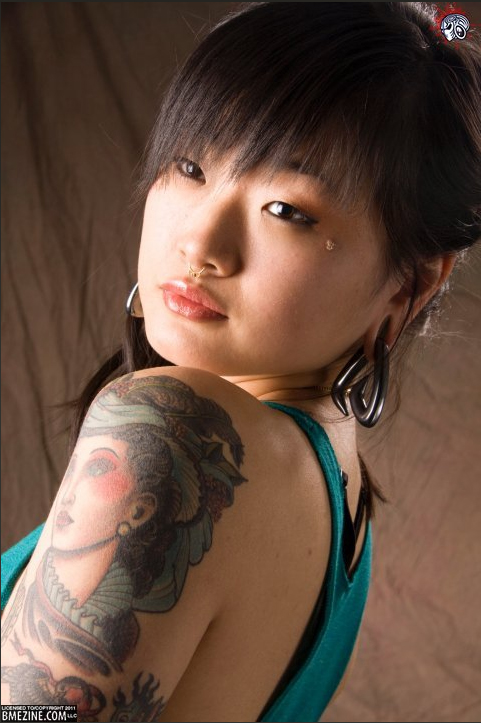 Meizy’s piercings were done by Mike French and Spider.  Her stone trinity spirals are by Oracle.