As many of you know, I’m a voracious reader of comics and have talked before on ModBlog about creating some sort of database of bodymod and body art in the illustrated world. Today I read last year’s graphic novel BleedOut, which tells the story of a world devolved into a sort of criminal feudal dystopia after worldwide oil supplies mysteriously run out in a matter of weeks — “civilization devolved 200 years in less than one”. The comic actually exists as a vessel to explain the post-apocalyptic 3rd-person-shooter criminal simulation MMO CrimeCraft (crimecraft.com), “believably” letting players know how the world devolved into gang-moderated hell so quickly. I’m actually glad I didn’t find out this was the purpose of the comic until afterwards because videogame tie-in comics are usually so terrible that I might not have read it at all.

Anyway, the comic is broken up chapters, each drawn by a different artist — with some great names like Nathan Fox, Zach Howard, Sanford Greene, David Williams, Gary Erskine, Howard Chaykin, Glenn Fabry, Vince Proce, and Trevor Hairsine. The book as a whole tells a story about this awful world, and most chapters are a sort of vignette on a different crime lord. The chapter that caught my eye for ModBlog was “Youth Bulge”, drawn by Ben Templesmith (you may know him from 30 Days of Night), which is about Arkady Kavchenko, who runs adult entertainment in the city where the story takes place — pornography and porn, with a taste for kink, the farther out the better. He’s also been infected with a genetic virus of sorts that gives him Wolverine-like healing. Before selling people a vice, he always tried it first, and this taste for kink would have killed a normal person “twenty times over”, but somehow he’s survived it. The apex of his dangerous perversion pyramid? I was amused to see that it was suspension! 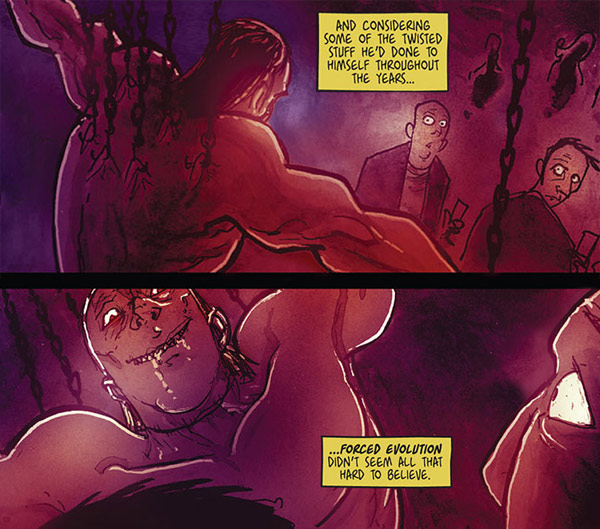 Click to see the whole page, or better yet, pick up the comic. It’s not in any way body modification themed as a whole — there are a myriad of tattooed characters (they are criminals after all!) but it’s completely incidental — but suspension is rare enough in pop fiction that I thought it was worth a mention.