One of the most interesting group of people in the body modification world is the small group of at most one or two dozen people undertaking a “concept” transformation — the best known perhaps are those that are performers and exhibit themselves to the world, such as The Lizardman or The Enigma and Katzen. Other like Tom the Leopardman or Stalking Cat Dennis Avner live more reclusive lives, and there are a few inbetween like Eva Medusa. I want to introduce you to another character that’s setting out on this journey, Jester Mayhone, who you can follow on Facebook at facebook.com/JestertheJesterspage. As his name makes obvious, he has set about not just covering himself in clown and jester-themed artwork, but also tattooing himself permanently as a jester in full makeup and costume — I can’t help but be reminded of a “secret society” of street clowns, all tattooed with permanent clown makeup, that I came in contact with via a friend that was riding the rails. In any case, Jester has taken the big step of applying the permanent jester makeup to his face, so I think it’s time to introduce him to the public properly — here is his portrait, and below it you can learn much more about him. 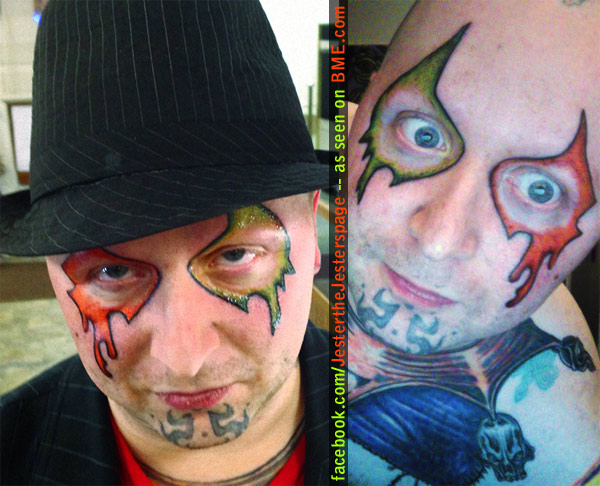 Jester told me, “I think my love for jesters and clowns started when I was a child — I was always amazed by anything related to them. To me, being a jester and being that jack of all trades character has also had a very deep meaning, because I felt that they could express every emotion felt — or rather anything going on — more than anyone else could. It’s the main reason that when I started painting I used the jester as a subject, using the character to express my own, and everything I felt and thought. It seemed like the best way to convey the world around me. I have always been the one joking around, making people laugh, doing crazy things and speaking my mind, without any fear of what people did or thought. I have always been me and made no apologizes for it, regardless of if I was too “out there”, too loud, too goofy, or just too blunt for some people.”

“In old times with kings and the like, jesters were able express something to the king when no one else could. I always thought that was fantastic. So with that in mind, when I first started drawing and painting the Jester to express my thoughts or views, this became my Abstract Jester Series, a series of hand drawings, digital art, and paintings that I continue to paint even now. In fact. right now I am slowly working on re-creating many pieces of art from our history through this series, adding jesters to paintings like ‘The Scream’, and ‘The Last Supper’.”

“I have probably created a few thousand abstract jester images and so the idea of tattooing myself into a jester was something that happened naturally. I was already using them to express myself, what I saw around me, and the views I had. Not to mention my love of the character itself. In fact, my first tattoo was a simple jester, and than I got more and more jester-related tattoos until I decided that the jester should be my theme — to transform my whole body into a modified jester through tattoos. It was already part of me, so it made sense — to represent myself with the very character I love and was already communicating through in my art.”

“I try to put great thought into what I get and usually sit on a design for a while, like with my jester face make-up tattoo. I applied many rough drafts, with make-up, over and over again, to make sure it was perfect for me and my facial structure. As for where I get tattooed, I’ve been going to the same guys at Tomah Tattoo in Tomah, Wisconsin for the last thirteen years. The three tattooists, who all have pieces they work on for me, are Steve May, Dave Fox, and Clay Fox. They are three fantastic artists, which is why I don’t go anywhere else. I have the rest of my tattoos, except for maybe one or two, planned out with the three of them.”

I’ve been watching Jester online for some time, and I was struck how he’s always drawing on himself with marker, constantly fantasizing about who he will become and imagining it as real. To give you a better idea of where he’s going with his skin, I’d like to share a recent mock-up. One of the complications he has — as many people who start concept transformations after being interested in tattoos for some time — is that he’s already got a spotty assortment of miscellaneous tattoos complicating large-scale work. However, once the patchwork Jester’s suit is added, it pulls together successfully. 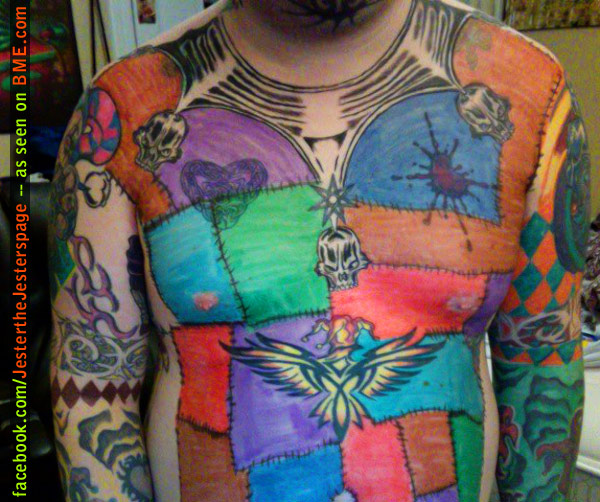 Finally, as he mentioned, Jester is also an outsider artist, creating bizarre paintings that suit his Jester persona perfectly — I wanted to finish up this post by sharing a small selection of his creations. Zoom in for a closer look, or, better yet, take a look at his galleries. Again, you can find him and follow him on Facebook at facebook.com/JestertheJesterspage. 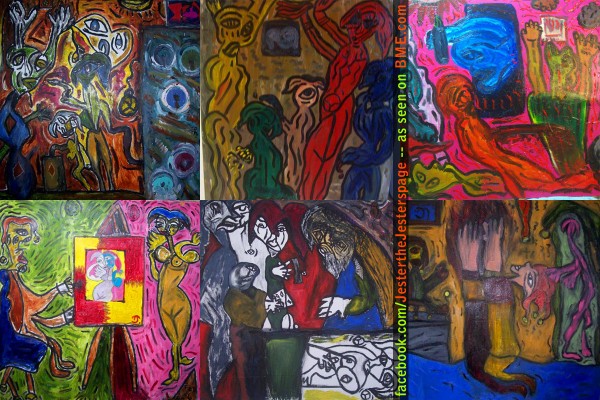