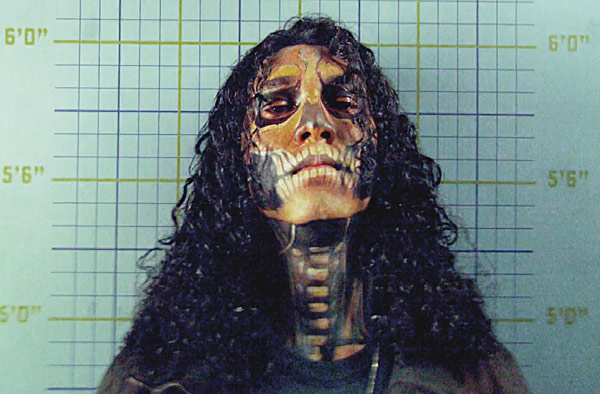 I believe that’s the lead singer of Sküllböï

I was initially pleasantly surprised to see that in the new Dredd movie, Zombie (Rick Genest) seems to play the part of a Peyote Kings gang member, although it’s a brief part because he is almost immediately murdered by the rival Ma-ma gang. Every rigger, gaffer, muffin wrangler, and fluffer is listed in the credits, but for some reason they decided Rico wasn’t worth including among them. Then I realized an odd thing (and maybe someone more familiar with the Dredd franchise has an explanation) — there is more than one person in the movie wearing his skullface tattoos. At first I thought it was a reflection in a mirror, but no, it’s a doppelganger (different hair, and one has stretched ears and the other thin hoops) — and then I realized that the mugshot above likely isn’t Rick either, judging by the throat tattoo. And then I started to become convinced that none of the characters are actually Rick!!!

Like I said, Rick doesn’t appear to be listed in the Dredd credits. I can’t find any mention of him appearing in Dredd anywhere online, and while I’m willing to accept that my google-fu can be weak at times, I find it highly dubious that Rick would make a major appearance in a movie as big as Dredd and not mention it on his blog or facebook page. But ripping off his character rights seems like a shocking oversight for a major film to make… Isn’t it? I think it’s important to note that this isn’t “coincidental”… It’s not as if it’s just someone tattooed like a skeleton. Many specific details of his tattoos have been copied — for example, the spiderweb on his right ear — in a way that makes it obvious they’re exploiting the theft of his character and likeness, and ensures almost everyone will believe it is him.

Here are some side-by-side comparisons… what do you think? Am I imagining this? 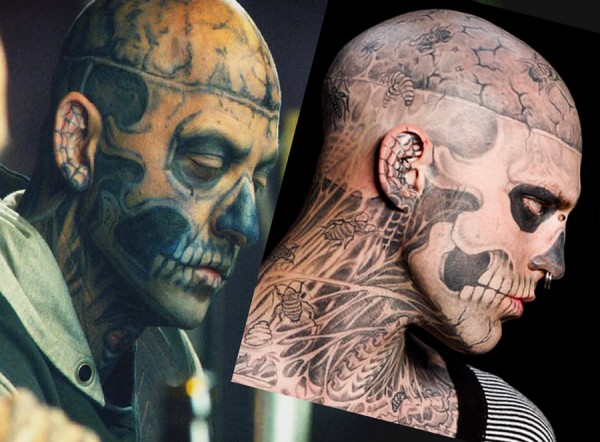 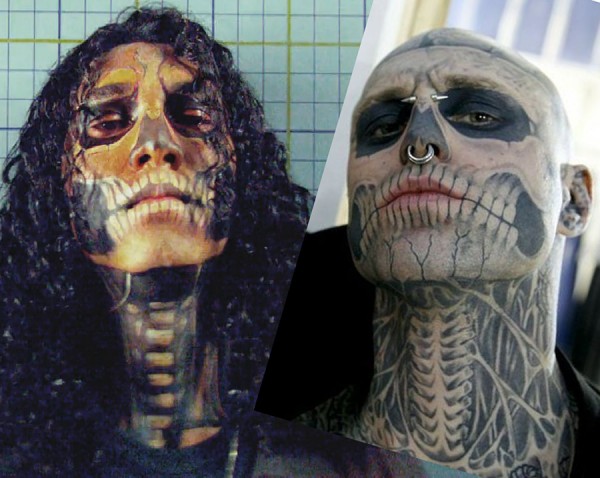 But then I reminded myself that it’s pretty common to see people “draw inspiration” from Zombie’s tattoos and mimic him in various mediums. It’s no big deal if someone makes a YouTube video of themselves in makeup looking like him, but it becomes a problem when a movie rips off the character that Rick has created without getting his consent first — and this is just what happened in the first episode of the first season of the show American Horror Story. One of the characters in the show appears with Rick’s tattoos done so precisely that it’s obvious that it’s been directly copied and he’s the first thing that comes to mind when you see the image. Here’s a pair of screencaps of the episode: 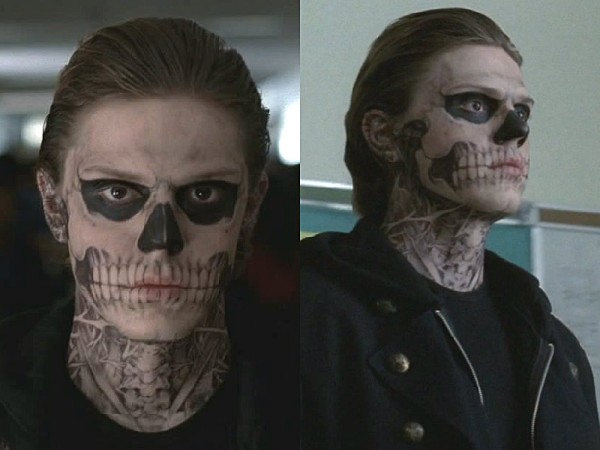 They might have gotten away with this if Rico was still a Montreal gutterpunk, but now that he’s ascended into one of the glitterati he had his lawyer slap them silly and Fox settled out of court for what I assume is more money than Rick had made in his entire life up to the point he was first unleashed on the world with that glib “you call yourself a misfits fan” ModBlog post back in 2006. Perhaps that is what’s happening right now — an ongoing legal matter would certainly explain the complete lack of mention of this online. Ah, the wages of fame.

Well, if anyone knows the truth as to what’s up with ol’Skullboy’s presence in Dredd, please let me know. Either way, Rico really is one of my favorite rags to riches stories — what a wonderful unexpected adventure his tattoos are bringing him.