Lesya Toumaniantz’s radical facial tattoo has recently gone viral, posted on thousands of Facebook pages with captions like “next level face tattoo” from Russia. So I thought it was time to tell the real story behind this remarkable tattoo. 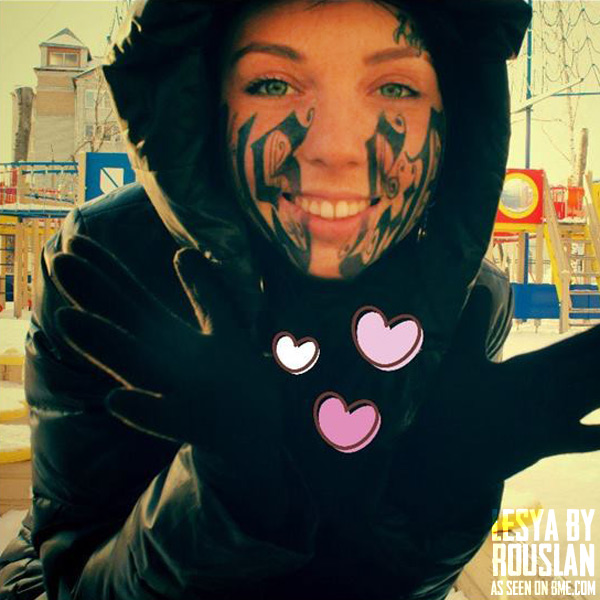 About a month ago, Rouslan Toumaniantz, a well known and sometimes notorious Belgium-based tattoo artist (of Tattoo Box in Kortrijk), and Lesya, a designer living at the time in Saransk, a city in central Russia started talking via chat (Rouslan speaks fluent Russian) and realized they had a lot in common, and quickly began falling head over heels in love. About a week ago they met in person in Moscow and decided to get married — their plans for their life together include her learning to tattoo (Rouslan tells me she’s already a talented artist), apprenticing under her husband-to-be, while she also gets the full-body ink that she’s always dreamed of (biomech is the current plan) — and of course a family.

Her new facial tattoo that’s getting all the attention, a huge commitment for both a person with limited experience as a publicly modified person and for a new relationship screams out the intensity of their commitment to their new life, reads “RUSLAN”, the name of her betrothed. At first glance the tattoo echoes Latin American gang tattooing — MS-13 is the first thing that’s come to many people’s minds — and I worry that it could complicate future travel in the Americas, to say nothing of putting her in danger in some cities (of course, these are places where deaf people speaking sign language occasionally are stabbed when foolish gangmembers assume they’re throwing rival gang-signs). But to be clear, the tattoo has nothing about committing to a life in a gang — it’s a commitment to love.

I know that there are people who are terrified that Lesya has made a rash decision that she’ll regret horribly, but sometimes the best decisions are the ones you make in an instant with your heart rather than the ones long-debated in your mind. I know many people whose favorite mods are the ones they got “on a whim”, and who are still happily married to the person they fell for the instant they saw — “love at first sight” is an old truism — and proposed to within the week. I wish them the best of luck and hope that their life plays out as they dream it to be.

Edit/Update: People have asked why it says “RUSLAN” when I’m writing his name as “Rouslan”. It’s simply because one is the French spelling, and the other is the Russian/English spelling of the name — they chose the latter because it fit better on her face. 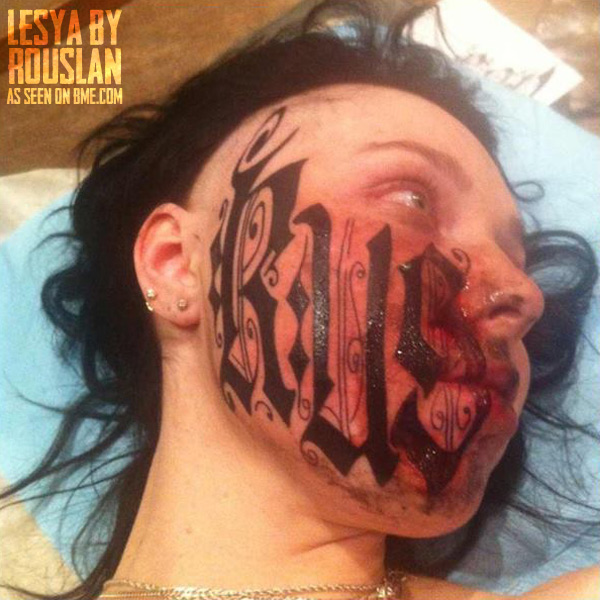 Continue after the break for a more explicit photo.

152 thoughts on “Lesya and Rouslan”