I think there are very few people who worked in a piercing or tattoo studio in the late 1990s that don’t remember chatting with their coworkers at the beginning of the summer season and saying something to the effect of, “well, this is going to be the last big summer.” Piercings and tattoos were so unbelievably popular that it was impossible to believe that the “fad” couldn’t possibly last any longer. Almost all of us thought that one year soon we’d be remembering the nineties as “the good old days” back when mods were still popular.

I was watching Star Trek: Deep Space Nine today and was reminded of those days because of a funny scene that takes place in the episode “Past Tense” (season three, episode eleven) when some of the characters time travel back to the San Francisco of 2024. One of the people who travels back is Jadzia Dax, a trill, who like all trill has characteristic leopard-like spots running down each side of her body from head to toe. 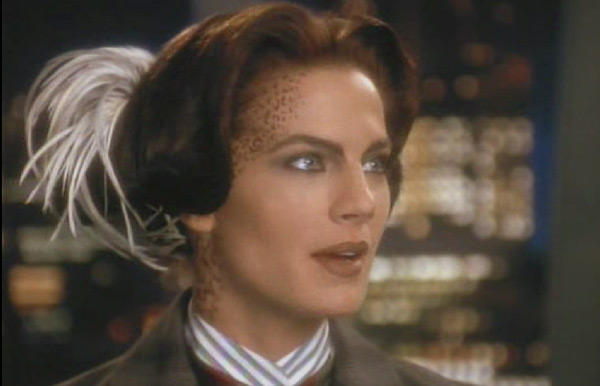 In 2024, humans did not yet know about non-terran civilizations, so Jadzia had to come up with an excuse for her spots. The scene between her and a human she’d met that was helping her out (Christopher Brynner), was quite amusing –

Christopher Brynner: You know, those are very unusual.

Chris: It is amazing work! Where did you have them done? Japan?

Jadzia: How did you guess?

Chris: Well, I used to have one myself… A Maori tribal pattern — used to go all the way down my arm. I got it in highschool, back in the 90s, just like everybody else. Of course I had to have it removed. Well… you know how it is. To get the government contracts, you have to look like all the rest of the drones. So I guess that makes me a sellout.

Because I’ve made it my mission to binge watch every Star Trek episode of every series, I’ve been enjoying the body modification references, both direct references like the one above, and indirect ones like all the different characters and races with tattoos — I thought about making a post cataloging it or adding it to the BME encyclopedia, but then had a bit of a reality check and realized it would be of interest to me and maybe… three other readers.

9 thoughts on ““Back in the nineties””