Tonight (February 14, 2013) AMC will be airing a new reality TV show called “Freakshow”, all about the Venice Beach Freakshow. The cast member who may be of most interest to ModBlog readers is Marcus “The Creature” Boykin, tattooed head to toe and wearing a face-full of self-pierced metal. The name “Creature” comes with a double meaning — he’s not just a creature in the monstrous sense, but also “create-ure” in the sense of creating himself as an artistic invention, a body that is “all original, unlike anyone else’s”, in the hope that he’d be able to not just entertain, but inspire and let people know that no matter how impossible something seems, you can do it.

Here’s the official video profile of Creature from AMC. Following that is a brief chat that we had yesterday letting you know a little bit more about what makes Creature tick — but if you really want to see what he and the rest of Venice Beach Freakshow are all about, don’t miss the show, which begins tonight on AMC at 9:30, 8:30 CST.

** What made you want to move from being a kid into piercings to someone at the “freak end of the scale” — and how did your family react?

My family are hard core Christians, and my mom is still in disbelief, but my dad supports me to the fullest in the craze of body art and piercings. My inspiration came from historical pictures like the Great Omi… warriors receiving scarification, like the great Shaka Zulu, and slaves chastisement as they got whipped and scarred and burned — also Jesus Christ himself suffered out of this world piercings and was scarred beyond any recognition — it goes reallly deeeep… 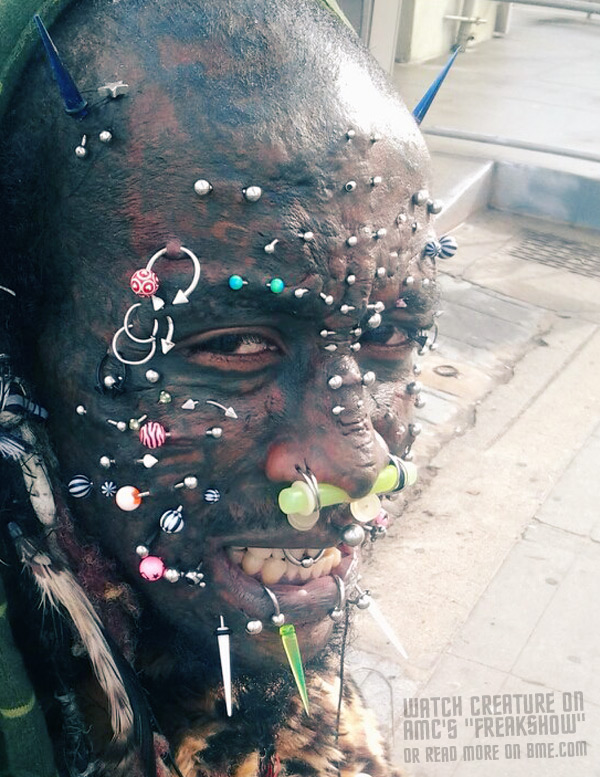 ** How did you get into the industry professionally?

When I was a kid I always was attracted to the arts, and now consider myself a multi-disciplinary artist. I was someone who was always into creatures — that’s why my name fits so well. I first got educated on the industry by going to the store and grabbing ink magazines. I saw the abnormal things featured in magazines like Tattoo Savage, and these influenced my young mind. Even as a kid, I always wanted to entertain, from the art of popping, locking, and breakdancing, and being a creature known as Gizmo and Raver Dayn, as Yoshi, and rebel dancing as him toooooo… I’ve always been into the strange and unusual, so I’m not surprised by my profession. I believe I didn’t choose it — it chose me. 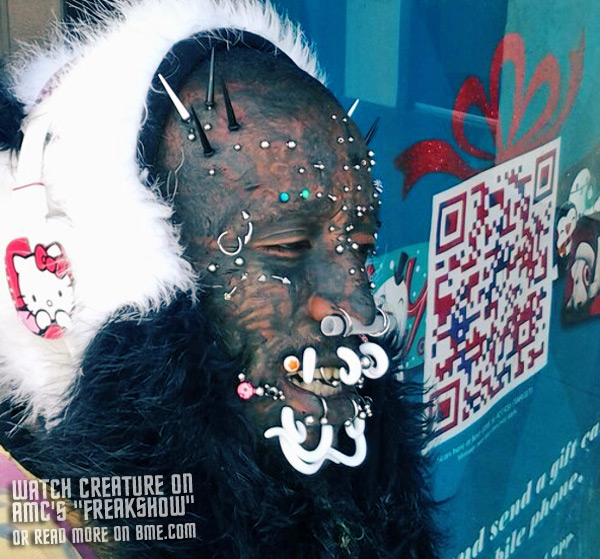 ** Why do you have so many piercings specifically on your face? Do you have issues with rejection?

I have a lot of piercings on my face because I want to fill it completely with surface piercings. Ear stretchings, lips, nipples… a lot of the mods just takes time. Of course I suffer rejection but that’s just a part of the game. I’ve been piercing my own face and tattooing it for years now, and things just keep on improving in the industry so there are endless possibilities. The future holds many new creations in my body mods. It won’t be done until I am dead. 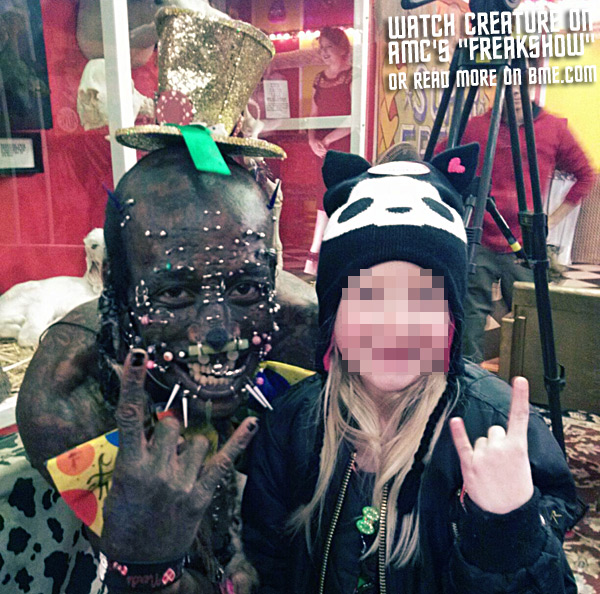 Creature with one of his many young fans

** What are your future body modification plans? Are you interested in going for one of the “most piercings” type records?

As my mods go, I am still adding more and want to continue to lead African Americans in this art form and represent the endless possibilities of our body. That’s very important to me, and in addition to my facial work, I want piercings over my entire body surface. I already hold the record as the most tattooed and modified man in America thanks to my layers of ink, mods, piercings, and stretchings but I’m going for more — of course I will keep delivering the blow! Art has endless possibilities, and I express that through the body as the Creature. 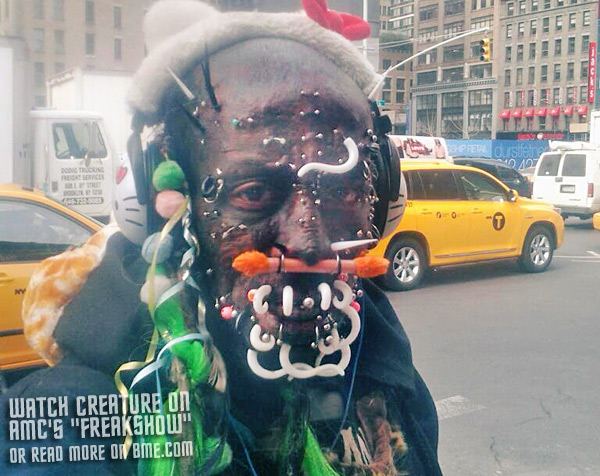 ** What can we expect from you on the show?

Before I started body mod I did body balance circus tricks and planking, part of a world-wide crew I started called “The Freakshow”, and advancing to the world famous LA Breakers, tattooing and evolving my skills and receiving mod work to advance my power. Now as a tattooed man, following in the footsteps of the Great Omi, famous in the sideshow, I love what I do because of the influence I can have on children, telling them to be themselves — that’s what’s it all about. 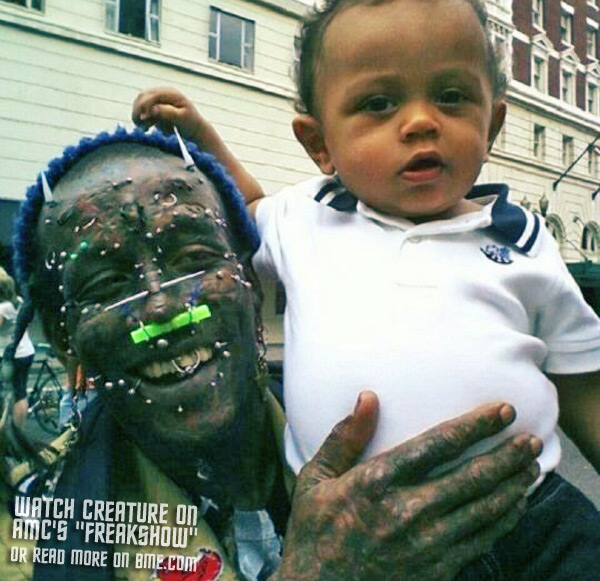 ** Have is been difficult walking this path due to your ethnicity?

Yes. I believe there is a big separation in piercing for minorities versus whites. Blacks in particular, because in modern times they don’t generally do these things, is why I felt I had to lead and do it personally. I believe we as African Americans come from the first culture to do these things historically, especially in the extreme categories like head shaping, lip plates, septum expansions, plugs in ears, lips, upper lips, nose, and of course also scarification and branding… As Americans, blacks have had to walk a straight edge to get jobs, so mods are uncommon. We are forced to look acceptable to work…

** Have there been positive aspects as well?

All the movies I watched growing up were about being black and proud, and I want to express that through my ink. Like everyone, I have an inner warrior, and I found mine through needles of ink and piercing, as well as through modifying my hair… I had my face fully tattooed at age twenty-three. My race helps me with this struggle because there is no one leading in the mod world as a black male, and I wanted to be the real first extreme real black make in the body mod community. 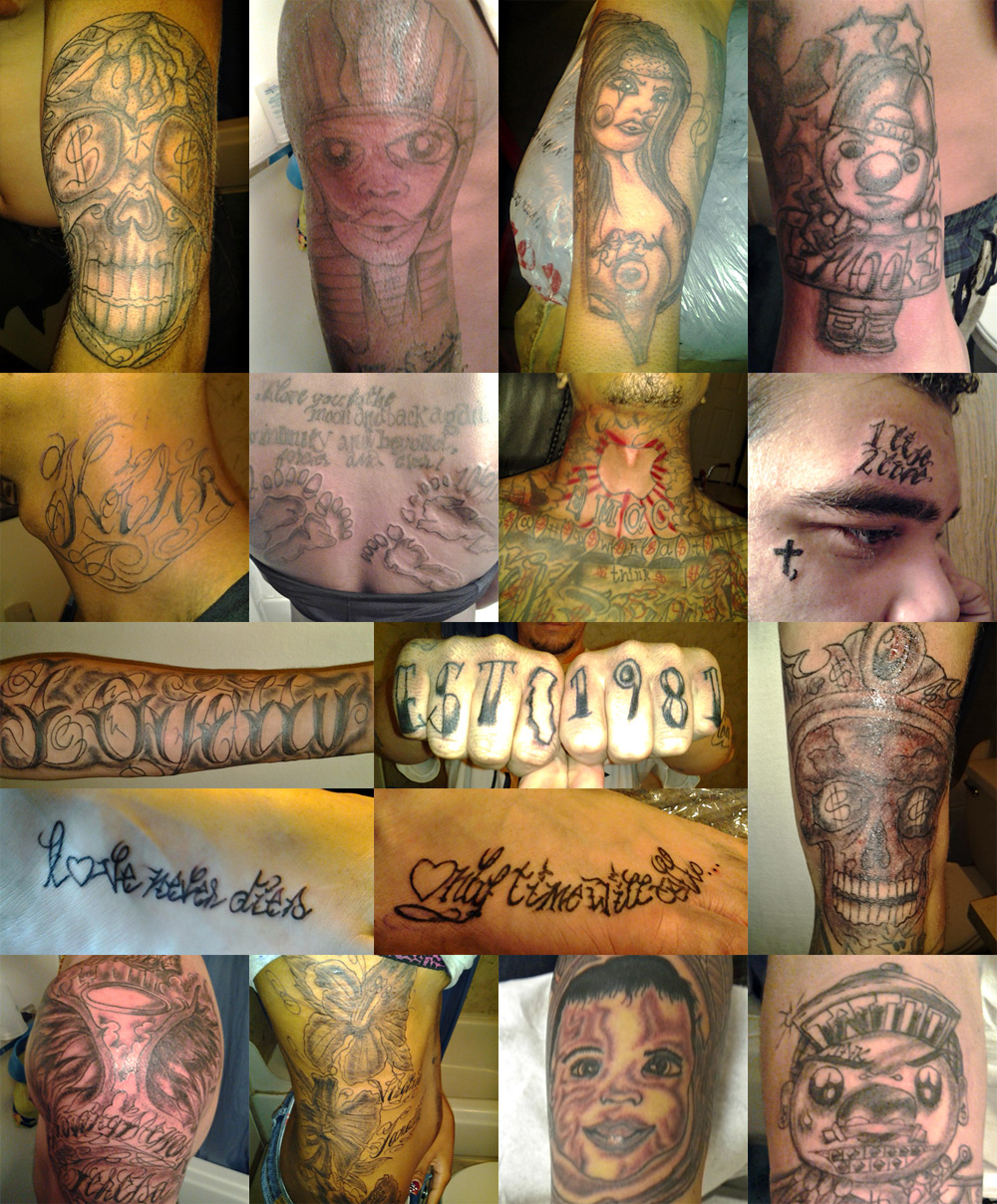 In addition to being in the sideshow and inking himself, Marcus has also worked as a tattoo artist in a classic urban LA style. Here’s a collection of the ink he’s put on others — click to zoom in for a closer look. Don’t miss the cartoon in the bottom right which wears the same nose jewelry as Creature!