I’ve already talked a bit about new procedures that artists are developing to create both new stylistic options in ear pointing while also achieving more “realistic” or “natural” looking results. The latest procedure to be added to this world of fascinating options is one by Brian Decker. I asked him to describe it, and he explained,

“What I do is bisect each upper and lower section to eliminate the rebounding of the cartilage. Fold each section flat down and connect to the outer conch area. This is done with permanent internal sutures. The outer openings are then closed superficially with no tension. Because she’s from out of town, I used all dissolving sutures for the outer closing.”

Pictured below is the first set he’s done using this procedure, so he says there are adjustments he’ll make on the next one from what he’s learned by watching this one heal. In this group of pictures you can see the ear pointing right after it was done, then at about two and a half weeks in the middle picture, and finally at six weeks in the right picture. At six weeks it’s still healing to some extent, so expect the swelling to continue to reduce. 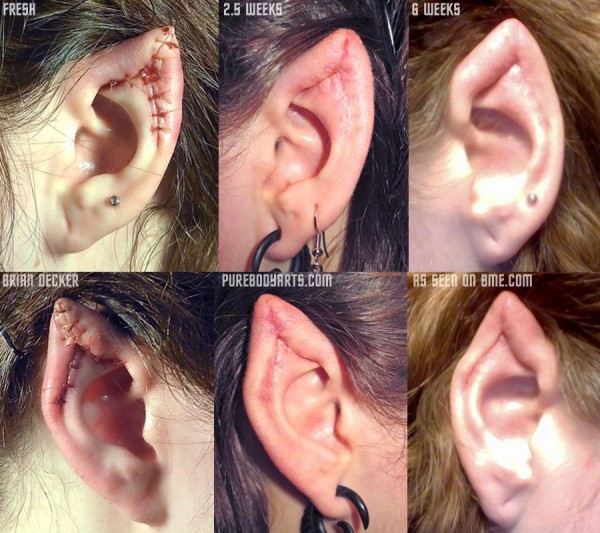 I should also mention that Brian is currently touring, and will be in Des Moines, Iowa from March 5th through the 11th, and then in Columbus, Ohio in mid-April, as well as London, UK in early May (including at the First International Scarification Convention), and then in Las Vegas in mid June. Get in touch with him via his website at purebodyarts.com.