Normally a phoenix is born from ashes, but on Dan Golan’s arm, with a little help from Mika Lazar, the phoenix was born from keloids that he’d had on his arm most of his life. Dan, who lives in Haifa, Israel, has always been interested in tattoos, and like many young people, as a twelve year old had acne on his arms, which ended up leaving him with large keloid scars on his arm that made him quite uncomfortable.

When Dan turned eighteen he got his first tattoo, a small lizard that healed well and he’s still happy with today. While doing his three years of regular service in the Israeli military, four more tattoos followed that first one. Nonetheless, his old keloids from childhood still bothered him quite a bit, and when his military service was finished he started going to doctors to see if they could help get rid of them. They tried some creams and other treatments, but nothing helped, so he started poking around online to see if he could use his love of tattoos to solve the problem. His whole family approved of the idea, thinking a big tattoo — “a medical tattoo!” — would be great.

For his earlier tattoos Dan had gone to lower-end mall studios (“and you know this is not the BEST idea,” he admits), but for this project he knew he’d need someone with a bit more experience and began seeking a qualified tattoo artist in the North of Israel where he lived. Most of those that he contacted were unwilling to tattoo over keloids, but after some repeated recommendations from friends he found himself talking to Mika Lazar (mika-tattoo.appspot.com). Mika had never tattooed over heavy scars like Dan’s before, so she began by tattooing a small line across one of them to make sure the ink held and there was no adverse response. Since there wasn’t and the ink held perfectly, she began the process, which you can see here: 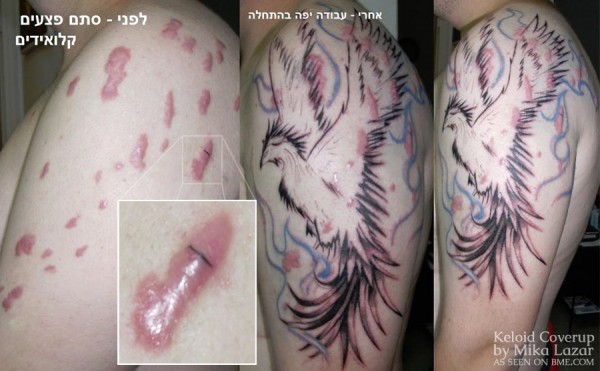 The choice to do a phoenix came about as they were sitting at the studio tossing ideas back and forth until a phoenix that Mika had drawn up earlier caught Dan’s eye. The tattooing and subsequent healing was no different than any of Dan’s earlier tattoos without keloids in the mix, and the tattoo was completed over three sessions (not including the test line) — the outline, the bird, and then the final touches and background. 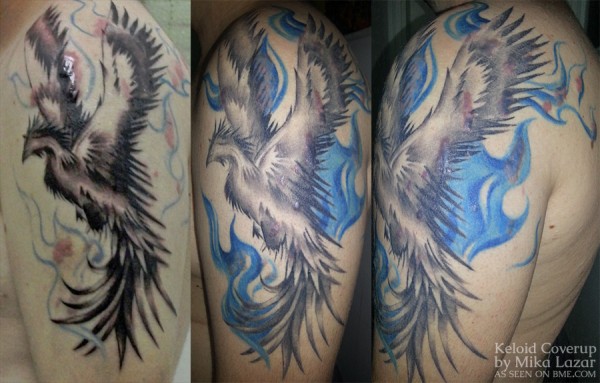 Here’s how it turned out in the end. You can still see the keloids if you know they’re there, but most people won’t notice. Dan’s considering a little more tattooing to mask them entirely, and has not yet decided whether this tattoo is going to stay largely as is, or if it’s the beginning of a sleeve. 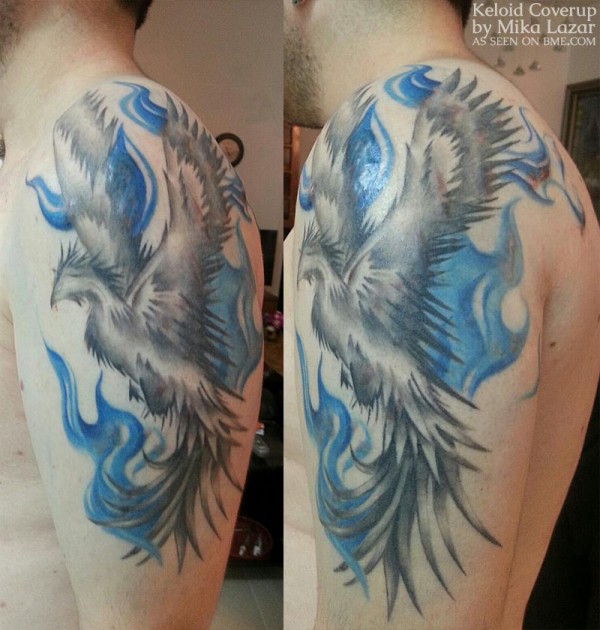 It feels like it’s always the same… All you wanna do is lick a boob, and then — BOOM! — some damn bird decides to roost on your tongue. This moment in frustration immortalized by Andre Cruz Tattoo (andrecruztattoo.com.br). 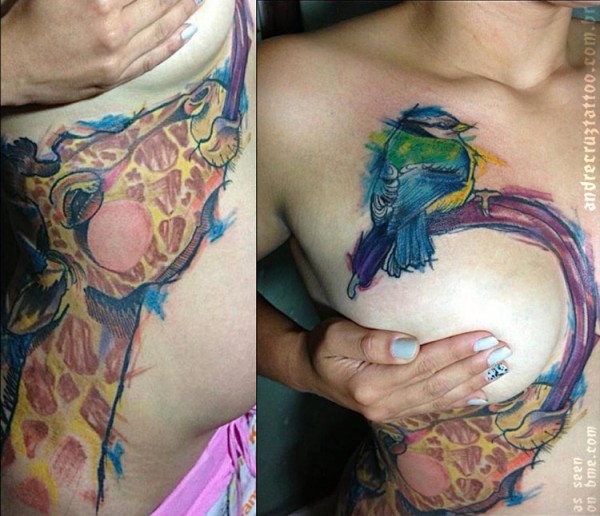 I gotta wonder what’s going through Sophie’s mind. My theory is something along the lines of “just when I thought I understood mirrors…”, but the peanut gallery at the other end of the couch insists that all dogs ever think about is the current location of their next meal and next leg to hump. I should mention that this was done by Luca Font and is on Erica, who you last saw here on ModBlog suspending with her twin sister. 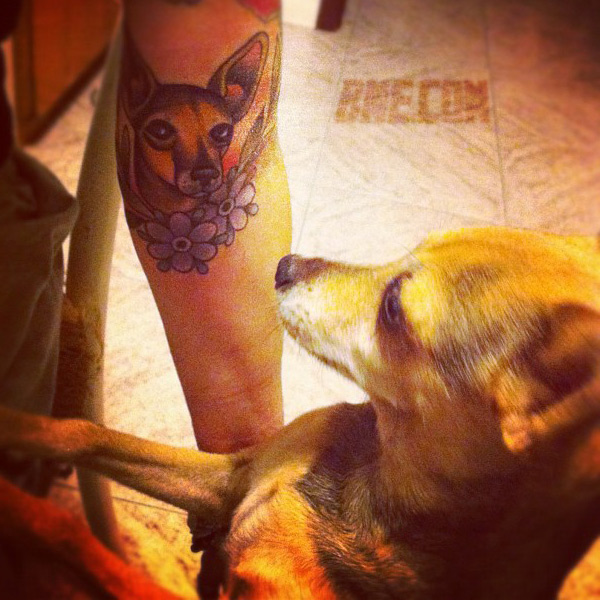 Can you believe we’re only a week away from the start of autumn?  Pretty soon the leaves will be changing colours, the birds will be flying south, and the temperatures will start to drop.  Now I’m one of those that loves this time of year, especially the leaves.  You don’t see much of it in a big city, but outside, where the trees abound, the display that mother nature puts on every year is amazing.  Which brings us to this tattoo by Grzegorz Latoch from Street Tattoo in Warsaw.  It’s a nice rich blend of colours that subtly evokes the arrival of fall.

I think this is a bald eagle, but even if it isn’t, it’s still an amazing tattoo by Wang from Tattoo Temple.

Tattoo artist Jackie Rabbit is someone who is always up for sharing a good story.  When it comes to her memorial tattoos she often takes the time to relay the story in the descriptions of the images in her gallery.  This memorial tattoo is one such piece.

The owner of this piece is a good client of mine and an even better friend. She raises and trains Belgian Malinois for use as military, police, and service dogs. Her dogs are award-winning champions as well as treasured members of the family. Last week she lost her oldest dog Nix. He was a shy and sweet old man. He was her favorite dog and best friend. I was happy to have a part in her healing by being able to do this piece for her. Sleep well old man…you will be missed Nix

He didn’t choose the pug life.  The pug life chose him.

Tattoo by Wang from Tattoo Temple in Hong Kong.

When Sadie got her seahorse tattoo, she had Laura Bonfanti of TRX in St. Louis, MO make sure to place the tail on her elbow so that the little cutie would spend his life swimming around her life, rather than trapped motionless on some prison-like patch of skin.

What’s going on in here?