Former BME columnist Marisa Kakoulas at Needles and Sins just posted a fascinating article on a hand-poked cremation ashes tattoo done in a hand-poked dotwork style by Colin Dale of Skin & Bone in Copenhagen. Colin recently tattooed his friend Eric with Eric’s father’s ashes, mixed with soot to darken the ink, milled together in strong Vodka — apparently human ashes are very light and it helps to add an agent to make the tattoo more visible. Click the picture to visit Needles and Sins for the whole story. 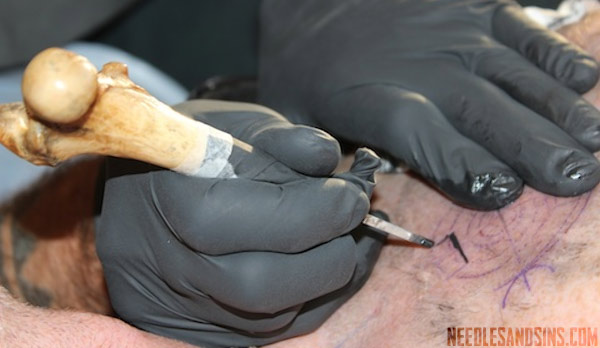 Tattoo artist Jackie Rabbit is someone who is always up for sharing a good story.  When it comes to her memorial tattoos she often takes the time to relay the story in the descriptions of the images in her gallery.  This memorial tattoo is one such piece.

The owner of this piece is a good client of mine and an even better friend. She raises and trains Belgian Malinois for use as military, police, and service dogs. Her dogs are award-winning champions as well as treasured members of the family. Last week she lost her oldest dog Nix. He was a shy and sweet old man. He was her favorite dog and best friend. I was happy to have a part in her healing by being able to do this piece for her. Sleep well old man…you will be missed Nix

Here’s a nice scratch-sketch-style tattoo (for lack of a better way of describing it) by Veronique Depuydt of Original Sin in Belgium. The tattoo memorializes the client’s grandfather, who was the town mayor of a West Flemish city called Bavikhove in the 1950s, and that is who is pictured prominently in the tattoo giving a speech. Much of the rest of the tattoo is made up of a street view of the town at the time — the church of course, as you’ll find in all European towns, and also the old town hall, and flax drying between them, which was once the scene in all the fields in West Flemish towns of the past. Behind his grandfather is an old bottle of Bavik beer — the local brewery still exists — and the most famous bar as well (In’t Damberd). The gravestone near the bottom for his brother who has passed away. This tattoo with it’s stark style, devoid of shading and made up of only powerful confident scratches, I think will age absolutely beautifully, and unlike many tattoos, will actually look better and better with age — to say nothing of being stylistically quite unique.

When it came time to honour their father’s memory, this family flew in from all corners of the globe to gather at Tattoo Temple.  Joey Pang, before she was a tattoo artist, studied calligraphy, so when she sat down to tattoo these symbols she was able to use the same brush strokes, while varying it to suit each individual.

Pet memorial tattoos are becoming more common these days.  Then again it could just be they’re being submitted more often than they were in the past.  In any case, this memorial to someone’s best friend was done by none other than Jackie Rabbit.

Memorial tattoos are always filled with emotions for the wearer, however a memorial tattoo of a child is just heartbreaking to everyone.  Jackie Rabbit did this portrait for her friend Natasha.  Here’s what she had to say.

When my friend Natasha asked me to do a portrait of her daughter that had passed on I was honored but also pretty nervous. It was only my second portrait but we both had faith. Taylor Makenzie was born with a terrible degenerative disease. The photo we decided to use was one of the last taken before she passed away. Despite her pain and even having to wear a breathing tube much of the time she did her best to stay upbeat and always had a smile for everyone one. She was only on this earth for a short time but her sweet nature and brave soul touched the hearts of everyone that was lucky enough to meet her.

In addition to being a month dedicated to facial hair, Movember is also a month for testicular and prostate cancer awareness.  Granted all cancers are bad, but like breast cancer, early screenings can help reduce the number of lives lost every year, which is what the awareness campaigns are all about.  Now for this memorial tattoo, a client of Jackie Rabbit‘s lost his father to cancer after battling it for many years.  While I don’t know exactly what type of cancer it was, what I do know is that this particular portrait was chosen as it depicts his father at one of the happiest times of his life.  He wanted to remember him not as the frail person he became at the end, but rather the man that was full of life and joy that he knew so well.

Tattoos can have intensely personal significance to those who get them.  We all know this.  This particular tattoo by Jackie Rabbit is one of those.  The owner is a friend of Jackie’s who has led a life of hardship and struggle.  However at this point in his life things are finally looking up, and this tattoo celebrates that.  It is meant to symbolize him rising above his struggles, becoming a better person because of them.

The memorial tattoo gallery is one of the newer galleries on BME, however it’s quickly filling up with some fantastic pieces.  Memorial tattoos always carry a strong emotional tie with the owner as they serve as a permanent reminder of loss.  This one in particular serves as a reminder that just because our pets aren’t human, it doesn’t mean they don’t play an important role in our lives.  This one was submitted anonymously, but it shows just how important this one furry family member was to someone.

When Lyell Cook passed away a number of his friends decided to get memorial tattoos.  Since Lyell was tattooed by Keegan Lam one friend decided to fly from New Zealand to Halifax to get a memorial tattoo done by him.  The mandala in the center of the piece is the same one that Lyell had on his chest.