While snooping around the Very Unusual Piercings I found this photo which is…very unusual. A double navel piercing uploaded by SaintMary in 2004 that is a bit more interesting than it might sound. 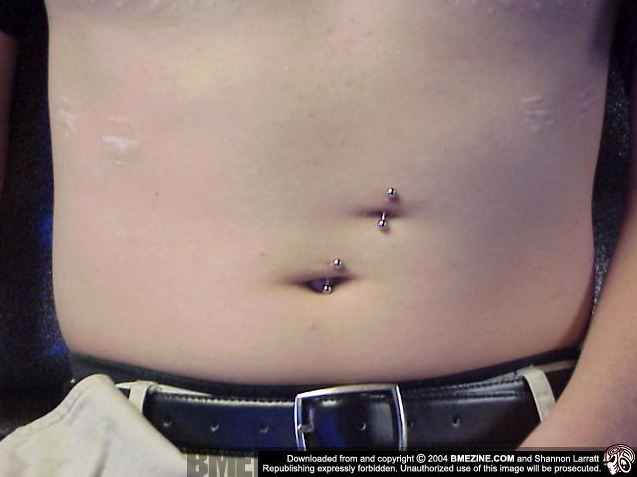 Two is better than one.

Now since this is an older photo (2004 is so ancient right?) if this has been covered before I apologize and give you permission to yell at me in the comments. Click through to see the closeup!
END_OF_DOCUMENT_TOKEN_TO_BE_REPLACED

Recently I got into an interesting conversation with my friend Joseph about what unique mods could be done in his ear — that’s it on the left in the photo — since it has a slightly atypical shape, almost like a pointed ear. But what really blew my mind was when he showed me a picture of his brother’s ear (that’s it on the right), which has a similar but more pronounced atypical shape. Their younger brother apparently has a similar ear as well. The even stranger part of the story is that it only affects their left ears! So what do you think? Is there a gene that we could select for that would let people be born with pointed ears? Or do you agree with my sneaking suspicion that Joseph’s parents are mad scientists that have been doing experiments on their boys? It would explain their 400 IQ and ability to bench press a car. Either way, it’s pretty cool being born with naturally “modified” ears — how funny is it that they could probably show up at a tattoo convention and get people coming up and saying, “I love your ears? Who did the work?” 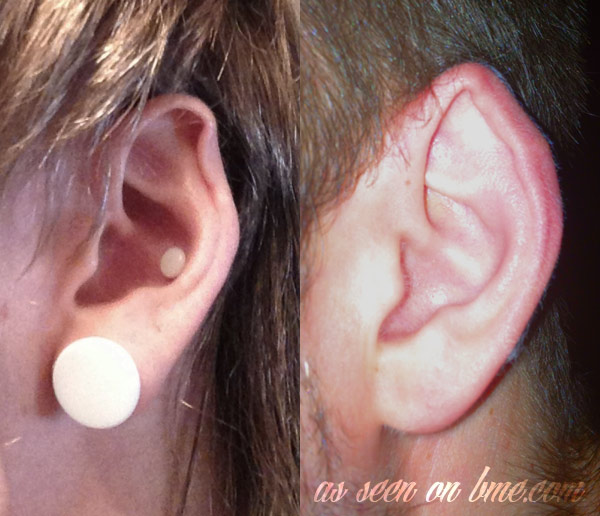 But seriously, I often think that genetic engineering is the future of human modification, once we get over our ethical hangups. It’ll never replace body modification of course because it completely removes the individual expression from the equation (since your genes are dictated by those who create you), but when it comes to really transforming ourselves, there’s not much that compares to genetic manipulation. Hell, it turned us from ape-like primates — from some sort of fish — from single-celled nothings — into the pinnacle of planetary dominance and destruction we are now. Don’t believe me? Ask Khan Noonien Singh! Bring on the Eugenics Wars! Create the Augments!

The client in this picture walked into Saint Sabrina’s in Minneapolis (saintsabrinas.com) to have Courtney Jane Maxwell do an industrial for her. Courtney, seeing one of those rare ears that’s got enough of a developed helix fold to actually tuck a piercing into, convinced her to skip the industrial and get a set of piercings that very few people could, using two rose gold pave disks and a gold teardrop. This is one of the big arguments for going to a higher end shop with experienced creative piercers — the standard shop would have just given her the industrial, but since she went to Saint Sabrina’s, she’s now got one of those rare and special piercings that looks deceptively normal, but to those familiar with piercings jumps out as something really unique and unusual. 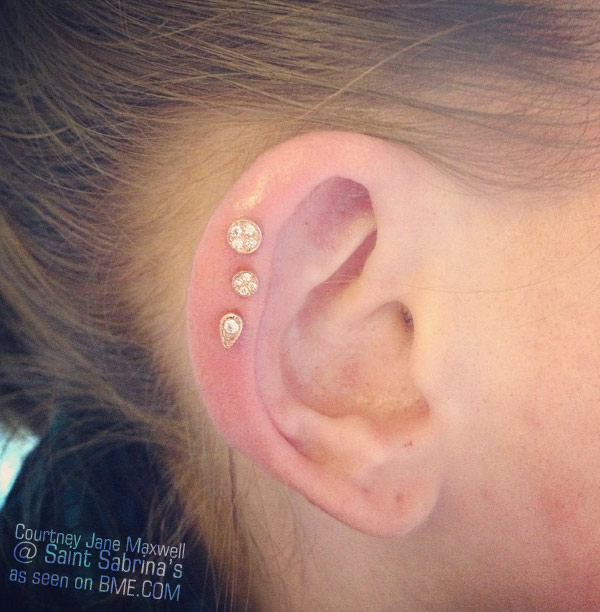 Ash Bagwell, piercer at The Machine Shop Tattoo Studio in Conroe, TX just got the rare opportunity to do what is I think best described as a daith piercing, but it took really taking a hard look at the anatomy to be certain of that. It’s not 100% clear from the photo so I’ll clarify that this is an actual piercing through an unusual fold of cartilage, not a ring wrapped around a free-floating bridge of tissue. Ash did the piercing using a 16ga needle which she slightly curved, into a receiving tube. It’s always a treat when people don’t try and hide their unique anatomy, but instead glorify it with a piercing or other modification! 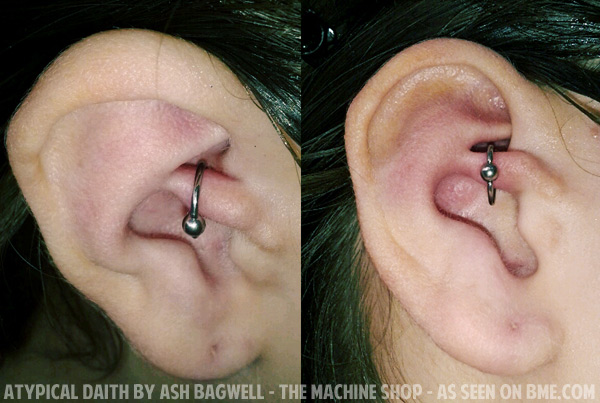