Wow, I never thought this idea for piercing jewelry-attached eyeglasses patent would actually make it into production (it’s different than the pierced eyeglasses that BME has covered in the past). Barry sent me a link to what appears to be a commercialization of that patent, “ATTITUDE“, a pair of sunglasses that clip onto your eyebrow piercings rather than resting on your ears.

How stupid is commercializing that idea? I’ve got no problem with “experts” (people who understand their bodies) playing with things that don’t always work, but don’t push this stuff on a market that may not know better. I mean, unless the goal of the product is to get eyebrow piercings to reject, I just don’t see it being worth it. And anyone who really is in “the committed depths of Body Modification” (as they claim to be) should know that. It doesn’t matter what release mechanism you build in — even tiny amounts of pressure on an eyebrow piercing can radically speed up rejection. 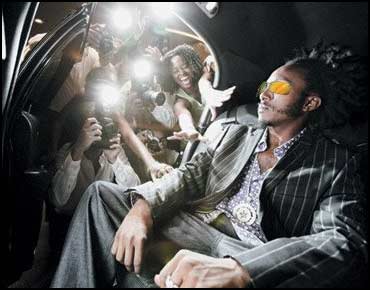 Yes, you too could be this cool.
PHOTO: DOATTITUDE.COM

Well, I suppose there’s a sucker that doesn’t know any better born every minute — after all, think about how many people are perfectly willing to wear low-grade dollar-wholesale (or less) barbells (I’d say 90%+ of the market). Maybe they’ll make lots of money off this, and I’m sure they’ll even be able to find some leather skinned people who can wear them in the long term and post here complaining that rejection is not a risk… but personally I wouldn’t wear these if I cared about keeping my piercings as long as possible.

31 thoughts on “Attaching sunglasses to piercings?”