These doctors were certain they were saving their patients from themselves. Unrestrained, boys were likely to re-create the terrifying example of a French shepherd named Gabriel Galien, whose case was described in 1792 by the surgeon François Chopart. According to Chopart, Galien became a compulsive masturbator at age fifteen. Over time, however, normal stimulation was insufficient for climax, and Galien began to tickle his urethral canal with a long wooden splinter. His occupation allowed him the solitude and free time to perfect that methodology. But eventually Galien became inured to this new technique as well. So he used a knife to make a long slit on the underside of his penis, attempting to enlarge his urethral passage. This (at first) shallow incision, Chopart wrote,

which in any other man would have produced the sharpest pain, instead procured for [Galien] an agreeable sensation and complete ejaculation …. Finally, given all the effort of his passions, he managed, after a thousand instances, to slice his penis into two equal parts.

Emphasis added by me — I’m going to guess that 1792 is the first medically documented case of subincision and genital bisection in the West (and perhaps also a very early reference to sounding I suppose). Anyway, this headsplit below is on my old friend Hornet (check out his bonus gallery in BME/HARD for lots of great play pictures as well if you’re into it).

Unrelated point of trivia: Chopart’s technique for mid-foot ampuation is still occasionally in use today — you have to admit “Chopart” is a pretty awesome name for a dude that invented a kind of ampuation! 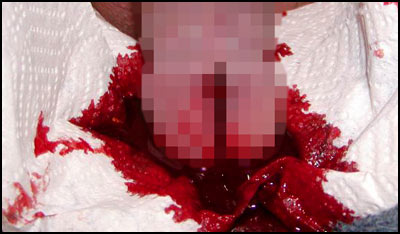