OK, maybe Internet vitriol doesn’t quite count as breaking news, but when it’s as enjoyable as this, it deserves its own headline. Local hothead and 9/11 Truther Anthony Bosco really, really doesn’t like your stupid tattoos. Hates them! And by golly, he wants you to know it.

Tattoos are nothing but a commitment towards future embarrassment and ridicule. You may think that who you are now will never change. And if you are a wilfully ignorant or narrow-minded person who will always refuse to change their perspective on the world, irrespective of how much things around you change, you may be right. At least in terms of your mental retardation, anyway. But, what you are most certainly incapable of retarding, is the inevitable physical changes to your body as you begin to age.

And yes, I have heard all the argument before…”It’s okay if I get saggy and my tat ends up looking stupid, because I’ll be old and covered up anyway, so no-one will see it”. Really? Isn’t people seeing it the whole point of getting ink injected permanently beneath five layers of dermis? Because this excuse sounds an awful lot like an admission of the temporary relevance of whatever statement, symbol, character, etc. you have had tattooed to your body.

He says what we’re all thinking! But wait, there’s less:

And before anyone pulls the “But I got my children’s names tattooed across my heart because I’ll always love them” card, just hold up a minute. You can’t be serious, can you? If you need a massive tattoo across your chest, back or forearm to stand as a reminder of how much you will always love your children – then you really don’t love your children! You just want other people to think that you do. People who really and truly love their children do not need to advertise it on their flesh!

Now, this is something with which I agree. Displays of affection for loved ones? Over it! While we’re at it, all you poseurs who hang pictures of deceased family members in your homes? Cut the crap. We know you’re just trying to trick visitors into thinking you loved Grandma. God, you are so selfish.

Elsewhere on the Internets, Tyler F. Williams unleashes the hate for Danielle Lloyd — allegedly some sort of British pseudo-celebrity — who just recently got this transliterated Hebrew tattoo: 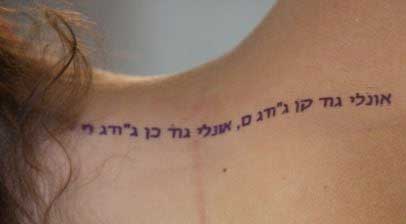 Williams, a scholar of religion and theology, took issue with Lloyd’s facacta ink:

Not only is the tattoo gibberish; it isn’t written in Hebrew (i.e., the language) at all! When I first looked at the pictures of the tattoo, I couldn’t figure it out. It wasn’t Biblical Hebrew. I didn’t think it was modern Hebrew. I was looking up words in my modern Hebrew dictionary and starting to think that I shouldn’t be teaching Hebrew this semester! Then I figured it out. The tattoo isn’t written in the Hebrew language, but is English written with Hebrew letters! If you transliterate the Hebrew characters into their English counterparts, voila!, you get the supposed translation: “Only God can judge me, only God can judge me.” What makes this even more silly utterly ridiculous is that the transliteration isn’t even consistent. In the first occurrence, “can” is spelled qof-nun (קן) while the second time it is spelled kaf-nun (כן). Not only doesn’t Danielle know Hebrew, she apparently doesn’t even know how to spell “can” in English! (I won’t even comment on the rest of the supposed transliteration)

If there was a prize or award for the dumbest tattoo, this should certainly win. I just can’t believe it… this is beyond stupid.

In all fairness, Williams’s objections are based in the fact that the tattoo is an affront to his passions and his studies. Bosco is just a dick.

A tattoo is a permanent reminder that you are an idiot [Anthony Bosco’s Weblog]
Danielle Lloyd: The Dumbest Hebrew Tattoo Yet! [Codex: Biblical Studies Blogspot]