I want to share with you this alluring scarification done by Italy’s Alicia Lady Mamau (ladymamau.tumblr.com). The cutting is well scarred at ten months into healing. For those that don’t already recognize it, this is the triple moon Wiccan goddess symbol, which refers both to the Goddess and the phases of the moon. 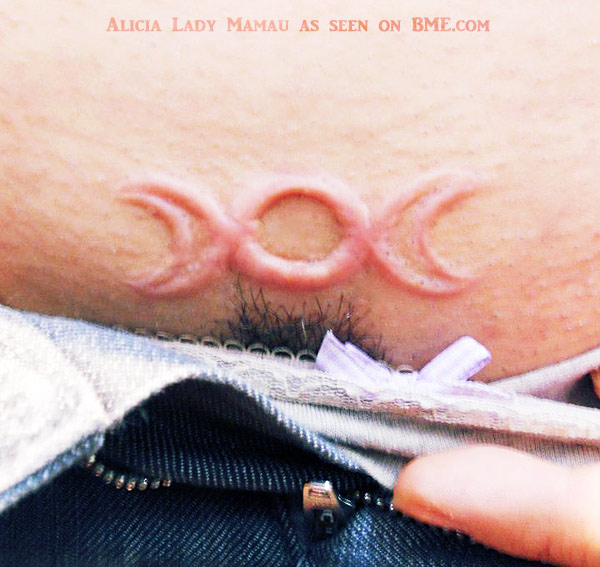 Love sometimes warrants sacrifices, and what bigger sacrifice than allowing yourself to be killed to forgive mankind of its sins.  Well the folks at #Leeds Airlines decided to recreate that sacrifice in the only way they knew how.  By actually crucifying one of their members.  Please note this is extremely dangerous and shouldn’t be attempted without proper research and a lot of experience.

Oh man, I’ve been waiting for this follow-up every since I posted about this scar back in June.  Thankfully Richard “Effin” Ivey was able to track Velo down to grab another photo of the scar six weeks into the healing process.

You know, come to think of it, Evan there deserves a BMEBoy tag on this post.

Ganesha is a deity the represents a number of things.  He is the remover of obstacles, patron and arts and sciences, and deva of intellect and wisdom.  Portrayed here as a cutting, one could interpret this piece as Ganesha removing the obstacle, in this case the skin, to allow the person to become who they want to be, using the art of scarification as the method of their transformation.  Richard Effin Ivey has been putting out a lot of cuttings with spiritual connotations, and each seems better than the last.

Wow this week seems to have flown by.  We’ve had ear pointing, foot tattoos-a-plenty, an interesting round of “Guess What?”, and of course the birthday of our own Sean Philips.  Now that Friday is here, it’s time for this week’s follow-up.  This week we’re looking at a scar we saw just over a month ago from Misty.  Her Santa Muerte scar blended in Catholic imagery of Mary to create a good looking scar.

To see how it looks today, you know what to do.

END_OF_DOCUMENT_TOKEN_TO_BE_REPLACED

Those of you familiar with Jainism will recognize this symbol right away.  For those that don’t, the palm with the wheel signifies Ahimsa, one of the main principles of Jainism.  It essentially is a symbol meaning to do no harm to any other living creature.  Seeing it in this form is interesting, as the creation of this involved not only cutting but branding as well, both of which are pretty harmful.  So who better than a minister then to create this piece.  Richard Effin Ivey is a minister with the Church of Body Modification, and part of his personal beliefs is using modification for spiritual growth and harmony.  Richard serves as a conduit, bringing his faith and skill into his work so that the owner of this scar will take away something that will be with him forever in body, mind, and spirit.

Over the past 6 months we’ve been following the progress of Southtownbaby’s scarification work.  As a new scarification artist she’s been sharing with the community and listening to the feedback.  In her latest scar, she tackles the image of Santa Muerte, the Mexican saint of death.

You can see more of Misty’s work in her BME Portfolio Gallery.

My only complaint is that TrickyDick didn’t take more photos of this.  The image of Thích Quảng Đức‘s self-immolation has been burned into the collective consciousness of the world since that fateful afternoon in 1963.  Granted most people just recognize him as the burning monk on the Rage Against the Machine album, but his contribution to history will be remembered by Buddhists as long as they’re around.

Feel free to harass Rich to send in follow-up photos to the scarification galleries.

Ladies and Gentlemen and everyone in between, I’d like to present to you, hailing from Quebec City, in his twentieth appearance on ModBlog, IAM’s own Efix!

I’d say a round of applause is in order, not only for this being his 20th feature, but also for making such an incredible scar of the Ashtamangala, the 8 Auspicious Symbols of Buddhism.  I could go on about the spiritual meanings of each of the symbols, but I think I’d rather just take a look at the scar, and congratulate Efix on reaching this milestone.  You can see even more of his work over in his own scarification gallery.  As for the owner of the scar, the only thing I know is that according to Efix, he is “one tuff motherfucker”.

Disclaimer:  Efix may have been featured more than 20 times, I’m just going by his count on his IAM page.

Hot on the heels of our esteemed religious coverage from earlier this week, Andrea at White Light Tätowierungen in Berlin, Germany, sends in this photo of a cutting she did months ago, well along into the healing process and looking pretty fantastic, yes? Yes. Sure, the Owl God is nowhere to be found, but He’s always there in spirit, hootin’ the night away, swooping down to swipe rats and beetles out of the soil for all of eternity, amen.