[Toronto Star] Well, it was probably only a matter of time before the Moonshin Tattoo business found its way back into the news. To recap: Earlier this year, it was revealed that local health departments in Ontario, Canada, were neglecting their duties with regard to regularly inspecting tattoo shops and, as a result, some shops were found to have been neglecting their own record-keeping (and other) practices, throwing into question their sterility and safety. Mississauga’s Moonshin Tattoo in particular caught fire because of this, and both the shop and Peel Region found themselves the subjects of a $20 million class-action lawsuit by customers who may have been exposed to HIV and hepatitis B and C. In light of this, the Toronto Star launched their own investigation, and the results are pretty hit-and-miss:

Every public health unit in the [Greater Toronto Area] has failed to enforce provincial standards that require tattoo and piercing studios to be inspected at least once a year, a Star investigation has found.

Peel, with the worst record of tattoo parlour inspections for both years in the Star study, checked on only seven of its 20 establishments in 2007 and only five in 2008.

Halton Region also fared poorly in the study, with only 47 per cent of its 15 establishments inspected both years. Toronto inspected only 65 per cent of its 23 parlours in ’07 but had a perfect year, in ’08, when there were 41 parlours.

A variety of reasons were offered for missed inspections, but most common was a lack of funding after the province made regional health authorities responsible for such inspections a decade ago.

“We’re talking about guidelines that have been in place since 1997, so this is not something that’s been sprung upon the health units,” she said.

While it’s heartening to see a few regions taking their responsibilities seriously, there are some egregious stats mentioned there. The logical extension of this investigation, it seems, would be to determine if these inspectors are dropping the ball in all areas of their work—as the article mentions, at least as far as Peel is concerned, their inspectors are also responsible for “more than 5,000 food premises, 500 recreational water facilities and 150 child-care centres”—or if their neglect has been limited to premises offering body modification procedures? (It’s also addressed that inspectors failed to visit “ear-piercing establishments” with regularity.) It’s paranoid to assume there’s some insidious blueprint being followed here, but if these failures are largely occurring at the expense of body artists, that seems worthy of some attention, no?

(Of course, if Ontario artists want to keep on top of things without prompting from the government, they can always get their Health Educators certification when David Vidra comes to Toronto next week, here and here.)

[Daily Mail] Several thousand astute readers have sent in this article today, so, yeah, we figured it was worth some attention, as unbelievable as it is. Anyway, as the story goes, Kimberley Vlaminck, an 18-year-old living in lawless Courtrai, Belgium, went in to get three harmless stars tattooed on her face by Rouslan Toumaniantz at The Tattoo Box, but, uh, fell asleep? Or was drugged? And somehow woke up with 56 goddamned stars covering half her face? What?

She claims she fell asleep while he was doing his work… and awoke to ‘this nightmare’.

‘It is terrible for me,’ said Kimberley. ‘I cannot go out on to the street, I am so embarrassed. I just look horrible.’

‘I think he didn’t understand what I wanted. He spoke only fractured English and French.

‘But I explicitly said in my native tongue, French, and also in a little bit of English when he looked confused, that I wanted three little stars only near my left eye.’

Rouslan Toumaniantz, who runs the tattoo parlour called The Tattoo Box in Courtrai, denies her claim, saying she knew ‘exactly what she wanted’.

He added: ‘She was awake and looked into the mirror several times as the procedure was taking place. The trouble all started when she went home and her father and boyfriend threw a fit.

First things first: I have a hard time believing any of this is true. I don’t know what the game is, but I want to go on record as saying I won’t be surprised when and if this is exposed as a hoax. However, if any of it is true, I’ll gladly adjust my verdict to say that I think young Kimberley is full of it. Not to be too much of an armchair physician/psychologist/mind-reader/whatever, but falling asleep while someone drills 56 stars into your face? Come on now. I think we can all agree this is preposterous. The argument could potentially be made that the artists should have maybe not tattooed the hell out of an 18-year-old’s face, but her reaction seems downright pathological. If any of this is true. Which I don’t think it is.

[Craigslist] And finally, here is a HOT NEW TREND that will surely be hitting a city near you, soon! As the RECESSION continues and people can NO LONGER AFFORD TATTOOS, how will they manage to keep inking themselves into UNEMPLOYABILITY? The answer, of course, is PRESCRIPTION DRUGS: 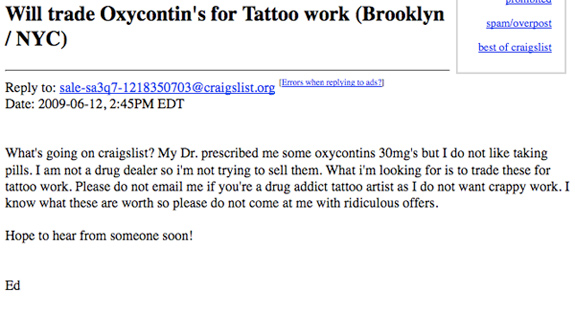