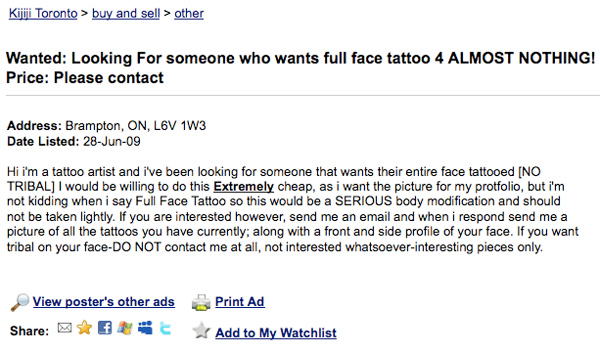 [Kijiji] I’m warning you all right now, this is going to be an extra-stupid edition of our beloved news roundup. Like, seriously. There is nary a redeeming quality to be found among today’s record of idiocy, whether it’s the subjects of the stories or the fact that the stories themselves even exist in the first place. Let’s start with this Kijiji posting, beckoning one and all to contribute to this citizen’s tattoo portfolio by submitting to a full-facial tattoo. It is very important that this person pad his or her portfolio with a very impressive full-facial tattoo—so important, in fact, that it will be done nearly practically free! As long as you don’t want any tribal, of course. Tribal is for assholes.

[Help Me Sue] Oh Jesus Christ, if you are eating your celebratory (and mandatory, damn it) Independence Day fried chicken, you may want to put it down (or eat it extremely quickly) before clicking that link. First of all, there is actually a web site called “Help Me Sue,” which is just tremendous, and it evidently exists to help people wronged by The Man (or various men) find a lawyer appropriate for one’s respective situation. Well, someone is having some problems with a tattoo, from the looks of things (all [sic]‘d):

Myself and two other co-workers went to a new local tattoo parlor in Morgan Hill, California. We all got the same tattoo and we all got bad infections. Within the two days our ankles swelled three times the size and was oozing all the color and green stuff. We let it ride because we understood that the foot area was very painful in regards to healing. We went back to the tat shop to find the owner and his wife and showed him our feet. His first response was “Oh shit, he went way too deep, that artist is out of here. Don’t worry, he won’t be back!” At that point we told him that we were pissed and we were going to seek medical attention because our legs had became so sore that we had to miss work and the crust from our tattoo kept cracking and seaping. My friend was the first to go seek medical advice then myself. It was confirmed that it appeared we both had Staf infections and were given antibiotics for severl weeks. The artist finally cared enough to contact us and even admitted he may have went to deep and that he would only refund our money and fix it. He then told us that we would fix it at the shop where we got it beacuse he still worked there! We then decided to run in their business lic because they had one on the wall in the shop. It happens that they do not have a license but rather one is pending because the Enviromental Health Dept. still hadn’t inspected their facility.

And wouldn’t you know it, it’s actually a lot grosser than it sounds! There’s a nice little area of necrotic tissue pictured, which, as we all know, is the primary symptom of…a tattoo artist going too deep? What? Hey, I’m no doctor, but I’m pretty sure you don’t pick up a necrotizing Staph infection because your artist has a heavy hand. Anyway, folks, best of luck in your lawsuit. Care to make it class-action lawsuit? Eh? Eh? C’monnn.

[NJ Star-Ledger] So here’s a fun game to play: Go to Google News, type “Bagelhead” into the query field, look at the results, and then punch yourself in the dick/balls/ovaries/whatever hard enough that you will never, ever breed, thus saving your potential offspring from the horrid fate of having to share a planet with the reporters responsible for this new “BRAND NEW FAD” non-story. Apparently, some Japanese youths have started experimenting with inflating their foreheads with saline solution (as our old friends Jerome, Ryoichi and others have been photographed doing in the past), and of course, since something need only exist for it to become a fad, this is now a fad sweeping the sleepy fishing village of Japan. Oh, and apparently the people who are doing this are being called “Bagelheads,” because what would a dumb non-story be without the most outrageously stupid moniker imaginable attached to it? Hooray.

[Popcrunch] And finally, famous singer person Rihanna is going to jail, forever, for giving someone a tattoo. Apparently she thought it’d be a real hoot to pick up a tattoo machine while hanging out in New York and give some folks some little umbrella tattoos, except those photos were published (by the MEDIA), and now it’s been revealed that she was not properly licensed to be a tattoo artist, or something, so she will be put to death, the end.