Babies, babies, babies. Doesn’t it seem like everyone you know is having one right now? In the middle of trying to figure out what to post about I got the news that another friend is, you guessed it, “expecting”. It got me thinking about how many people I know who are either expecting or have recently had babies, and then I realised that the majority are women I know from IAM! Imagine that. So I’ve decided to put together a series of interviews with some of my favorite modified moms.

To start of the series, we have Molly, a young hip mom to daughter Audrey. Or, as she calls her, Odd. Click “read more” for the full interview. 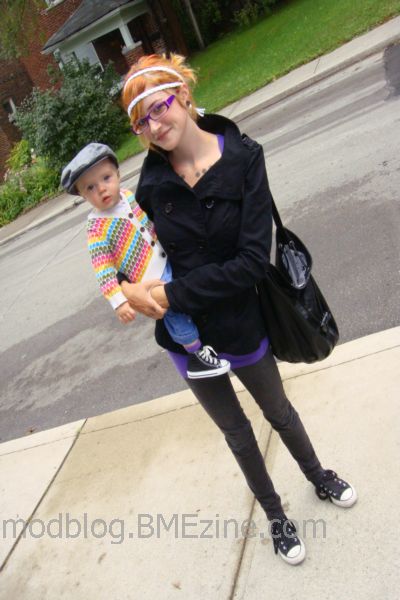 When in your own personal life did you start modifying your body?

I’m from a small town, I wasn’t even aware of modifications outside of the occasional eyebrow or lip ring until I was 17 and I moved to a larger town/small city and made a few friends there who worked at piercing/tattoo shops. I eventually had my lip pierced, and then a few months later switched that for two upper lip piercings (commonly called double monroes I guess). I got my first tattoo the same day, for an incredibly stupid reason. I was dating a young tattoo artist and we were bored. It’s a pretty horrid piece really, with a ton of scar tissue, but it was my first one so I remember it fondly. From there I just kind of ran with it. I realized that it was something I found esthetically pleasing on myself and others. I started stretching my ears, getting more tattoos, and reading up on different modifications through BMEzine actually.

How would you say that your own parents have influenced that decision?

My step-dad likes to tease me and say he got me into tattoos. This is a lie, he has a few silly little pieces (including Calvin and Hobbes and a chinese characters armband) and if anything, he should have shamed me away from them! My mom has never expressed an outright disgust or disapproval for my tattoos. Although when I got a memorial tattoo for my dad on the back of my neck, her response was “It’s a little big, isn’t it?”. She seems pretty used to it all now, and even compliments my pieces sometimes. But I can tell she’s still kind of worrying about the stigma attatched and me limiting myself in career choices. Thankfully, my family is pretty supportive and understanding and I’ve never been put in a position where I’ve had to choose between something I love and my family that I love.

Have your views changed since you became a parent.

I wouldn’t say that my views have changed, I still love tattoos and my earlobes and my piercings. I would never be embarassed by them just because I’m a mom, and I’m not going to regret them either. I do tend to notice more when people stare or make comments, just because I don’t want Audrey to ever be made uncomfortable. And it bothers me that somebody could make her feel this way someday over the way I look. Hopefully, we will raise her in a way that keeps her open-minded and comfortable with herself and her family, no matter what she’s like as she grows up. 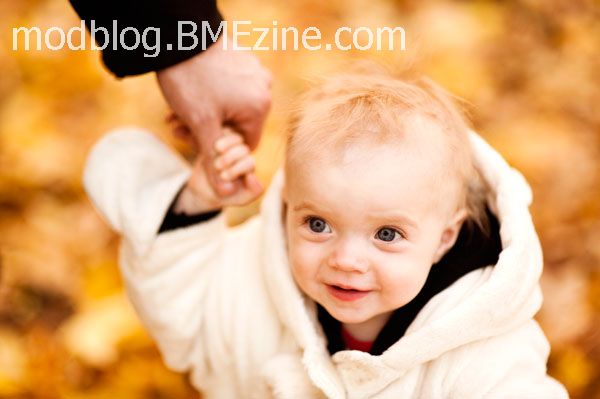 Out for a walk. Photo by princeclare.com

Tell me a little bit about your journey into parenthood

I hadn’t really planned on being a parent. I’ve always had the idea in the back of my mind, but I just never felt I’d be ready. I’d also been told by two seperate doctors that my chances of ever concieving were between 1 – 5%, for a variety of health reasons. So it was just kind of something that wasn’t going to happen for me. I actually didn’t find out I was pregnant until 3 months into the pregnancy when a female room mate mentioned that she’d gone to the clinic for a test of her own that had come back negative. She was explaining the symptoms she’d felt that she was sure meant she was pregnant, and each thing she mentioned I mentally ticked off as something that was happening to me. So I decided I should probably do a test just to be sure, and VOILA. Positive. It turns out my room mate had actually been having sympathy symptoms for me.

My partner, Zach, and I had only been dating for about three months at this point. We were very happy, and I was losing my apartment so he’d offered to share his place with me until I could find something else. It was literally the day I was moving into his house, while he was at work, that I found out I was pregnant so you can imagine the stress. I told him, and it took us about two weeks to come to a firm decision about keeping the baby.For awhile, it was very hard to get used to losing my chance at being a carefree, 20-something year old with a bunch of friends and a busy social/work life. Being a parent was the polar opposite. And a lot more difficult than anything I was used to. But it was also incredibly fulfilling and made me so proud and happy.

What are some of the challenges you face as a parent?

I’ve had issues, I’ve been stereotyped and ignored. But I arm myself with knowledge and force people to take me seriously. I’m not going to sit back and let other people make the decisions regarding my body and my daughter’s life. I’ve dealt with the stigma attached to someone with visible modifications. I’ve had other moms make snide comments towards me, doctors refuse to accept that I have educated myself on what is right for me and my daughter, and a general public that is convinced that I’m the stereotypical, trashy, un-wed mother. I’ve also had to face the fact that I am an incredibly impatient person, and babies require incredibly amounts of patience. I’ve had to try to change the way I react to different things, and find things to keep myself calm. I’ve also dealt with losing a lot of friends who are still young and living entirely different lives than I am. Pretty much the moment I could no longer go out and get drunk every night, I was ditched. I’ve made a ton of amazing friends though to make up for that, ones who are supportive, helpful, understanding, and always there for me and my family. 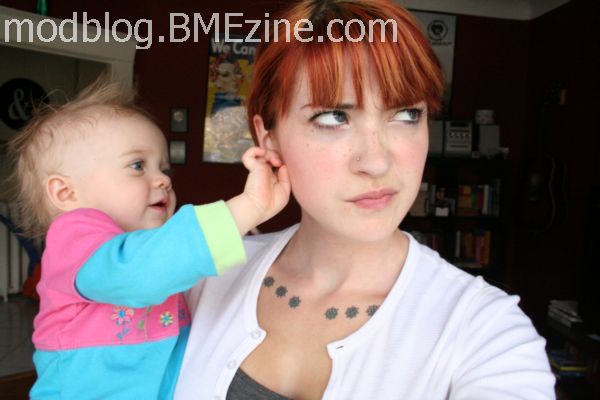 Are you employed at the moment? What are your plans professionally for the future?

I am currently employed, I work at a music venue/bar. Sadly we will be closing at the end of January so I’m looking for a similar job. In February, money permitting, I should be starting a Yoga teacher training program. Yoga has been a huge help, both physically and mentally, during my pregnancy and after so I’d love to pursuahae it as a career. I also hope to eventually get back to school, I’d love to do an English major in University and possibly be a teacher one day.

What sort of modifications do you have at the moment? Do you have any in plan for the future?

I have stretched earlobes, basic nostril piercings, and a fair amount of tattoos. A sleeve in the works, my knuckles done and some other scattered pieces. I plan on stretching my ears larger, it just depends on how cooperative they are. I also plan on being pretty covered in tattoos. I’ve got ideas for my chest, arms, legs, hands, neck, etc.

How would you say being a parent has impacted on your personal journey with modifying your body? Have you ever faced discrimination when spending money on your mods?

Being a parent has not swayed my decisions regarding my body and the things I like. I would never get a vulgar or inappropriate tattoo since I have a child, but that’s not something I would do anyways. I’ve never faced judgement over spending money on modifications, but we’re also fairly stable financially and Audrey is spoiled rotten by family. She doesn’t miss out on anything because of our spending. And we would never withold from her to give to ourselves. 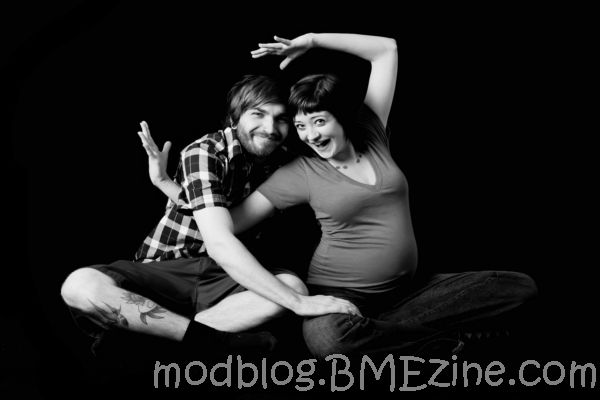 What message would you like to share with expecting moms or women who are thinking about having a baby?

Having a child is an amazing experience. It can be overwhelming, stressful, frustrating, heart breaking, and the most difficult thing you will ever go through. But it is also amazing, rewarding, and life-changing in a good way. You need to educate yourself as soon as you know you’re pregnant. Read information about pregnancy, about labour and child-birth, parenting and possible things you’ll have to deal with. This is the most important thing I think. I dealt with a lot of problems with doctors assuming I was just another young girl who got herself into a mess. But once I could show that I knew all about what was going on with my body, and what I was going to go through, I found I was listened to more and trusted to voice an opinion.