Editor’s Note: Once again it’s been way too long since we’ve heard from The Lizardman himself.
Let’s give Erik a big hearty modblog “Welcome Back”! 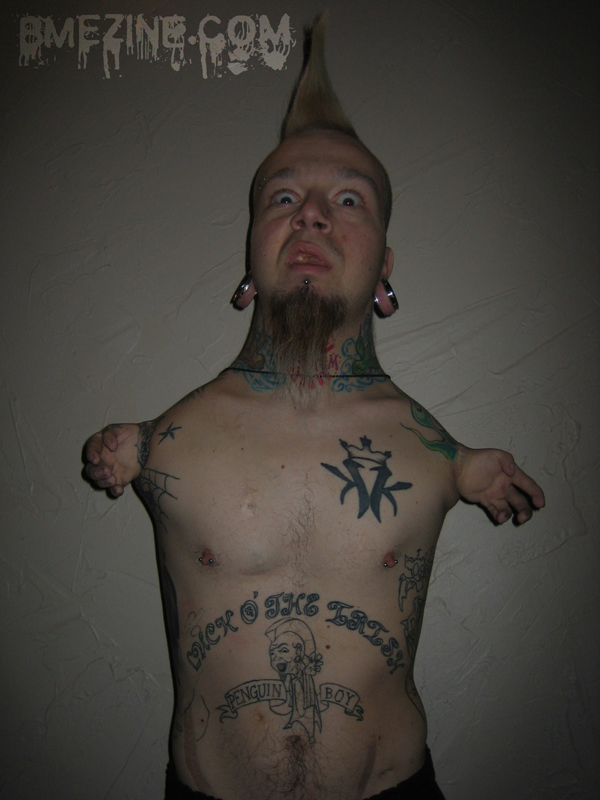 Time moves fast on the internet. It has only been a little over a week since the images of Penguin Boy’s first suspension hit modblog and created a stir but that entry is already more than a couple pages back from the main page. I have been living and working Penguin Boy as part of the Hellzapoppin Sideshow and managed to pin him down for a few questions and photos. Click through to read and see more of Penguin Boy.

Jason “Penguin Boy” Brott was born twenty-four years ago at Walter Reed hospital in Washington, DC. He currently lives in Glen Burnie, Maryland when not working on the road as a sideshow performer. He has two older brothers and an older sister. The condition behind his lack of arms and fused knees is a form of TAR Syndrome which he explains as “short limbs and low platelets”. The name Penguin Boy was chosen not only due to his hands (both left incidentally – one of only five people in the world with that manifestation) but also because he is the same height as the average Emperor Penguin; 3’3″ not counting his mohawk. When it comes to being stared at he has an interesting philosophy, ‘it’s like a hot chick – people are going to stare no matter what, so why not be a stripper and get paid for the stares.’ Of course, people tend to, at least initially, ask questions about how he is able to perform many ordinary tasks. I’m simply going to say that after spending time with Jason he is far more capable and self-sufficient than the majority of so-called ‘able-bodied’ people. I wish that everyone I ever had to share a tour bus with were as self-reliant as him. He can wipe his own ass just fine and he doesn’t have to worry about jerking off because your girl is usually backstage going down on him.

Long time readers of BME and IAM’ers may recall that Penguin was active on the site some time ago but as he put it “something happened with my account” and he never got around to getting it completely sorted out. The pictures that appeared on modblog not only showed his first suspension (a two point suicide pierced and rigged by Allen Falkner) but also revealed his already long term appreciation of body modification in the form of tattoos, piercings, and scarification. I asked him about what drew him into trying suspension and he told me;

“I have always liked body mods and it just felt like something I had to try I think I first discovered it [suspension] when I was 16 or 17 at the first tattoo shop I worked at – mystic piercing and tribal tattoo.” 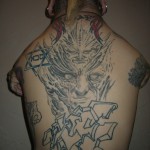 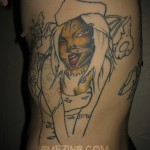 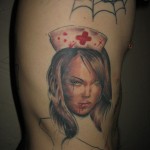 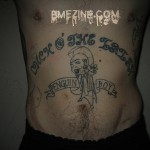 Penguin’s current modifications include: One and a half inch stretched ear lobes, two sixteen gauge horizontal surface piercings over the right eyebrow, eight gauge septum, fourteen gauge horizontal nipples, scarification on both wrists, and several tattoos including pieces around his throat and on either side of his head. Penguin doesn’t recall who did his piercings but the scarification was done by John Durante and his tattoos were done by various artists including; White Trash Matt, Mike Stephen at Mystic, Blake at Mystic, Halo at Positive Image, Buffalo Bill, Kylee, Mark Decker, and Aaron at Shiva’s. His future plans include a split tongue and expanding his tattoo collection over his body becoming ‘The Illustrated Penguin Boy’. He also looks forward to doing more suspensions. 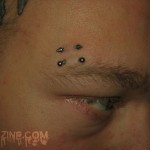 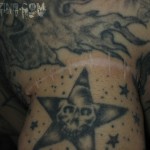 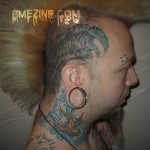 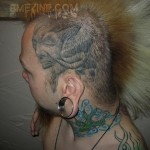 In terms of of sideshow, Penguin Boy is definitely on track to become one of the greats. As he puts it, ‘I’m going to be a triple threat – a born freak, a made freak, and a working act performer’. I asked him what he thought of the word ‘freak’ and this was his response:

“The word freak to me is really when a chick wants to give you a golden shower [laughing] but really everyone is a freak in their own way.”

Penguin got into the sideshow when he was spotted by Bryce ‘the govna’ Graves at Ozzfest. Bryce was managing the Bros Grim Sideshow at the time but has recently created his own show, Hellzapoppin ( http://www.hellzapoppin.com ) that features Penguin Boy doing his versions of the blockhead, pierced lifting, and more. Penguin was at Ozzfest hanging out with friends after having worked “hyping for Wolfpac and sometimes Kottonmouth Kings”. He has his own music project; lowercasej – in addition to working in sideshow. Penguin says that his family is all right with his working in a sideshow but that it did take them a little time to make the adjustment. Fans should check out http://myspace.com/jasonbrott for even more.