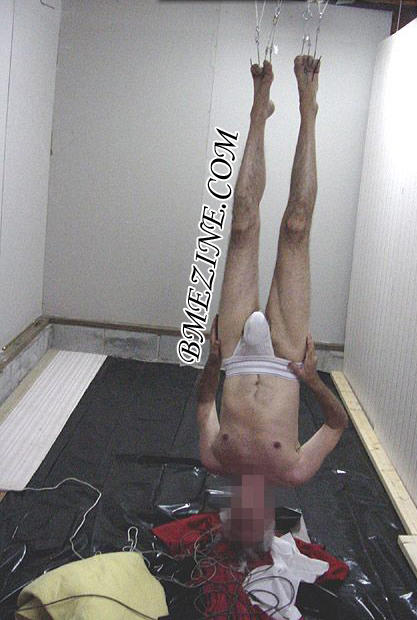 I first met D (full name withheld and face blurred to protect his privacy) about a year before this foot crucifixion suspension was done. He decided he wanted to suspend shortly after seeing Allen Falkner perform a two point chest suspension on one of his many television appearances. D decided this was something he NEEDED to attempt himself. At the time he was already a senior citizen and he was not a big internet user. The reason I mention this is because having only briefly seen a suspension on tv, he did not fully understand the techniques we commonly use. Instead, he devised his own system based on good old fashioned creativity.

He took two 8″ carbon steel rods (approximately 4 gauge in size) and sharpened one end of each. He used these rods both as the needle and the hook for his suspension. He pierced himself about 3″ deep on each side and then made a rig consisting of small rings which went over the ends of the rods and were connected together with a length of rope. When the rope was pulled tight, these rings became taught and did a fine job of holding the rods in place. To get up, he used the most logical means he could, he stepped off a chair, just the same way someone attempting to hang themselves would. After a good long while he reached up with his arms (which is quite the feat in itself from this sort of suspension) and cut himself down.

Shortly thereafter he got online and found BME. He decided he wanted to attempt a suicide suspension, but realized this was not something he could facilitate himself. He wrote into BME and Shannon referred him to me. When he came to me for the suspension he brought the carbon steel rods and his “rig”. I, of course, opted for the community standard mustad hooks and proper suspension rigging so I could put him up using the most modern techniques and standards of the time.

Some time later he got his first and only piercing, a 4 gauge PA. He also did a few more basic suspensions before coming to me and telling me he had attempted a foot suspension (what is now known as a foot crucifixion suspension, a name I dubbed to describe the fact the hooks went through the foot) but failed to get up.  He wanted me to facilitate the next attempt for him. I refused because I did not want to be responsible if something went wrong in a suspension I considered very dangerous for anyone, much less someone of his age.

Some time passed and D contacted me again. He told me flat out he was doing it and would like my help. I once again explained my objections and told him I, as a responsible body piercer and member of the suspension community, couldn’t participate in this. Finally, he asked if I would come by to record the suspension and to call for help in the event that things went bad. I thought about it a bit and as opposed as I was to the idea of the suspension attempt, I felt it would be a huge disservice to D as well as to the suspension community to not have this suspension documented. So I agreed to go and play the role of journalist. I told him I was going to be totally hands off, but I would record the event and be there to help if things did not go his way. 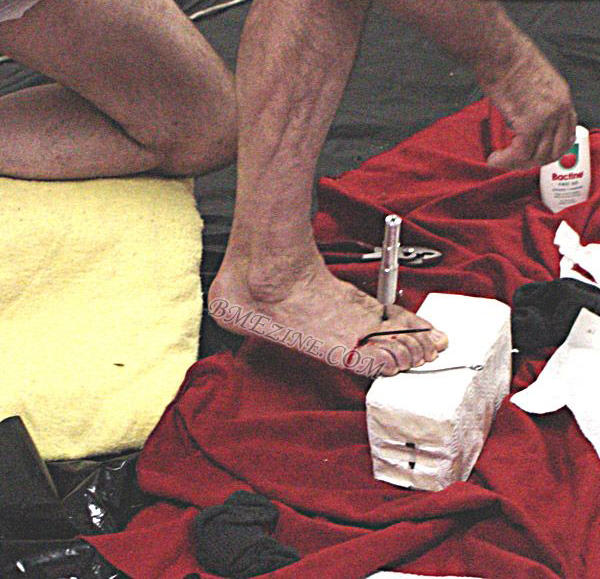 As I mentioned earlier, D was extremely creative with his methods, they were quite crude but also quite clever. He had taken an ice pick and ground the end down to fit inside of the needle, he used this as a needle pusher. On the hooks, which were the mustads I used on him for his suicide suspension, he ground down the ends to make them fit into the needle. If you are familiar with step down external threading or pin tapers, his hooks and needle pusher both worked in a similar fashion to those. He also used a stack of gauze as a stopper for the needle to go into, that combined with his makeshift needle pusher made the fact he was piercing through tough tissue on himself a doable task. This system made piercing and follow through with the hooks as smooth as possible. Like I said, crude but clever. 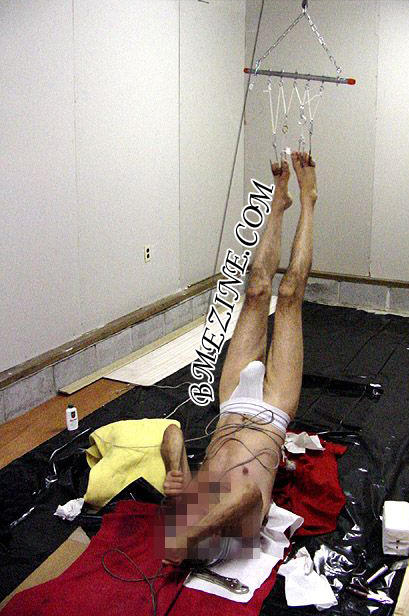 After the piercing process, he took a moment to gather himself and walked, well more like waddled, on to where he had the pulley set up. He laid down and rigged himself up, while I set up the camcorder and camera. He took a breath and in one continuous motion pulled himself up. With that he had achieved something that, to the best of my knowledge, no one before him nor no one after him had achieved, a true “crucifixion” style suspension. I saw him a few months later and his feet had healed with hardly any scarring. He said “walking was difficult for about a week, but after that everything went back to normal”.

He kept this, as well as his other suspension and piercings hidden from everyone in his life except me and I feel very fortunate to have had a small part in this momentous suspension. It is awe-inspiring to meet someone like D, someone who finds something they NEED to do, purely for themselves and then does it against all odds. I consider D’s story  the “Worlds Fastest Indian” for the modified community, and I hope it continues to inspire people to challenge what is deemed “impossible”. While I can’t recommend anyone attempt to recreate this suspension themselves, I also can’t help but respect D for pursuing his dream and doing “the impossible”.

Want to see more pictures from this suspension? Those pictures and countless other groundbreaking, historic pictures are just a BME membership away.