OK, let me start with a pretty picture of Lenorefff so the entry has some meat to it… But what I really wanted to talk about briefly was a couple of the criticisms that have been brought up about BMEgirls, so there’s no confusion or hard feelings about what I post and why (or if there are hard feelings, at least they’re on target). 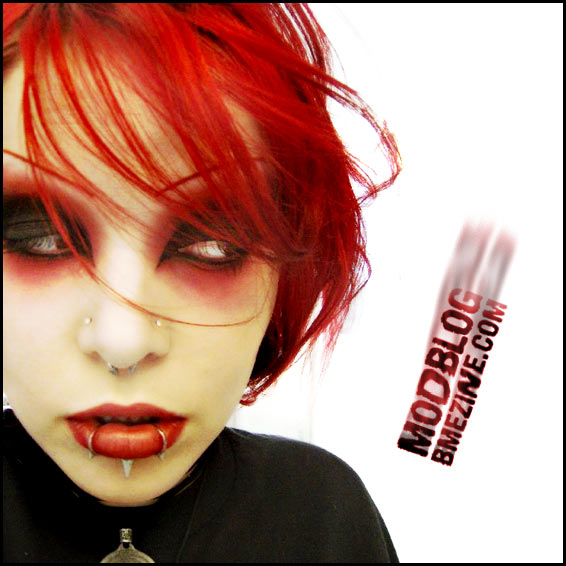 She only has a star tattoo and you’ve posted these before
Sometimes people get upset because I post a photo where the person has a “generic” tattoo, and appear to only be posting it because the photo is alluring. First of all, there’s nothing wrong with a “generic” tattoo — things get popular or common because most people agree that they’re pleasing. Second, the fact is that if you look at the presentation of the photo and the presentation, the alluring context is perfectly relevant and it’s not unreasonable to present it in that context. Finally, the truth is that some people do read ModBlog because they want to see sexy people with mods, including minor mods. Some people want to pose for those photos, and I’m OK with that.

The modification isn’t the focus of the shot — the sex is!
BME does an excellent job of documenting the nitty-gritty of modifications with plenty of closeup photos. ModBlog is more lifestyle oriented and my goal is to place the modifications in the context of the person and how they are presented, rather than just focusing on exclusively the modification. I try and include links and information so you can investigate the mod more if you’d like.

You doctored the photo! You’re encouraging an impossible body image.
All photos that are posted on ModBlog are color and level corrected. Photos that are posted to BMEgirls and BMEboys are sometimes retouched as well. I see these sections as a glamor magazine of sorts and I try and present the photos in the same light, so people and their modifications look their best. I try not to push it past what the eye would capture in an ideal moment.

Why don’t you post a wider range of body types?
Well, I’m sure there’s truth that because the images pass through a double filter of both Phil, then I, that there’s going to be some subconscious manipulation that leans toward our own particular likes. However, we do our best to post an accurate demographic representation of BME’s readership (or should I say submittorship) — if you think we’re not posting enough of a certain subject, submit it and encourage others to as well!

Why all the sexualization? You’re sending the message that people have to take their clothes off to be accepted.
This is the only point that I’m concerned about. I want to really emphasize to people reading this that I love seeing your scantily clad photos, and so do others, because sexuality and body modification go hand in hand for a ton of folks, but you should never take or submit stuff like that (in my opinion) if it doesn’t turn you on as well. If it turns you on, go for it… the best kind of art, especially erotic art, is the honest kind. Just do or be what you enjoy and take a picture. But take the picture of you, not of what you imagine others want…