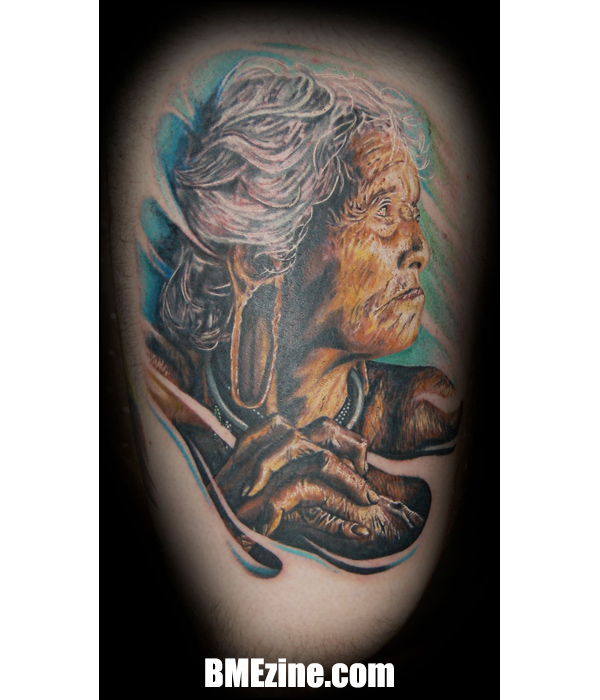 David writes in about his tattoo:

Several months ago, my beautiful friend Aly sent me this image via E-mail and followed up with several text messages demanding I check my E-mail right away. I did and was totally blown away by the image that was there—a photograph of this woman (that several people claim to believe was involved with Tawapa) sitting in front of me. I knew seconds later that she was going to be be tattooed on me. I went back to Daniel Jones (of Asylum Studios in Salem, Virginia) who had done another beautiful color portrait of another indigenous person and asked him to do it. He studied the image for about a month and we scheduled the tattoo for opening day of the 15th annual Greensboro (Little John), North Carolina, tattoo convention. Daniel felt challenged and nervous but confident. His focus and dedication to this tattoo were unmatched by anything I’d seen him do and it ended up winning him first-place color tattoo of the day! This whole experience has been awesome fore me and Daniel alike. Thanks got out to Aly, Daniel, the photographer who took the original picture and everyone at the Little John tattoo convention.

It’s excellent work, but this is certainly reminiscent of this post—another instance where the quality of the work was widely praised, but some readers felt uncomfortable with the idea of getting tattooed with a “random face,” for lack of a better term. On the other hand, though, is this all that different from getting a tattoo of a piece of (non-face) art with which you feel a deep connection?