When we first tattooed our eyes in 2007, I don’t think any of us ever thought it would explode like it did. It makes me both very happy — and terrifies me a little bit — that it has exploded like it has. Many body modification artists all over the world are now offering this service, to say nothing of nutcases in prison tattooing their own eyeballs with smuggled-in supplies. All the anecdotal evidence and experience as well as the limited medical information on the subject suggests that this is a safe body modification — assuming that nothing goes catastrophically wrong during the procedure, which I’m sure will eventually happen when some scratcher fool decides they can do it and messes up. However, that doesn’t mean that it’s safe long term since the evidence just isn’t extensive enough yet — the oldest full eye tattoos are only five years old. The eye is capable of handling calcium deposits in those layers (which is why Rachel’s doctor was willing to do the platinum implant in her eye a few years before eyeball tattooing started), but that’s a small amount of “pollution” in comparison to the serious amount of ink that some people are having injected. To say nothing of the glycerine and other ingredients in tattoo ink that may well be quite foolhardy to inject into an eye — after all, it’s not as if tattoo ink is an inert solid powder pigment in a sterile saline solution. And then of course there’s “regret” — I would argue that an eyeball tattoo may well push social alienation way farther than any facial tattoo could, and while you may think that’s a good thing, it can’t be removed. And even if you have no regrets, it doesn’t mean the people around you won’t feel differently — don’t underestimate the impact this could have on your partner for example, who may not like lovingly gazing into a set of eyes different than the ones they fell in love with. 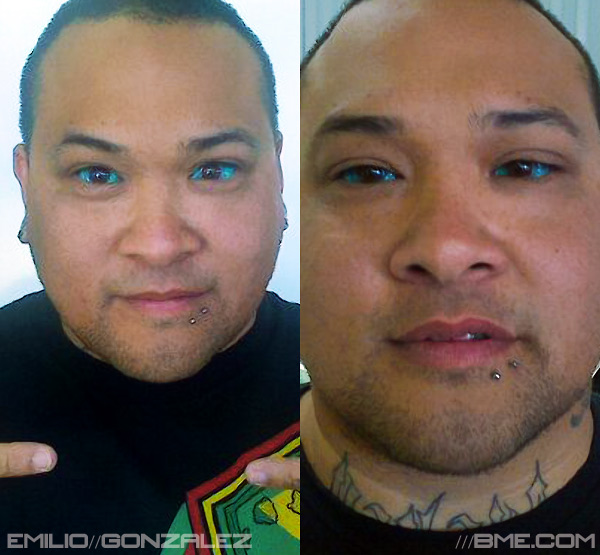 Anyway, even though I am and probably always will be one of eyeball tattooing’s biggest cheerleaders — to say nothing of being one of the “patient zero” guinea pigs — I really truly hope that people will treat this mod with caution and restraint. All that said, it makes me so happy to see these super-cool blue eyeballs that Venezuelan bodmod superstar Emilio Gonzalez (who now also has a shop in California, and will also be at the Costa Rica convention in September) did while guesting at Sin City in Hawaii recently.

Finally, I’d like to address the rumor that’s being spread lately that by tattooing the white of your eye you damage your vision, under the theory that the white is somehow “neccessary” for resolving colour — I don’t know what the reasoning is, because it’s complete bullshit, but maybe someone has it in their head that the white of the eye is some sort of “white balance” creator like in a camera. Other people have said it has to do with reflected light. Either way… NO. It makes no difference. If it did, your eye would not have a colored pupil. If it did, animals, which often show very little or no white eye, would have worse vision, when in fact, they often have better. I’ve even seen people claim that doctors backed them up, or medical journals back them up. While I have no doubt that there are doctors who will go on record saying this is a bad idea, when I got my eye done I spent a great many hours being examined by eye experts — including the eye doctor who invented the ocular ultrasound technology that is the industry standard in imaging the inside of eyes. He used this on me, and gave my eye — which I should add has a terrible cyst of ink and is a “worst case scenario” a clean bill of health. Rachel’s doctor, who invented eyeball implants, also invented much of the modern laser eye surgery. I have additionally had my eyes examined by a several senior ocular surgeons when I was considering LASIK and they all gave my eye a clean bill of health and believed there was no inherent risk in the procedure short of damaging the eye during the procedure. In addition, what limited medical literature there is on eyeball tattooing (it has been done historically, as I mentioned, and is still done on eyes with iris deformities) shows that it is quite safe and carries a lower rate of complications than normal dermal tattooing. So please, while I want people to be cautious, I also don’t want to see pointless fear-mongering. By telling lies about safety and claiming that your lies have medical backing, you distract from honest debate about the risks, and make yourself look like an ignorant jackass in the process.

9 thoughts on “Just Look At Those Baby Blues”