It’s not unusual for some people to get a slight “halo” of color around their tattoos, as the ink moves out via capilliary action and permeates and stains subcutateous tissue. Sometimes this is because of a mistake make by the artist (for example, tattooing too deep), but because anatomy is so variable from person to person, even the best artists have it happen at times. Typically this halo extends not much more than 1/4″ and is subtle enough that most people won’t even notice it, but a friend just sent me this example which is one of the most extreme examples of tattoo ink bleeding out into surrounding tissue that I’ve seen to date.

In the pictures below, the left one (which also shows a rash that developed after the tattoo, which may or may not be related — I suspect not — and was treated successfully with Sibicort, a Chlorhexidine/Hydrocortisone cream) is two weeks after the tattoo was done, and the right one was taken four months afterward, showing what looks almost like a bruise all the way around the arm. Over a year and a half later and the discoloration still looks the same. The woman with the tattoo has very light, thin skin which is generally sensitive and prone to allergic responses. The ink that was used is the same ink the tattooist normally uses and hasn’t caused problems for other clients as far as anyone knows.

These pictures shows the extremes to which ink is capable of spreading. It should be noted that because of the likely depth and diffuse nature of the discolouration, it is unlikely that this can be treated short of simply tattooing over all affected skin. If any professionals have comments or feedback on this — theories on what caused it or how to minimize it, or whether this is just an unavoidable risk in a certain percentage of clients — I’d love to hear it. 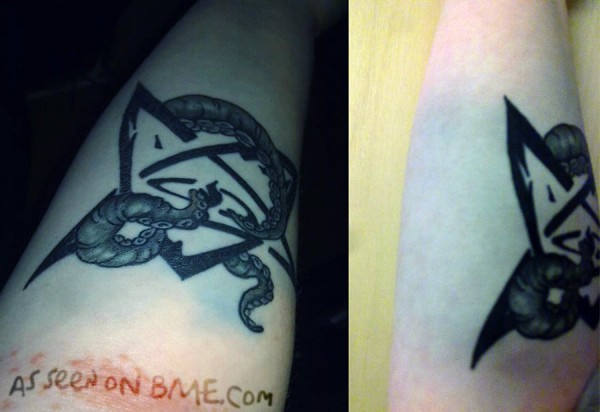