Mary Jo just had Brazil’s Rafael Leão Dias finish her other eye, injecting both of them with red… It’s an interesting color, because unlike tattooing your eyes black or green or just about any other color, no one is ever going to look at you and think you tattooed your eyes — in some ways it reminds me of the guy that got hyper-realistic road-rash tattooed on his face (one of the craziest things I’ve ever seen by the way) because she will forever be freaking out people on a whole different level than everyone else with tattooed eyeballs! I’m sure it’s both very fun and very tiresome dealing with the questions.

Red is perhaps the most volatile color of tattoo ink, so I’ll be keeping watch on how her eyes progress. One important thing to understand as well is that the majority of tattoo pigments — red especially — are not completely long-term stable in the body, so even when they appear safe in the short term, as they break down over time significant problems can occur since there’s no way to remove either the ink or any chemical compounds it breaks down into. If you get your eyes tattooed in your teens, that ink has to stay there for a long, long time still. I do think it looks stunning, but it’s not a gamble I’m comfortable with personally. Of course, it’s not as if my blue ink is considered safe for use in eyes according to the MSDS data either so my worry is a little hypocritical! 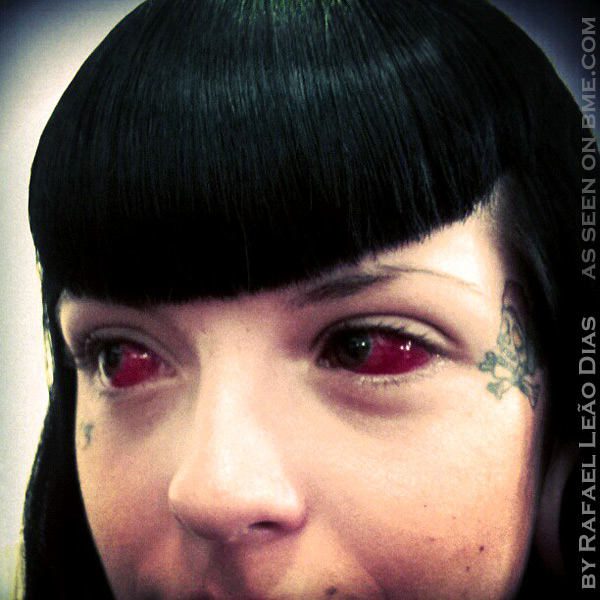 When tattooing with red ink, especially in the eye, it’s extremely important to be aware of what’s in the ink, because there are a variety of compounds that can create a red ink — iron oxide (rust basically), naphthol (arguably the safest option), pyrazolone (an organic compound), cadmium red (a toxic compound common to paint), and cinnabar (which is mercury based, and also toxic). Unfortunately sometimes because the more toxic compounds give a stronger color and sometimes because they’re cheaper, it’s not uncommon to find them in tattoo inks, although it’s becoming more rare. If you want to do some research for yourself, most higher quality red inks are a mix of Pigment Red 210 C.I.# 12477 (naphthol), Pigment Yellow 65 C.I. #11740 (2-[(4-methoxy-2-nitrophenyl)azo]-N-(2-methoxyphenyl)-3-oxo-Butanamide), Pigment Orange 13 C.I. #21110 (pyrazolone), and Titanium Oxide C.I. #77891, depending on the specific tone — as well as glycerine, witch hazel, various alcohols or even just listerine, various acrylic resins, and water. None of these compounds (with the exception of water) are considered safe in the eye — although they are generally stable compounds. The only ink which has been validated as truly “safe” in the eye is — and this may come as a surprise — classic India Ink.

And see also the Eyeball Tattoo FAQ of course.