I really dig how well Mirka X Mythra‘s piercings are paired up! I’ve always liked projects where an untrained eye might not know where one piece of jewelry begins and another ends. Everything gets pulled off really well without seeming cluttered. 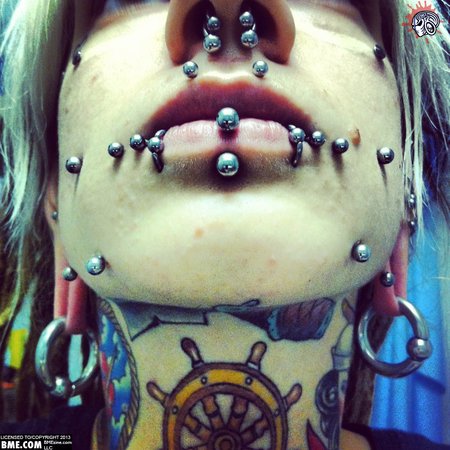 As a “devout atheist” and ardent science-minded skeptic, I don’t buy into the spiritual concept of energy. I do however strongly subscribe to the verifiable fact that ritual has a profound psychosomatic effect, so whether or not there is a metaphysical truth to spiritual theories, utilizing them can still add a great deal of value to someone’s life, especially in the context of ritual-friendly activities like body modification. That said, I read with great interest Patrick Hüttlinger‘s work developing a line of hand-carved wood-chassis rotary tattoo machines based on sacred geometry and theories of spiritual energy vibration — how do you literally encode Om into a tattoo tool and by extension the art it creates?

Zoom in the second picture for detail view

I asked Patrick the obvious question — how do you sterilize or disinfect a tattoo machine that is constructed in part out of porous organic materials — especially when we’re talking about the tube enclosure, which can’t easily be bagged and will almost certainly come in contact with biohazardous fluids? He explained that all the wood was treated with laquer and it shouldn’t absorb any more liquid than metal (which is to say, none), and the motor cover is epoxy resin. While the pieces can’t be autoclaved, standard hard surface chemical disinfectants are appropriate.

Finally, I can’t really write an entry about Patrick Hüttlinger without showing you some of the amazing tattoos he’s created — and I think these tattoos give some great context to the creative energy that went into creating the beautiful tattoo machines. I especially like the pieces where he mixes geometry and dotwork with traditional tattoo styles.

Find Patrick and these machines at sakrosankt.com by the way.

I’m quite fascinated by the experimental ultra-wide needles that experimental art tattooists Cy Wilson and Caro (see the blog skintraces.blogspot.ca for an engrossing view into their avant garde world of ink). Check out these monstrosities:

If you’re wondering what sort of strange art you might create with such a contraption, here are three guniea pigs they’ve experimented on with them, using them to do strange calligraphic brushstrokes that would be almost impossible with a traditional tattoo tool — the only other thing that could easily create such a pattern are some of the hammer-like hand-tattoo chisels that some polynesian tatu masters use. In the past people have experimented with similar needles to speed up black filling, but here they’re being used more creatively. Click to zoom in on these images:

Again, do check out skintraces.blogspot.ca — whether you love it or hate it, it’s a fascinating look at the borders of the tattoo artform, where it intersects with modern art.

I figured, since I have often times posted wanted ads on here for others, it is only fair  I do so once for myself.

My shop, Comes A Time Tattoo, in Fairfax, VA (20 minutes outside of DC) is looking for one talented tattoo artist to join our crew.  While, I myself do not own the shop, I will be handling the hiring process.

First off, what we are looking for. We want an experienced talented artist with a portfolio to back it up. If you are not already licensed to tattoo in the state of VA, we would expect you to meet the requirements, and be willing to take the steps necessary to become licensed. We are an easy going, laid back shop and expect someone of the same mindset. Ego’s and drama are two things that will absolutely not be tolerated. Even though we are laid back, we expect any employee to take their job seriously. We need someone willing to work a set schedule and to be here from open to close  on those days.

What we have to offer. Whoever we hire will get to work in an extremely nice shop, in a busy (and very affluent) area. Our first time clients almost always compliment our shops decor and lay out. They will have a nice private locked room, with their own sink.

For pictures of the shop, please check out our website. If interested in the position, please email me via the link below this article with my picture that says “email this author” (you have to click through for the link).

This past weekend, I went to the 18th Annual Tattoo Arts Festival in Richmond Virginia, just as I have most every November for the past decade. Out of all the conventions within a few hours from me, this one has always been my favorite. This was the show where I first witnessed true legends of the tattoo world work, where I first had my photos taken for a magazine and where I first met Shawn Porter many moons ago. Not to mention the parties, dear Jeebus, the parties. I have been to a lot of other conventions and a ton of other parties, but never have the two been combined together in such delightful excess as they are every year at the winter Richmond show.

A few days after returning home, kicking the hangover and returning to work I hear the sad news……….. Billy Eason, the man behind this convention for the last 18 years, as well as many other conventions, has passed on.

Billy was an old school American badass, one of the last of a dying breed.

He left his mark all over Richmond’s tattoo scene by his opening of Red Dragon and Capital Tattoo. He left a much larger mark still on the international tattoo convention scene, not only by the conventions he threw, but by the precedents they set.  He raised the bar for what was to be expected from a tattoo convention and he became a legend because of that.

So whether you knew Billy, knew of Billy or are just learning who he is take a moment to pay respects to one of the men who helped define the tattoo conventions which are now more popular than ever.

Also, feel free to check out SoTattooed.com and our friends and NeedlesandSins.com who also  paid tributes to Billy.

The Funeral Services for Billy will be held on Sunday, November 28 at the Holiday Inn Koger Center (the hotel that host his conventions) from 12-4 pm.

Happy New Year to everyone! I was checking out Juxtapoz.com and noticed that Bob Roberts was nominated for inclusion in the top 100 moments of 2009.

Voting is still in progress but I wanted to ask Modblog readers to help vote up an icon in our community because he deserves the recognition for all that he has done and continues to do for the tattooing community.

100. Bob Roberts: Alive at Canvas LA, Los Angeles
This may have been the first show we went to this year where a jaw-dropped. Haven’t never seen a Bob Roberts’ piece of the size that were on display at Canvas LA, these pieces were like keys to an entire generation of artists who followed the man.