At the start of October I posted about an ear pointing that Samppa Von Cyborg (voncyb.org) had done and included some fresh photos. I’m thrilled today to be able the healed result today, and it’s truly incredible. It’s not just an ear that’s been folded into a point at the top. It’s an ear that’s been completely rebuilt to give the illusion of having grown naturally into this form. 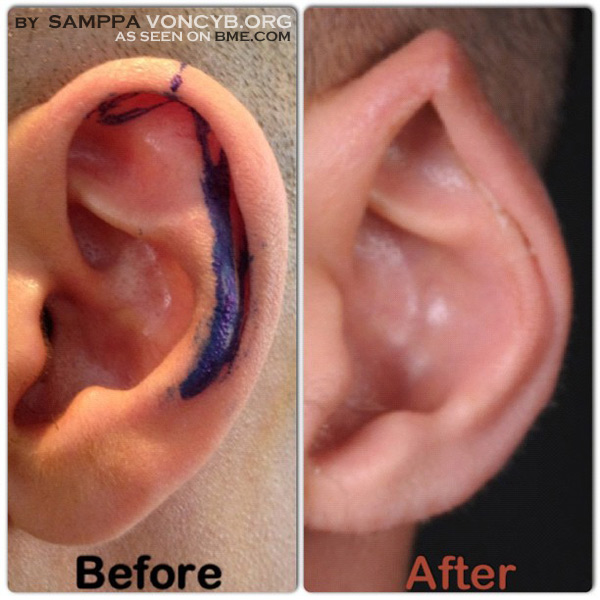 You may recall the ear pointing trainwreck posted about a month ago. It’s important to understand that the more complicated the procedure gets, the higher the risk of failure, both in terms of full-on failure, and aesthetic mistakes. This is very much the case with advanced ear pointing like this. I’ve been sitting on these pictures for a while, because I don’t have explicit permission to post them, so I’m cropping them more than I want to in order to hide the person’s identity (and really pointing fingers is not my goal), but they show an attempt to do this procedure leaving a customer with an ear that to me looks like the sort of thing a caveman might have after battling a sabretooth tiger. It’s definitely not as gnarly as some procedures-gone-wrong, but it falls far short of what a person should expect — for starters, in addition to the technical aspects of the procedure looking amateur, the aesthetics and angles are nonsensical, and the two ears don’t come close to matching.

I really want to urge clients to only go to people for work that they can show you multiple healed examples of in their portfolio. And practitioners, there is absolutely no excuse in today’s world for blindly copying procedures you’ve seen more experienced artists post online. Training is available. Take advantage of it. Take it slow. It’s better to be responsible practitioner than to be something akin to a jackass in a comment forum yelling “first”. You don’t want the weight of needlessly messing people up on your conscience. Just remember you’re playing with people’s lives. Do it for them, not for your ego.