There’s an oft-retold story about the early day of Star Trek that Samppa got me thinking about (as has watching four or five Star Trek movies in the last couple days as I’ve been feeling especially ill). When Leonard Nimoy played Spock on the original Star Trek he had to come an hour earlier than everyone else and stay later as well to get his pointy prosthetic ears applied. To make matters worse, he had extremely sensitive skin, so this process was quite painful — to say nothing of his ears looking quite different from period to period as different makeup artists created them. Producer Robert H. Justman actually suggested to him that he get plastic surgery to create the ears permanently (and revert them in the future if needed), and Nimoy actually jumped at the opportunity, only to find out that Justman was pulling his leg and the procedure was not possible at the time.

We’re still some way from really being able to create a true lengthened Vulcan ear (since all of those procedures are “subtractive” in nature, unlike prosthetics, which are fundamentally “additive”), I was thinking that Samppa Von Cyborg’s (voncyb.org) current style of ear rebuilding is the first procedure that could actually almost do what they were talking about. Unlike the first generation of ear pointing, done by folding the corner of the ear into a point, Samppa’s procedure fully reshapes the ear rather than trying to squeeze it into a new form and hoping it adapts. While some last beautifully longterm, with first generation ear pointing, it’s not unusual for the ear to open up over time (not into a wound, but stretching the “point” into more of a flat curve), to slowly lose their point as the ear’s elasticity forces its way back to its original form. But because Samppa’s procedure relieves that pressure with much more radical re-sectioning of the tissue, the procedure is far more predictable and stable. That said, it’s unlikely that it could be reversed — at least not in a way that restored the same ear that was started with.

Here is the latest very impressive ear that Samppa has done. 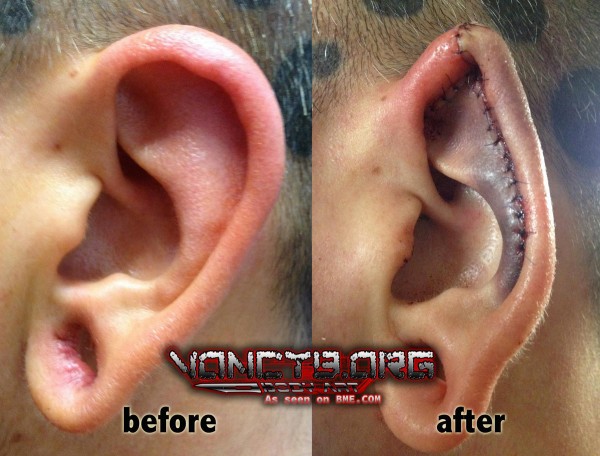 One thought on “Getting closer and closer to Vulcan ears”