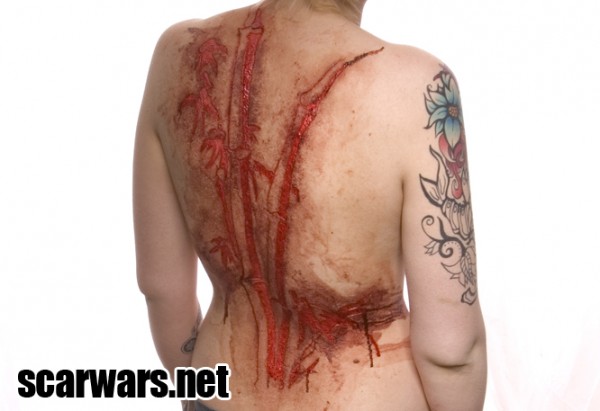 I recently shared the story of how the ModCon events came to be with the promise to chronicle the other events in time. That’s still on my to-do list, but today we’re going to talk a little about the ScarWars events; how they started and their connection to ModCon.

ScarWars One happened in May of 2005 in Philadelphia, PA with seven of the world’s leading scarification artists working and attending, but it’s roots go back to 2004 at the ModCon4 event in Toronto, Ontario where a guest named Chris and his then wife Danielle asked about doing a collaborative cutting/branding piece with all of the attending artists using different techniques to make a wholly unique scar. Brands, cutting and flesh removal all on the same client. At the time it was unheard of, and as I watched Blair, Ryan, Danielle and I believe Brian work on it, I realized that we had reached uncharted territory.

END_OF_DOCUMENT_TOKEN_TO_BE_REPLACED 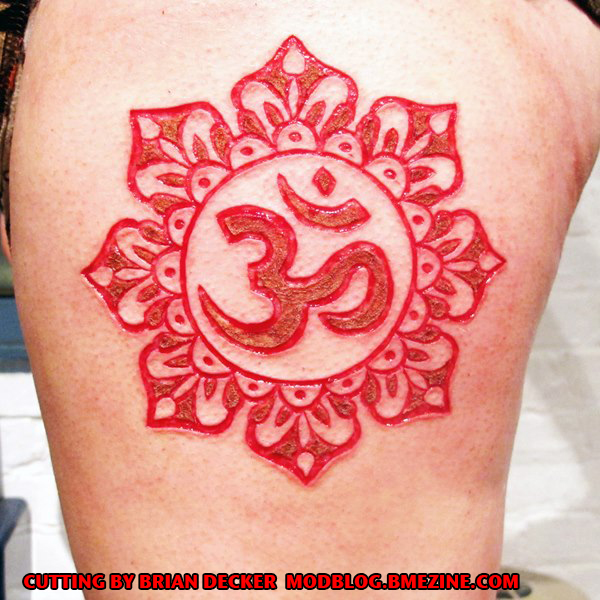 One of the artists who attended all three Scarwars events was NYC’s multi-talented Brian Decker of Pure Body Arts, who did this amazing cut/cautery hybrid scarification.

Since thighs don’t typically scar that well, I made sure to keep the main parts bold, and am hoping the burning will do more damage to the tissue than superficial removal. We’ll see…..

It’s super important to go into a cutting/branding piece knowing that the results can be unpredictable, with technique, healing method, genetics and just plain luck factored in. Some folks may want the reassurance of knowing exactly how a modification will heal, but as Mr. Decker says: “We’ll see.”
END_OF_DOCUMENT_TOKEN_TO_BE_REPLACED

The beauty of scarification is that the end result can never be fully predicted.  Sure you can get an idea of what a scar is going to look like if you have scars already, but even then there are so many variables that can affect healing.  Sometimes you’ll get a scar that is perfectly defined and with the colouration you were hoping for.  Other times your body just says, “hey, this is how I’m going to heal this scar, deal with it”.  The reason I’m bringing this up is based off of IAM:Polareyez‘ comment on the latest photo of her snail scar.  To give you a bit of backstory, the scar (which is actually a combination cutting/branding by Brian Decker), started out as all scars do, as an open wound.

A few months later, it was well into the healing process and was turning a pale pink colour.

And now here we are today, 10 months since the initial cutting and as you can see, it’s lightened up even more.

You may need to move your monitor around to see it, but it’s there.  What’s worth noting is that even though this isn’t the exact colouration that Polareyez was going for, the details Brian put into the scar are still well defined.  I’d even go so far to say that it’s looking a lot better than it did several months ago, if only for the consistent colour.  Fans of pale scars will certainly appreciate this scar.  As I mentioned earlier, scarification isn’t something that can be predicted with 100% accuracy, but that shouldn’t discourage you from committing to a scar if that’s the modification you’re looking to get.  You never know, you may end up with something that surpasses your expectations.

Shannon posted a beautiful scar by Brian earlier today, so I thought it’d be a good time to show off this set of implants that he did.  Normally we see collarbone implants put in horizontally, so this vertical pattern is a nice change.  It also makes his chest appear to be more angular, as your eye fills in the spaces between the lines.

Brian Decker (purebodyarts.com) who did this scarification, admits that he didn’t know what a Leafy Sea Dragon was before doing the cutting, so I think I’ll use this as an excuse to tell you because it’s really a remarkable creature. It’s very much like a sea horse, which is a type of sea horse that hides with it’s extreme anatomical camouflage, drifting peacefully among plants that it looks very much like. It moves using two tiny and almost transparent fins, one on its neck and one near the tail, with the rest waving in the breeze as if they were vegetation. To survive it sucks up tiny shrimp, plankton, and larval fish through its anteater-like snout. It’s flamboyant yet serene body makes it a perfect image to capture in body art. I got to see them in person at the Monterrey Bay Aquarium when Barry of Anatometal took us, if memory serves, and they’re quite wonderful.

Above the scar by Brian, and below, the amazing lifeform it mimics.

At this point in my life there are not too many “extreme body mods” that I actively consider getting. For instance, scarification doesn’t hold up well on me, transdermals had to be cut out of my head and eyeball tattooing simply freaks me the hell out. However, the one “extreme mod” I still could see myself getting is a new subdermal implant. I LOVE the little ear flat implants for instance. I am also planning on swapping out my old school titanium circular barbell implant in my hand for a newfangled silicone one of identical shape and size. My left had used to have a Titanium cbr until months later I caught a bad case of cellulitis in the hand, freaked out and cut that bastard out! Had I known then, what I know now I would have just taken some cephlex and bada bing, it would have been better. Anyhow, I am currently lasering off the tattoo on the hand and that has me thinking I’d like to do a detailed silicone implant on that hand then tattoo over it.

This lotus implant. done by the only man I’d trust to do such a thing on me personally, XPureX, has been under the skin for two years and looks absolutely awesome! It definitely has gotten my creative juices flowing and it has helped to respark my interest in getting a new one myself!

It took me a few minutes, but I’m pretty sure the writing on the inside of that hand-heart says “Sacred”.  Oh, and the scar, that’s by the birthday boy, Brian Decker.

Since today is Brian Decker‘s birthday, and he’s one of the biggest contributors to The Friday Follow-up, this week’s post is just for him.

So from all of us here at BME… Happy Birthday Brian!

Oh and what the heck, here’s one of the scars he did back in November.  Hopefully it’ll remind him to send in more healed photos.

Why a massive 7 hour scar and ink rubbing by Brian Decker and Christiane from Pinpoint in Oslo, Norway.

Brian and Christiane did this at Brian’s studio, PURE in Brooklyn.

We’re all the same.