The mainstream media just loves saline injection in the forehead, and because it’s so weird and rare — and most of all, photogenic — they just love printing it. It gives them permission to print human oddity freakshow photos without feeling exploitative. They don’t get to see it often, and thus every time they see it, they ignorantly and hilariously insist on calling it “the latest trend” — often “the latest Japanese trend” to be specific — and thanks to last night’s episode of National Geographic’s fun but clueless “Taboo” series, it’s all over the media, with sites like Jezebel running headlines about “Bagel Heads“. Here’s a screen cap from the show.

This story is so silly, and really, is ancient news. The short version of the history of “bagel heads” is that Montreal photographer Jerome Abramovitch (chapter9photography.com) created the concept for performance art and photographic purposes (and a little amusement), presumably after seeing fetish-scene saline inflation and artistically extrapolating the technique in new directions. He brought this to ModCon — many people first saw this on the cover of the ModCon book in fact (download a free copy here since it’s out of print) — and we later shot some fun footage of his doing it again for the still hibernating BME movie. Another good friend, journalist and charming body mod superenthusiast Ryoichi Keroppy Maeda, was here for all of that from Japan and brought the idea back home with him, where he walked many other people through it. For whatever reason — and Ryoichi deserves the credit for this I’m sure — it was much more popular in Japan, seeming to find a niche inside both the fetish and suspension worlds. Much of the footage floating around the net of forehead saline is from Ryoichi’s events in Japan, and you can actually see Ryoichi being interviewed about it in the clip above.

These pictures are from the ModBlog cover and Jerome’s video shoots with me.

In the photos on the right we’ve inflated his cheeks as well as just his forehead by the way. In the fetish community breast inflations (of both men and women), are also quite popular — as are the penis and scrotum, the clitoris, the anus, and the lips (both genital and facial). BME has massive galleries on this subject — literally hundreds of thousands of images, stories, and interviews, and my new book also covers it extensively. If you don’t have a BME membership yet, you can find some free saline content with the appropriate ModBlog search (although you’ll get some false positives talking about saline in other contexts), and this NSFW interview (a preview from the new book I just mentioned) also covers fetish-saline in depth: “Impgrin Inflated“

I probably should have started with this instead of mentioning it as a footnote, but for those that are unaware of what you’re seeing in these stories, it’s basically voluntarily induced pitting edema. Saline is dripped via a needle into the forehead (virtually any body part can be inflated), engorging the tissue dramatically until the body gradually reabsorbs it over about 24 hours. Like the medical condition pitting edema, while the tissue is full (of interstitial fluid in the case of an edema, saline in the case of an inflation), it is maleable and can be “sculpted” by pressing into it. Unlike a scrotum inflation, which is more of a “water balloon” when full, normal skin is more like a “sponge” than a “balloon”. Since the saline is held in place by the tissue and can’t flow freely, when you force it into a new shape, it holds that shape for a time. Assuming that proper sterile precautions are followed this is not particularly dangerous.

As to how it feels, well, few people would say it feels good. Most would say it’s mildly unpleasant, but not unpleasant in the way that suspension hurts and can lead to an altered state. More like unpleasant as in a headache. To be honest, it’s more of an “art trick” than a ritual experience. The sort of thing you do for great photos or curiosity, not the sort of thing that teaches you about yourself or gives you a high or all the wonderful things that people get out of suspension. Of course I’m generalizing and some people will get all of that, but overall this is just a cool looking trick that people have been doing for about fifteen years. It’s not new, and it’s certainly not a trend.

But all of this truth that I’ve just typed out is completely irrelevant to the media. Nothing I’ve said here is hard to find out with a minimum of research. But if I’ve learned anything in almost twenty years of first-hand dealings with the media, it’s that the truth is the very last thing they care about. The truth isn’t a virus. The truth is an irrelevancy. All that matters to anyone — be it trash media or be it fallen media aristocracy like National Geographic — is a dumbed down moment of meaningless amusement to sell advertising for garbage we’d be better off without.

BME Hard contributor Erebli has been around for a while.  Hard members will remember his BBQ’d penis, his pancake recipe, and his recent experimentation with superglue.

This time around, he’s going big with a saline injection.

Well, you’ll have to keep on bouncing to see just how big he gets.

END_OF_DOCUMENT_TOKEN_TO_BE_REPLACED

The ball in Times Square is about to drop and Tim’s balls look like they are about to explode! 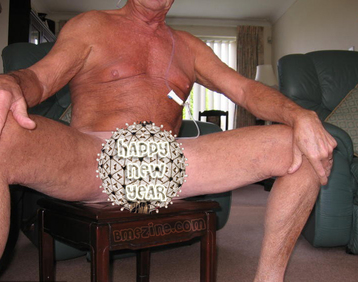 Whether you celebrate tonight by ingesting alcohol or injecting saline (or neither) have a safe, fun night and a great start to 2010. I hope to continue entertaining, educating, challenging and disturbing modblog readers throughout 2010. Here’s a sampling of what I have in store for 2010:

-An in depth look into the life of BME’s punk rock anti-hero perk900.

-Lots more From The Vault features.

-Interviews with some of the most fascinating people on BME who most would never hear of otherwise. I really want to get one with Tiger shark man a true man of the sea, who lives on a boat and has filed his own teeth down to be more shark like.

-And of course, plenty of sexy women, modified genitals and tattoos that make you go “hmmmm”.

Obviously, you can see the non-censored picture from Tim’s BME Hard bonus gallery by simply clicking through.