In addition to being co-owner of Meatshop Tattoo in Copenhagen, Denmark (you’ve seen their amazing work featured many times on ModBlog), Mélanie Poudroux is a motorcycle builder. One of the people working with her at the time had a journalist friend who’d pop in from time to time, and got interested in mods and body play after talking to her, and later bumped into her at Third Eye Tattoo in Victoria while Timb was doing her microchip implant, and they began talking about her interest in suspension, which was the genesis of a lengthy article and unique photoshoot in Australia’s Two Wheels motorcycle culture magazine. The suspension was pierced by Timb Wilton of Third Eye, and the rig was built and welded by Mélanie. 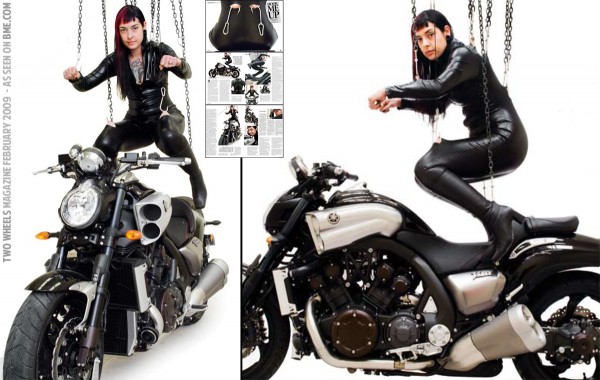 I’m a little behind the times on this post, as the article is from the February 2009 issue, but hopefully that eliminates and possibility that Two Wheels will be bothered that I’m sharing this excerpt from the magazine with you here. Click the picture spread above to see just those shots at full size, or click the three two-page spreads below to zoom in to nice big pictures where you can actually read the text as well. Alternately (and this is probably a better option), click here to download a PDF version.

Christiane and Havve (Wings of Desire/Pain Solution) are in Japan giving workshops and helping spread their expertise as always, and Christiane posted this amazing photo from a suspension demonstration at Vanilla Gallery in Tokyo last night. A beautiful and technically advanced example of the cutting edge rigging they’re known for — I really feel like this captures some space station art moment that should only be possible in the absence of the Earth’s damning gravity.

A stunningly beautiful photo, the sort of thing I can see framed and hanging in a gallery somewhere, is from Bryan Fury, taken at the Street Mirror Expo 2012. In addition to the seated suspension, those playing cards aren’t just stuck on — they’ve been stapled there.