I’ve found this story reprinted in a few papers. The earliest publication I could personally find it in was in The Davenport Daily Leader (December 28, 1884), but it was originally published in the Boston Journal slightly earlier.

Collecting In His Own Body Specimens of the Art From Everywhere.

I heard recently of an unusually odd kind of fad. It is in the possession of a wealthy Portsmouth man, who married an actress once familiarly known in Boston. He is a collector of tattoos. The exhibits are all on his own body, and I am told — it is only a matter of hearsay — that the collection is very rare. He is a connoisseur on the various kinds of tattoos, the methods of the tribes that wear them and their history. A new tattoo is as fascinating to him as a first edition or a bit of Egyptian glass that has survived the art to make it. Only a short time since he heard of a tribe in South America which owned a tattoo of which he had never heard before, and he started post haste for the interior of the southern half of the western continent and returned with the tattoo in his possession.

It surely has the claim of being an original fad, and it is one in which the collector is not likely to have many rivals. Moreover, it is a collection of which no one and no thing can rob him. It cannot be stolen; it cannot be auctioned by his creditors; envy cannot seize upon it, nor experts malign. It costs nothing to keep it, requires no insurance. Of course as an investment one cannot claim anything for it, but it has the advantage of being pursued for its own sake and not in any spirit that can be mistaken.

I really like that last paragraph, it’s really as true today as it was then (other than the first statement being wrong then, and wrong now). Anyway, because I like having pictures with entries, I’ll also share these two ads that ran alongside the article… maybe these could have been used for infected tattoos as well? 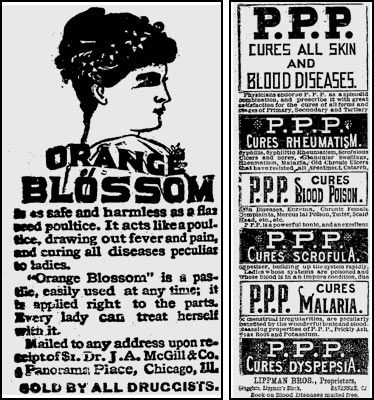