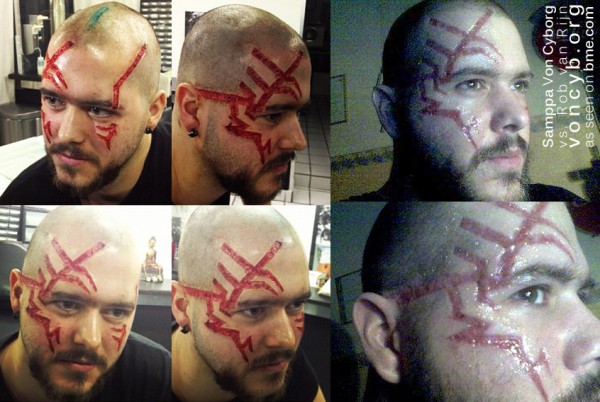 If you are a part of various social networks there’s a good chance that today you saw this crazy coverup by Tim Beck of Freedom Ink Tattoo Co in Peoria, IL as it went viral today. This isn’t surprising, because most people would assume that you couldn’t do a tattoo this bright — and this light — over solid black. There’s been some debate on how this is going to look healed, with some people saying it’s going to disappear completely, even though Tim swears he’s done others and although they do darken a little, overall he feels that he can successfully tattoo new art over solid black.

Steve Truitt of Ascension in Albuquerquer, who is no stranger to ModBlog had one of those typical “piercer arms” tattooed solid black. However, instead of scarring over it or leaving it all black like many do, he had Roman tattoo a bold biomech piece over the solid black, with no laser removal or other preparation in advance. Here is how it looked right after they tattooed it.

And here it is healed, a month later. As you can see, it did get a bit darker, but overall it is still bright and bold, and you’d never know that it was over black. Now, I should point out one important thing — tattooing over solid black is very different than tattooing over a tattoo image. When it’s solid black, you have a regular canvas — the way the inks combine across the tattoo is going to be consistent, rather than having to compensate for the variations below it. So the counter-intuitive truth may be that in some cases it’s actually easier to tattoo over solid black, rather than doing a “normal” coverup!

It’s hard to see in the before photo, but this is actually a cover-up of a cover-up.  That’s right, this is the third dragon to live on that shoulder, and hopefully it’ll be the last one.  Jackie Rabbit took 6 hours over 2 sessions to create this monster.  I think what stands out the most for me is how she managed to get the light colours to stand out while covering up some darker ones.

Jackie Rabbit is in the kitchen and she’s brewing up a big pot of cover-ups.

That there will be at least one “Yum” in the comments.

I love how stark this Kitsune is.  Even though it is a mostly solid black piece, the small bits of shading give it both depth and a sense of movement.  The fact that it’s a cover-up is just the icing on the cake.

Tattoo by Genko from Genko Tattoo in Nagoya, Japan.

Alright everyone, it’s time to remember health-ed class.  First we start with the sperm…

And then we add the egg…

And that’s how babies cover-ups are made!  This one in particular was conceived by Monk at Infinite Art in Toledo, OH.

When you can get a fantastic artist like Jackie Rabbit to do an amazing cover-up like this one.

Jackie works out of Star City Tattoos in Roanoke, VA.

Cover-ups can be a tricky thing to pull off.  The new design has to take the old work into account, both in shape and ink choices.  The ideal result being a tattoo that covers the original one, and making the owner happy.  For Christina Michelle, this owl by Justin Lamoreux in Milwaukee, came out just the way she wanted it.