This photo is from two years ago when Florian and his girlfriend were in Kenya. On their way back from a safari they passed a Maasai village, where they decided to stop. This was their first reaction when they saw him and his stretched ears — perhaps the first time they’d seen a white guy with stretched ears, a practise that is all but dying out in their own culture. A very fun, friendly encounter that saw them dancing together not long after. 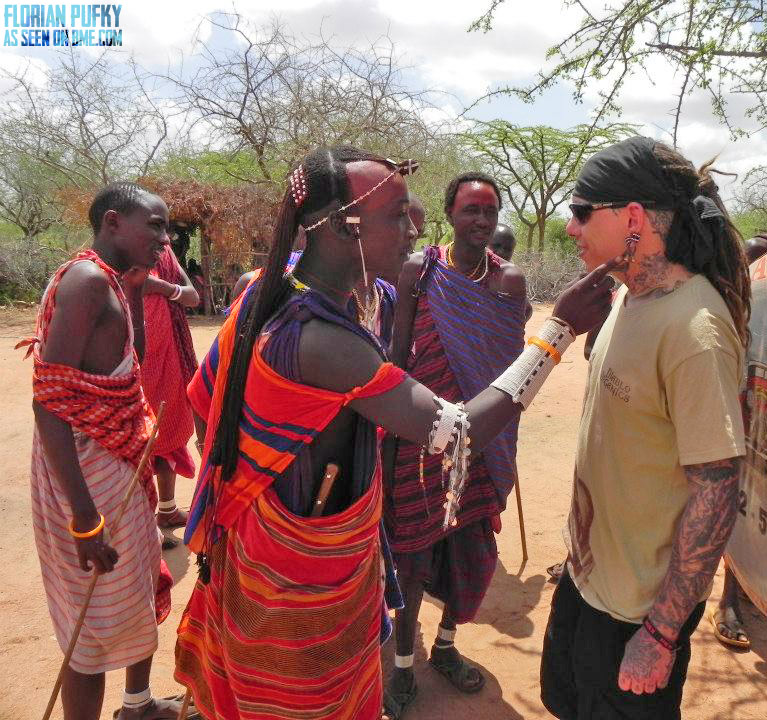 His picture reminded me — when Rachel and I were in Africa (an amazing experience) in 2004, in Durban we bumped into an older Zulu that made his living taking photos with tourists. As you can imagine he was a bit beat down by life, unsurprising given that he’d been essentially reduced to a zoo exhibit, turned into a curiosity for visitors due to his cultural background. So there wasn’t any dancing. He did however appear happy, or at least bemused, to meet a white guy with stretched ears as well. 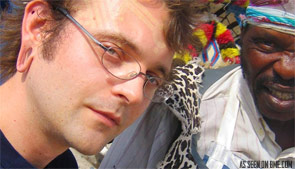 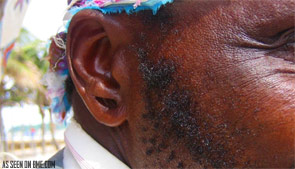 Lukas Zpira and The Chaøs Chrønicles are currently seeking crowd-funding for the next stage in their artistic research journey, this chapter — which is already ongoing — taking place over about 2,500 miles of road trip from Guadalajara, Mexico, down through Guatemala, El Salvador, Honduras, Nicaragua, and ending up in Costa Rica. You can learn more about this stage of the project here on the blog (as well as on Mayliss’s White Rabbit blog), where you’ll find the photo below and any more gems. It’s only a relatively small number that they need to raise to make this project a reality, and those who donate at www.ulule.com/cronicasdelcaos/ can get a variety of rewards like postcards from every city visited, printed and signed photos, and more.

I’ve just made a donation to this by the way — my general policy when I post about projects requesting money is that I wouldn’t ask you to donate to something that I don’t think is worthwhile myself. To make a general comment about the Internet, too many people think that it’s “good enough” to just share information like this. That by spreading the word, you’ve helped enough. Now, of course spreading the word is a good thing, but it means very little if it doesn’t also come with actual donations. So I just want to put it on the record that if I suggest to you that something is worth donating to, you can feel secure that I’m not just trying to get you to pay for something I believe in. I supported this project because I think Lukas is an artist that’s out there making the world a better place and I’d like to see his work continue. To say nothing of the fact that Lukas is something that’s given a lot to me personally and a lot to this community as a whole and I feel that we owe him.

You may remember a little while ago I posted a charming entry about Christopher doing Peace Corps (I’ll say it again — what’s stopping YOU from joining?) work in Namibia and how the rural kids went curious-crazy over his tattoos, something they’d never seen before to such a large and bright extent.

After seeing that post, Aaron Brink wrote me about his own time over the last two summers spent in Burundi (an African country between DR Congo and Tanzania, just south of Rwanda). Like Christopher’s experience, the people there — and not just the kids — were completely enamored with his tattoos. Everywhere he went he had crowds of people following him and gathering around him trying to get a better look at his tattoos or to touch them. Not recognizing them as tattoos, and wondering if they were some sort of body paint or drawing, many people’s first response was to try and rub them off! These first pictures are from the village of Busiga.

This actually gave him a fun way to break the ice with the kids from the “Homes of Hope Orphanage” — when they broke out the facepaints, the only thing the kids wanted was tattoos of their own on their legs!

If you are able to watch Facebook videos, here’s a clip of kids:

They got a kick out of his piercings as well — this cute little boy named Brian from the orphanage is trying to put a film canister into Aaron’s stretched lobe in this piercing. At this point it is probably more common to see young people in America with stretched lobes than in most parts of Africa, where the traditional body modification practices are limited to certain rural regions and older generations.

Finally, showing that body modification truly knows no boundaries, not just across illusory racial and cultural lines like the people Christopher and Aaron met in Namibia and Burundi respectively, but also across species lines! Aaron spent some time with a young chimpanzee named Tina at the “zoo”, and she as well was very curious about his tattoos!!! (In every single picture, it’s all she’s interested in or touching).

AND P.S. Argh! Let me start by saying I feel like a DOPE because I captioned all these photos as being from “Adam” when they are from “Aaron”… and now I’ve gone and saved them and it’s too late at night to change them and still get the rest I need. My sincerest bleary-eyed and clumsy-fingered and calcium-riddled-brain apologies to Adam Aaron.

Here is a joy kids growing up in the West these days with our bod-mod-saturated media will never be able to experience (or at least remember, since it happens to them when they are babies) — seeing tattoos for the very first time! Tracy’s good friend Christopher just joined the Peace Corps and is teaching math for the next two years in Namibia. The kids reacted with complete amazement not to his white skin and blond hair like we stereotypically hear in old Victorian explorer stories, but to his colourful fully tattooed sleeves, something that just doesn’t exist in most of rural Africa, so it was a real treat for them. Rachel and I were in Windhoek, Namibia almost ten years ago, but since we never went into the rural areas other than to go on a (quite wonderful, but very touristy) safari, mostly we were being glared at by snooty wanna-be-aristocrat German expats. Christopher’s encounter is much more charming.

PS. If this entry gets you thinking, here’s a map of all the places you can go if you join the Peace Corps — peacecorps.gov/learn/wherepc/ — much better opportunities for international adventure than joining the Military War Corps, I would say, plus the odds of getting your limbs blown off are much lower, and you’ll be helping people, not killing and oppressing them. They’ll excitedly poke at your tattoos, rather than cowering in fear and shooting at you.

As I’m sure you’ve seen before, the women of the Apatani (or Tani) Tribe who live an agricultural life in the Ziro valley of India wear massive nose jewelry of the sort championed more recently by bodmod celebrities like Pauly Unstoppable. They have only an oral history, with no written records, but legend holds that the nose jewelry has a dark history. The Apatani women were said to be the most beautiful of the region, and as a result their villages were constantly raided by neighboring tribes seeking to kidnap women to possess and rape. To defend themselves, the women began stretching the jewelry in their nostrils, tattooing a line down the centre of their face and then five lines on their chin. This was said to look so hideous to the raiders that they stopped stealing women, and the custom persisted until recently, but the youngest woman still wearing the style is currently forty-two years old.

With only an oral history, there is no way to know for sure whether this story is true, but I very strongly dispute this history. First of all, the tattooing is symmetrical in a way that accentuates beauty rather than disrupting it. A tattoo of this type draws attention to beauty. I do not believe it is the act of someone trying to damage beauty. The nostril stretchings as well, while highly unusual, are also symmetrical. Not only that, but they are a natural extension of body modification trends that were common in the area, and are consistent from person to person, thus becoming an aesthetic standard, rather than a disruption thereof. Are we really do believe that a hundred thousand people are going to go out overnight and mar their faces identically to spite raiding parties? It’s patently ridiculous. Especially when you consider — and our own culture is proof of this, with stretched ears going from disgusting to normal in a decade — that after half a generation of all women doing this that it would be considered a normal sign of an attractive woman.

The same ridiculous lie is often told of lip plates, but I think it is far, far, far more likely that this is a case of Victorian anthropologists being disgusted by it and not being able to wrap their head around this being beautiful to these people. So after ten years of these “experts” writing and repeating the story that it was a mark of ugliness, even the tribe started to believe it. After all, with only an oral history, it’s impossible to prove it one way or the other… and while that means we’ll never know for sure, every bit of my logic and experience tells me that this was done for beauty, not for ugliness.

I’m sure a lot of tattooed women have heard that phrase before.  And the answer is pretty simple.  They’ll look beautiful.

One of the galleries that doesn’t get a lot of coverage is the Art Gallery.  It’s located in the culture section of the galleries, and is a showcase of artwork from many talented artists the world over.  Paintings, sketches, sculpture, and photography are just some of the mediums you’ll find there.  This example comes from photographer Ivana O. whose work you saw earlier today with the corset photo.

I’d like everyone to meet Phoenix, IAM:Sick Girl’s son.  Valerie is IAM’s newest addition to the modified moms club.

Bmxkillhorse here joins the illustrious ranks of the BMEBoys with this shot of him playing around in an empty pool.  This actually comes from the BME Culture galleries.  These galleries exist for members of the community to send in photos of themselves doing the things they love.  Be it BBQs in the summer, to bowling with weirdos in the fall, or lounging on a beach to get away from winter’s cold, the BME Culture galleries are here for you to share your lives with the rest of the community.

BME member eLHATABorov just had his 21st birthday and to celebrate his dad’s girlfriend baked him a BME cake!  It’s always nice to see parents embracing their child’s culture, as opposed to shunning it.

No word on what kind of cake it was.