Brian (iam:xPUREx), body piercer and modification artist extraordinaire, has finally followed the advice of his friends, going solo and opening his own shop in Brooklyn, New York. Brian’s name has become synonymous with quality body modification and impeccable attention to detail. In the years since I first met him (when he was working part-time as a piercer in Connecticut), his skill reputation has grown in leaps and bounds.

In the opening days it will be only Joy (iam:maat) and Brian.  If everything goes as planned, in the next few weeks a gentleman named Brett (who tattooed the phenomenal leg sleeve of iam:turtle) will moving from Texas to join the crew, along with Monica Henk (iam:MalaSangre). Joy’s work was highlighted in the first entry of ModBlog.


I am the owner, but far from being a "boss". the shop will be very casually run, at least for now, to where everyone will have a say about anything that goes on. of course, I'll have the final word, but I can be pretty easily pressured.

How I chose these particular artists is a tough question. Beside Joy, who was originally going to partner with me until that fell through, the other artists just happened to fall into place. I've known monica for years. She's a great artist, and I really like her a lot.

As a strong drug free advocate, Brian got the word PURE tattooed in large letters across his lower back about eight years ago. When he first logged onto IAM, he decided to use PURE as his IAM username (xPUREx). People familiar with the modification industry began recognizing him by that name — and sometimes only that name — so when it was time to open his own place he couldn’t think of any other name that would be as suitable.

I asked Brian if there is a direct affiliation between Pure Body Arts and the Rites of Passage suspension group in which both he and Joy are heavily involved.


Even though Joy and I are both part of ROP, the shop has no affiliation other than all of my close, close friends being part of ROP and helping me out tremendously with the shop as well.

Because Brian is the professional here, I’ll let him tell you about the jewelry he’ll be using:

I did a LOT of homework and made orders with a large amount of companies for my jewelry. Namely Anatometal, Liquid Metal, AC Steel, Leroi, a little bit of Titanium from Cold Steel, and step-down external from Blue Mountain Steel. Those are for the basics. Starting display case jewelry from Death Star Organics, Glasswear Studios, and some novelty things from Steel Skin.

As a bit of a voyeur and as someone who is fond of both Brian and his long-time lady friend Caitlyn (iam:Angie Dickinson), I’ve been following the progress of the preparations for Pure Body Arts. I’ve read their blog entries in which Caitlyn designed the web page, drove Brian wherever he needed to be, and was just an all-around awesome friend to Brian and to his business. I didn’t want to let an opportunity pass by, and asked Brian if he had a few words to say about Caitlyn:


Caitlyn has helped me tremendously with everything. She did a LOT of driving for me, helped with building when she could, Loaned me things I'd need, gave me others, built my website, started building the shop website, designed my business cards, and loved me very much.

Pure can be reached via subway, taking the L train on the Montrose stop. Walk west on Montrose off the train, and hang a left onto Graham Avenue. You’ll find them on Boerum Street, on the corner at Graham. Also, the J, M, or Z train will take you to Lorimer where you can walk one block north and 2 blocks east on Boerum Street. Either way, it’s a 3 block walk. They are open from noon until 8:00 p.m. every day except Wednesdays.

So, there you have it. Pure Body Arts is now open for business. If you are considering piercing and modification or tattooing, do yourself a favor and add Pure to the list of studios you check. (I’d say, “If you’re in the area,” but Brian and Joy are worth a road trip.) 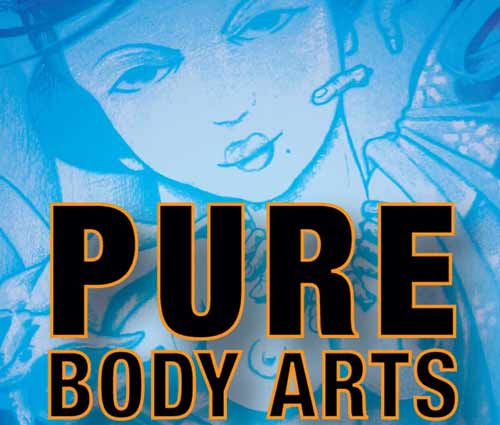