Jester Mayhone (facebook.com/Jestermayhone) is one of those very rare individuals who has chosen to undergo a concept transformation — where the majority of his modifications all work together push him toward a new total-body artistic vision. Other well known individuals on the short list of those who’ve done include The Lizardman, The Enigma, and the late Dennis Avner. If you’d like to learn more about Jester and his art, both his body and his paintings, you can here’s an earlier more extensive post, but the short version is that he’s using tattoos and other body modifications to evolve himself into his vision of a jester.

Jester jokes that yesterday he had the “best Valentines day ever” as he headed down to see his friends at Tomah Tattoo who, after sketching various ideas on his face freehand (based on designs Jester had spent weeks drawing on photos of himself), decided to go ahead and set it in ink. Only the start of the linework is done now, but when it’s finished it’ll be colored in with random patches — the mock-up I drew is there to illustrate what it might become and is just a quick “what if” Photoshop job. For me the design brings to mind many themes — I see everything from Jester’s main theme to horror movie masks, patched-together scarecrow and ragdolls, and even a bit of Frankenstein’s monster!

Zoom in for a larger view. Once his entire body is done like this, he will be one of the most striking and uniquely tattooed creatures walking the planet. 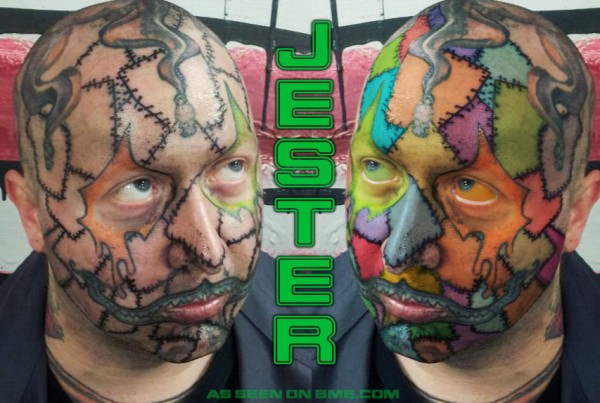