Arseniy Andersson‘s submissions to BME are never dull, that’s for sure!  He did the ear pointing and tongue splitting in the photo below.  The transdermals were done by Lari Lahti and Samppa Von Cyborg, the eyeballs by xRonix. 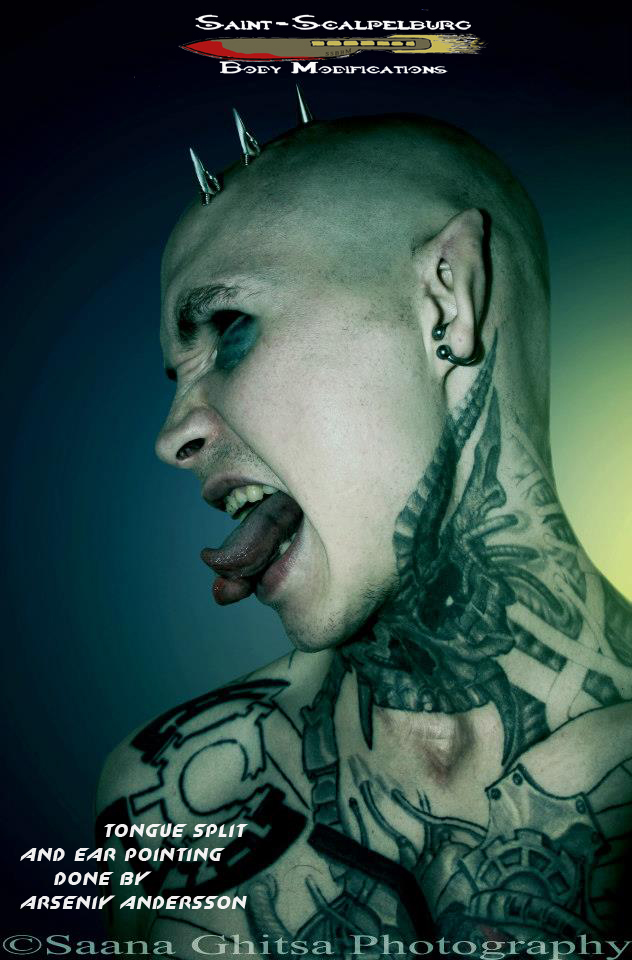 The beautiful rachietartz has sent in some new photos and it felt like a good day for a BMEgirl update. 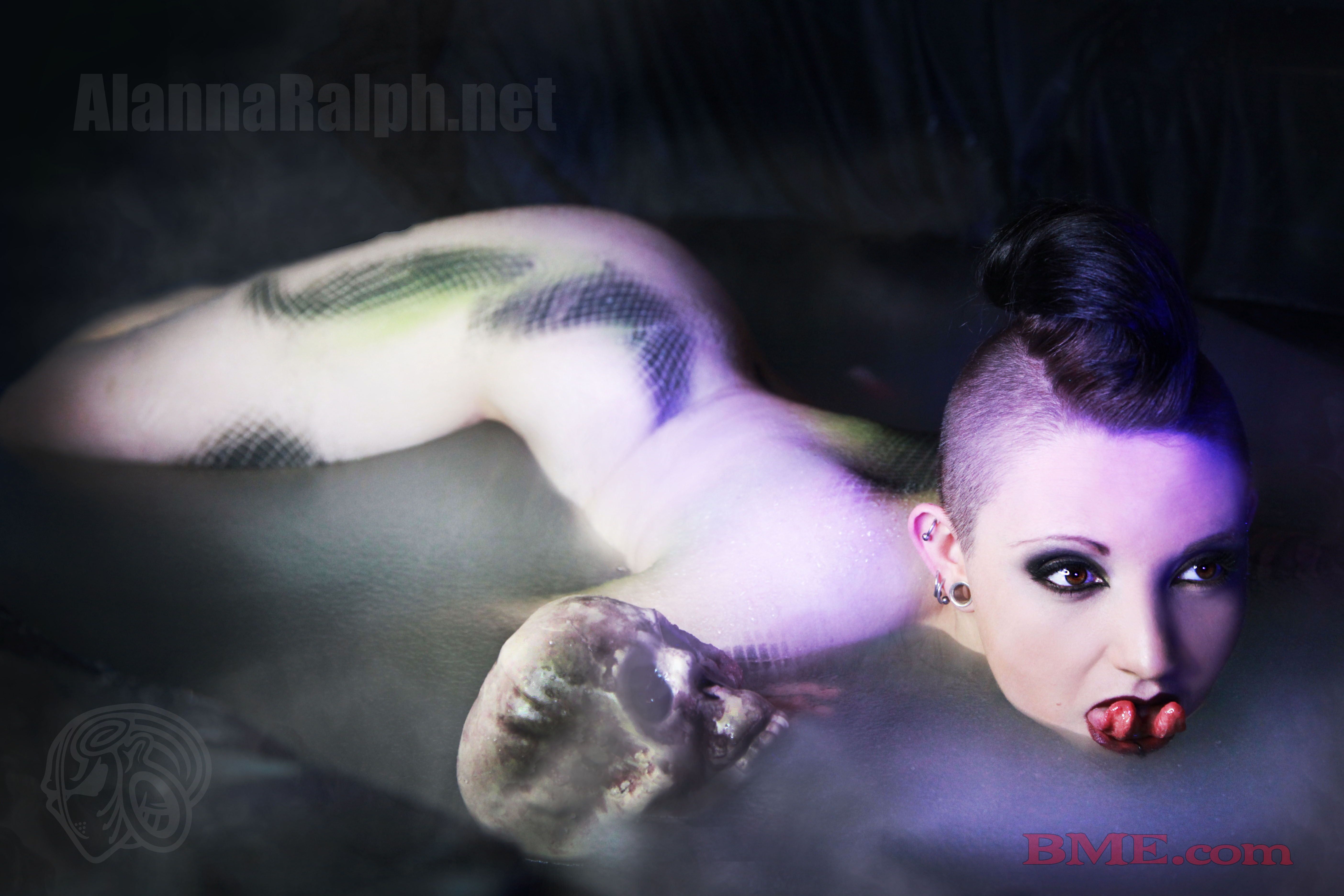 *I have stolen today’s title from a song in The Devil’s Carnival.  Coming up with titles is hard!

Have a membership?  Check out the BMEgirls gallery!

A trailer for the new “Evil Dead” remake was played at and leaked from ComicCon, and it “wallows in limb-severing and tongue-splitting” because apparently when you are driven into evil madness, it expresses itself with DIY body modification. Tell me something I didn’t already know by the time I was summoning demons at age eight while sticking needles in my unmentionables. Anyway, here’s a screencap, and you can watch the cam-leak in the attached video as well — the tongue splitting is the highlight knockout punch that they put right at the very end of the trailer to seal the deal. Because you know there’s nothing more fucked up than someone splitting their own tongue. Gotta love mainstreaminbg and gentrification.

[Edit: The video has been pulled, unsurprisingly, so you'll have to wait for the official trailer to be posted or make due with the thumbnails I snagged. At least they should be legal fair use, not that this stops people from filing over-reaching DMCA takedown demands...] 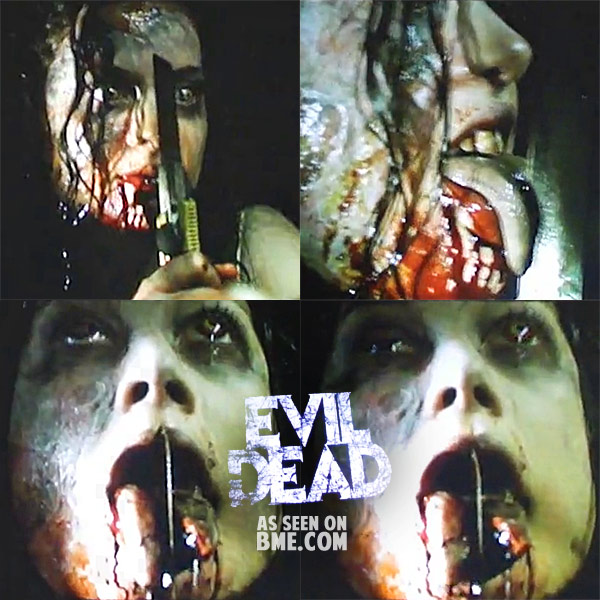 One of the most amazing thing about tongue splits is that they heal crazy fucking fast, have no long term risks, and have the highest satisfaction rate of any body modification out there. They heal faster than tongue piercings — and probably faster than any other modification with the exception of tattoos — and they’re not going to chip your teeth. That said, it does require skilled hands to do it right. While it is true that nightmare incompetent tongue splits by DIY home doctors tend to be survivable and heal just fine, they’re playing with fire and at a minimum you’ll have way more pain, fear, and there’s a solid chance you won’t get as good looking or deep of a split. It is the sort of thing you should want to do responsibly. Don’t take my comment on how easily it heals and how happy people are with them to mean you can have your dog do it, even if he is very well-trained border collie.

This example was done by the fully human Gladix at On Edge Piercing & Tattooing in The Hague, with beautifully clean looking suturing. Only seven days later and Tirza’s tongue split looks incredible. Nice and deep, perfectly rounded edges without any scarring. Superb work. I should mention that even though the tongue split looks completely healed at this point, but it could take a few weeks more before it can truly be considered fully healed.

Here’s a great — and fun — picture of Cesar and Alba, who just got themselves a set of matching tongue splits done by Hugo of Biotek in Toulouse, France. I love the fact that a significant portion of their mods mirror beautifully, to say nothing of their matching blue hair! I know they’ll be happy with the results of this procedure, because in fifteen years of people getting tongues split, I don’t think I have ever heard a single regret.

I was recently reminded that tongue splits are now in their 15th year. Here’s my tongue split, done (according to the time stamp on the photos), August 13th, 1997, which was the 4th known tongue split if memory serves. A guy in Italy was done by his dentist in 1996/1997, and then Erik Sprague/The Lizardman tracked down a doctor in Albany and was the first to get the procedure done by him using an argon Laser. I was (I believe) the third — Tom Brazda took these pictures when he came to visit me in Philly. It is The Lizardman who I credit with having launched this movement, even though he was technically not the “first”. After me I believe the doctor did about ten more people (Erik would know better as he referred many of them) and then stopped when the media attention started and he got worried about losing his license. At about the same time, although not as publicly, Dustin, split her own tongue slowly using the tie-off method. This procedure was slow and painful, and most people who attempted it gave up before finishing. Things moved very slowly over the next year, with a few people quietly attempting different procedures — for example, Tim Cridland (the Torture King) gave himself a short split by scalpelling back bit by bit, as the initial Italian mod enthusiast had done.

After that, “renegade practitioners” started testing the waters, for example Todd Bertrang did the procedure with a scalpel and Patrick Bartholomew doing it with his cautery tool, proving it could be done by a bodmod practitioner outside of a doctor’s office, and then Pandora’s box was open. BME’s tongue splitting gallery, which is dated and the most comprehensive history anywhere on this subject, show only a tiny number of tongue splits in 1998. But then more in 1999, and in 2000 the procedure was spreading quickly with more and more practitioners adding it to their repetoire as experience proved that you weren’t going to kill your clients! By 2001, virtually every single BME update saw new tongue splitting pictures added to the galleries.

As of when I write this post, I believe there are six or seven people who can claim to be in the “15 year club” — that said, you never know what went on behind closed doors, unpublished. By the end of the year that number is at most twenty, and I doubt it’s even that high. But by the end of 2000? The number starting to roll in is HUGE, and tongue splitting has come of age. And maybe most importantly, of all body modifications, tongue splits are one of the only where I don’t think I’ve ever heard a single regret. 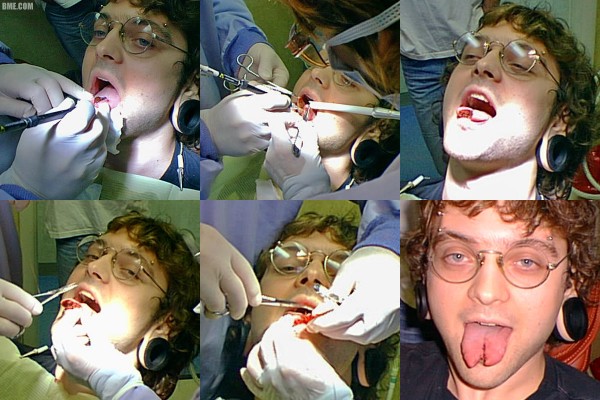 If any part of the body has mutant healing factor, it’s the tongue. I don’t think there’s any other part of the body you can sever in half like this and have it looking so healthy a week later… And that’s what you’ve got here, on the left a tongue freshly split at On Edge in the Hague (onedge.nl) — beautifully sutured as well — and on the right, seven days of healing and the sutures are out and the tongue looks just beautiful. I’m sure they’ll round out a bit, but this person has been quite lucky with how pointy their tips are — very snakelike!

Here’s KeighlaNight with her lucky beau, Shawn O’Hare, playing with their tongues.  Did I mention how lucky he is?  Granted, for some of you, she’s the lucky one here.

One of my favorite, JAP’s (Jewish American Princesses) Hannah, sent me this cleverly ironic photo.  I mean really, clamps? How un-kosher is that? Or wait, is that not where the implied irony is supposed to be?

Seal never said anything against using tongue when getting a kiss from a rose on the grey.

Alicja from Self Sacrifice in Soho, London, England did the piercings and the split for the owner of this particular tongue.