Tongue tattoos are one of the holy grails of body modification, and while there has been success in permanently staining tongues to a new color by injecting ink into the muscle (which may or may not be safe), few people have achieved consistent success in tattooing actual designs that last. It certainly can be done, but it’s rare, and I can’t tell you that anyone has it figured out — for all I know the cases in which it was successful had more to do with the individual’s anatomy than the technique used by the artist. The main problem is that the lingual epithelium, mucosa, and taste buds “wear out” quickly with the entire surface of the tongue regenerating roughly every ten days.

Darrin had such an over-the-top WIN with his incredible leg tattoos by Leo Zulueta (click here to see them, and if you don’t know what they represent, think of his old “wlfdrgn” screenname), that he can’t be too upset that his tongue tattoo fell in the FAIL file. In 2011 he had Eric Clark experimentally tattoo his tongue using a machine, and as you can see it fell out almost immediately. An unsuccessful tattoo on normal skin usually lasts a week, but Darrin’s tongue tattoo was already well on it’s way out by the day after, and by day three, the majority was gone. The final picture below is how his tongue appears now. There are still particles of ink — which shows it’s possible — but the vast majority fell out.

Anyone have better success with a tongue tattoo? Send them in, I’d love to see them. BME’s small gallery of tongue tattoo photos as well as the tongue tattoo posts on ModBlog seem to show only fresh examples, with no healed pieces, suggesting to me that they likely all fell out. I’d love to know the answer — is it as simple as tattooing super deep and planting the pigment in the permanent muscle tissue? Or does it just require a dozen touch ups? Or…?

Shortly after this photo was taken, Mario (pictured above) climbed a vine up to a cloud and punched the shit out of a turtle. Err, wait, this is Andres, and he says:

Mushrooms have always been seen as a way to get in contact with inner knowledge. The symbolism [of this tattoo] is to drive my inner knowledge out of my body, through my tongue and turn it into words of knowledge.

I must admit I nearly wet myself laughing when I first saw this photo of Terry‘s Girls’ Bathroom tongue tattoo.

So ladies, if you ever find yourself in the Grand Rapids (snigger) area and are dying for a piss, you know who to call! Just form an orderly queue.

This tongue tattoo is by Alex at Studio Enigma in Queens, Howard Beach. At first I just assumed it was a gimmick, because it says “kiss” and it’s on a tongue, but now that I think of it a bit more, since she’s also got “Poison” tattooed on her lower lip (wait for the BME update later in the week to see that), I’m thinking maybe it’s music inspired? 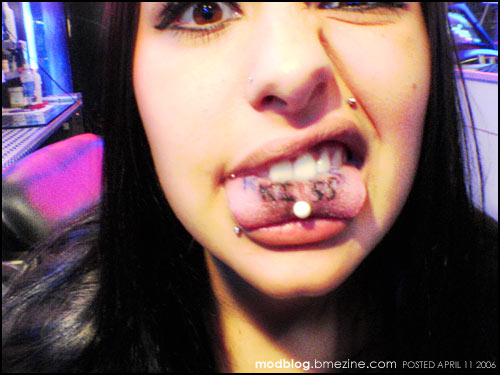 (Oh, and yes, this will almost certainly fall out fairly quickly).