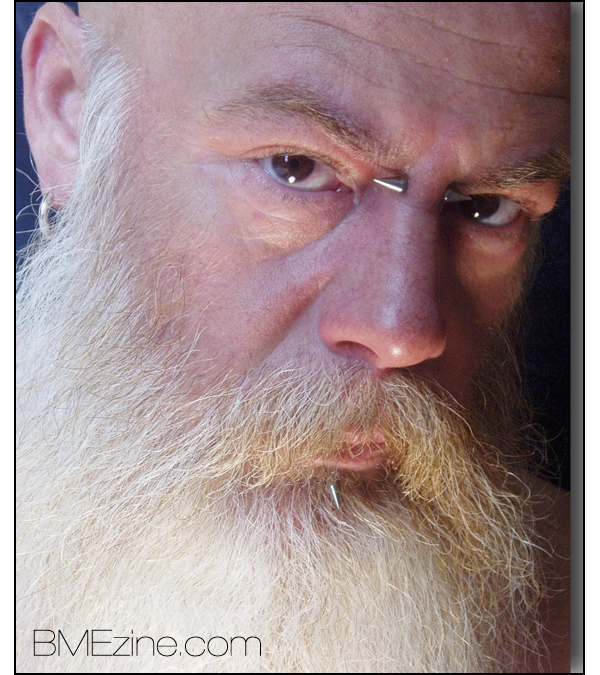 I was raised in the traditional Roman Catholic home. “Normalcy” was the standard. Throughout my formative years, I was focused on having a good education. The “real” world remained outside of my realm of existence; a private education saw to that. It was not until I entered college that I came in contact with a larger slice of life. I met people who were not Catholic, not white, and not straight. By the end of my collegiate years, I discovered that my real education was just beginning.

After graduation I discovered that I was not going to give my family the grandchildren that they wanted; stereotypes have a foundation, but are not the norm; leather has a function that has nothing to do with fashion; and piercings piqued my interest. The last twenty years or so have brought many revelations and piercings. I currently have nine. Not a lot by many people’s standards, but I ain’t dead yet! The simple stud from the mall piercings kiosk is gone. There are three ear piercings. They are currently holding tunnels and the possibility of making them larger exists. The erl through the bridge of my nose causes vast discussions. My kids, (students — nope, the parents have no grandchildren from my loins. All of that seed went into mouths and asses) from time to time, ask why I have a hole through my nose. I tell them that I was a parakeet in a former life. My friends laugh or cringe when I stick drink toothpicks through my septum. I have started keeping the labret in at work. The other piercings cannot be seen. My pierced nips work in concert with my last piercing, the PA.

What does the future hold? This summer I think I am going to work on an eyebrow piercing. Dermal piercings are hot, but I think they would interfere too much with my leather gear. Before I’m dead, the plans are a Jacob’s Ladder for the cock; a full body tattoo (including the shaved head) telling the story of the eternal battle between the Berserker and the Ulfendhar (sorry, I have never found a consistent spelling) within me (see? I told you that I learned a lot after college); and whatever shit we create in the future.

Damn, did not realize how epiphanic this writing would be! Whoda thunk it?

30 thoughts on “Son the Father”