I was going to hold off on this article until later in the week, but then I realized that I’d be depriving people of a really special treat.

So I was going through the newsfeed submissions when I found this article on an exhibit currently going on at the Wellcome Collection in London.  The exhibit is titled “Skin” and it showcases the significance different cultures have placed on skin over the centuries.  It includes images of early anatomical lessons, as well as skin samples preserved to showcase the tattoos on the donor.

A black and white photograph of a patient in a Parisian hospital is the first piece in the exhibition. Running the length of the patient’s back is a giant scar.

“This photograph sums up a lot of the underlying themes in the exhibition, first and foremost the exploration of skin as a physical and metaphorical frontier between the inside and outside of the body,” co-curator of the exhibition Lucy Shanahan told Reuters.

Pieces of tattooed human skin from the 19th century are on display beside a case devoted to the Maori tradition of tattooing.

Now I know what you’re thinking, “That’s it Rob?  An art gallery?  What kind of treat is that?”.  Well, I have a simple answer to that.  Keep reading.

Now after reading about the exhibit, I thought to myself, “Self, what can I post that would go well with a story about the historical study of skin?”.  Well, I started to look around when I heard the familiar chime of an e-mail hitting my inbox.  I switch windows to find an e-mail from Jen.  In it contained something that some of you may have seen before, but I’m guessing a lot of people haven’t.

The following is a video from a 1995 documentary on a very young Allen Falkner.  In it Alan talks about the importance of skin and flesh, and the significance he puts on working with it.  I could go on, but I’ll let Allen take it from here.

It’s interesting to look back 15 years, or 1500 years, and see just how much the modification of skin has played an important role in our cultural development.  While techniques and procedures have changed over the years, the importance we as humans put on identifying ourselves through our skin is still present.  In the video Allen has captured the essence of realizing that the skin is much more than just a simple organ covering our bodies.  The skin can serve as a doorway to both spiritual enlightenment and personal satisfaction.  Through modifications such as suspensions, one can not only learn about themselves, but also how they wish to become through whatever transformative act they choose.

If you don’t have time right at this moment to watch the video, I encourage you to come back to ModBlog when you can and watch it in its entirety.  This is our version of a historical document, one that will one day be added to a historical exhibit such as the one going on at the Wellcome Gallery now.

If you have ever suspended, watched a suspension, thought about suspending or even just enjoyed a photo of a suspension, you should probably go wish this old fart a happy birthday. 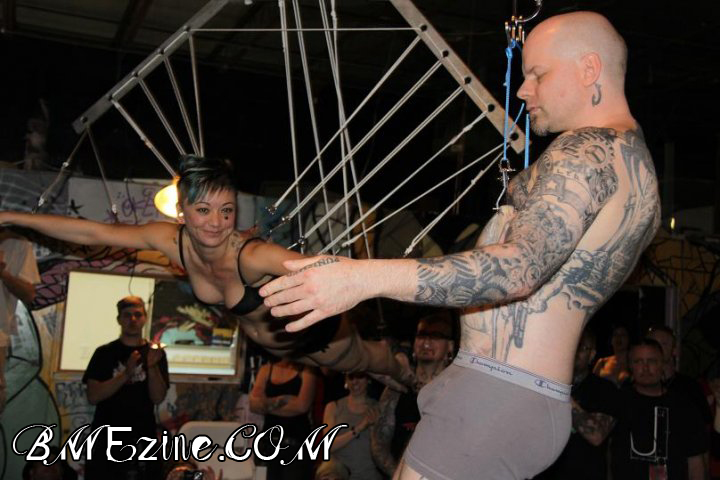 This picture took place at the recent Dallas Suspension Practitioners Convention. What this photo doesn’t show well is the fact Allen and Samar are gracefully balanced and rotating on a spinning beam. Photo credit goes to Rolf, who took dozens of awesome pictures of the event.

As I am sure many of you have noticed BMEzine’s galleries have not updated in quite a while. Well, rest assured Rachel and crew are working diligently on getting the new BME site up (it may actually go live tomorrow), so updates will soon be back to their regular level of frequency.

For the time being though, Modblog pickings have been pretty slim, which is why I haven’t been posting as much lately. In an attempt to gain some content, I have been messaging people on IAM.

I knew Allen had a ton of pics from the Annual Agro Super Pull in Houston, so I shot him a message and asked for his top picks.  Needless to say, he had a bunch to choose from. Of the amazing pictures, none seemed more modblog worthy than these two shots from Mary Beth’s iphone showing the 30 person super pull.

That’s cool and all, but if you want to see it become a little more “super”, keep on keeping on.

END_OF_DOCUMENT_TOKEN_TO_BE_REPLACED

Well maybe not, but the procedure of eyeball tattooing that he has been known to perform has.

Thanks to  Allen Falkner for passing on this video to me.

Holy crap, it worked! Welcome, friends, to the inaugural BME Podcast. Isn’t this exciting? We figured it was time to revive the old BME Radio format and spruce it up a bit with all sorts of Web 2.0 nonsense, and so here we are. As I mention on the show, this is very much still in the experimental stages, so any and all feedback is very much appreciated, both in terms of the sound quality and technical aspects, as well as guests you’d like to hear and topics and issues you’d like to be discussed. If things go well, you could be hearing a whole lot more of my deep and manly timbre.

On today’s podcast, our guest is Allen Falkner, who joins us to discuss the upcoming SusCon he’s organizing, Nevada’s current attempt to ban suspension, the six-hour suspension Chris Glunt just performed, and more. (Also, visit him at Fade Fast for all your tattoo removal needs!)

Right-click and “Save Target/Link As” to download the .mp3 directly