Holy crap, Roni’s (x-roni-x.com) makeup is amazing every day of the year, so I wouldn’t have expected less on Halloween, but wow, this skull/zombie creation is over the top. The dark eye sockets are wild due to her black eye tattoos, and I’m totally loving the use of her forehead implants as an exposed skull bone.

PS. Click here for an “everyday” photo for comparison. 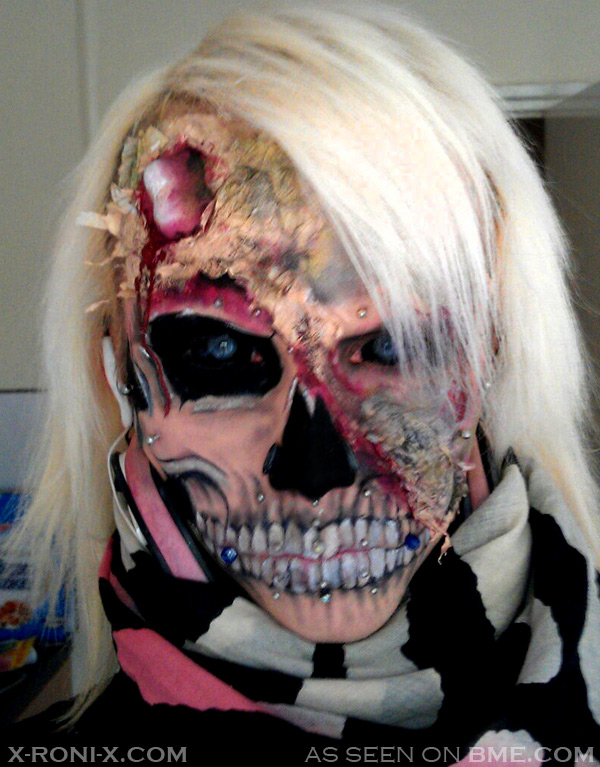 Pauly Unstoppable just posted a new picture of his eyeball tattoo. Along with me, he’s one of a tiny handful of people with a partial eyeball tattoo. On the frightening day when Pauly, Josh, and myself sat with Howie debating who would be the first person in almost a hundred years to offer. Pauly, who already had extensive work by Howie, stepped up to be sacrificed to the mod gods first. This also meant that his eye was done with a traditional tattoo needle, rather than injection. Not long after doing it, we could see that most of the ink was coming right back out of the pinprick holes, and Pauly wasn’t going to be walking away with much of an eyeball tattoo that day. First to go under the needle definitely, but he would have to wait for a later encounter to add some more ink via the now-verified injection method. Unlike mine, which looks like a strange diseased lump, Pauly ended up with something that’s more like a flower or a purple cloud of troll fart gas depending on your point of view. Deceptively beautiful either way, and I think it is about five years old in this photo.

I wanted to add some trivia as well while I’m talking about Pauly. A while back one of Pauly Unstoppable’s fans had some well-meaning fun in Photoshop attempting to edit off his body modifications. There’s something a little strange about how it turned out, although it is a passable amateur shop-job. But there’s something about it that doesn’t feel right.

It’s not quite “cover-up makeup” or anything but Pauly just posted a picture of himself with a facial mudbath (deep cleansing blue corn mask to be specific) or in preparation for his job as a mime or something. I’m sharing it here for those who are curious as to the impact that the facial tattoos and piercings have on the aesthetic of his face. Unlike with the Photoshop job, it’s easier to hide his tattoos than his cheek scars!

This is Ashley. Ashley is awesome. Check out her mad make-up skills! She is currently attending a prestigious college in Toronto for facial reconstruction. I’d say she could teach her educators a thing or two! 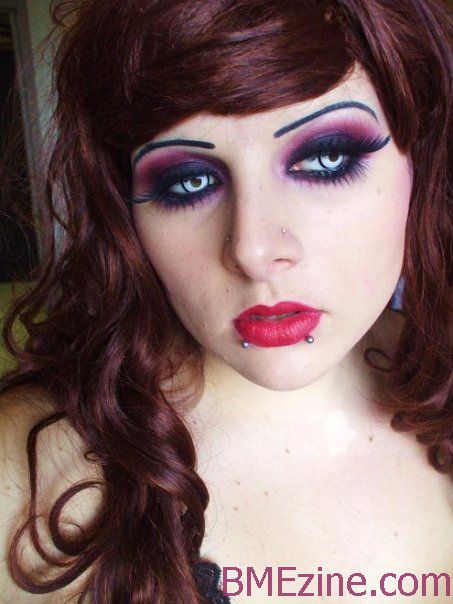 More of Ash’s amazing work after the break.

END_OF_DOCUMENT_TOKEN_TO_BE_REPLACED

Returning champion MissDuveaux checks in with this backstage shot from a high-fashion photo-shoot (with tattoos!) she did recently with Feriet Tunc.