I’m sure everyone knows what halftoning is, if not by name — it’s creating a photographic image by using a pattern of dots, with the dots being different sizes to represent different levels of darkness. Like how newspapers print photos. What you may not know is that you don’t have to use dots — lines are commonly used (and in fact are a built in feature in most photo editing software), but this is the first time I’ve ever seen a tattoo take a common geometric swastika pattern and mix it up with halftoning techniques to represent a photographic image through variance in the line weight of a geometric tattoo. I suspect though it’s no surprise that this Buddha comes from London’s Divine Canvas (divine-canvas.com), tattooed by Delphine Noiztoy as a design collaboration with Myoshka. If you’re thinking the skin of the tattoo looks a little annoyed, that may be because it was done over a single brutally long eleven hour sit. I’m thrilled though to see people finding new ways to express geometric tattooing, because after a while it starts to all look the same — no one is going to say that about this one though!!! Click the cropped photo to see an uncropped version. 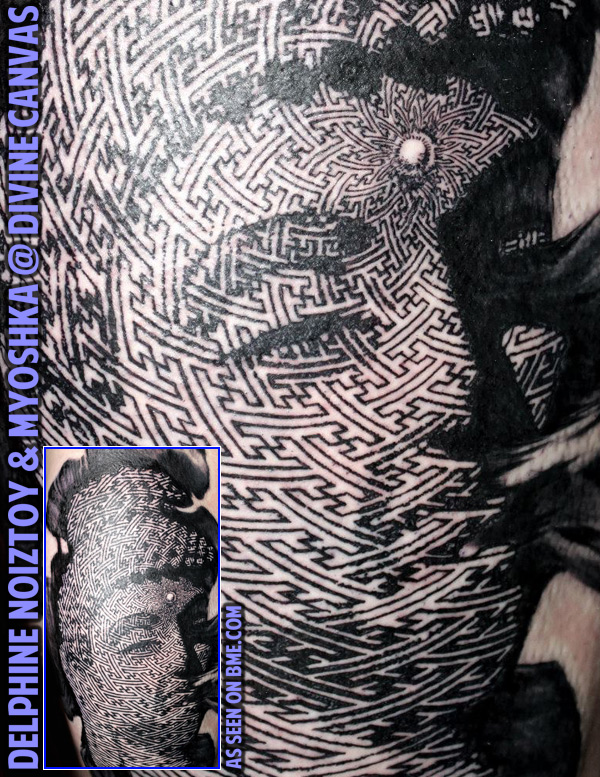 The top tattoo in this pair, the dragon, was done by Steve Hartnoll ages ago but recently popped up with a mild case of viral-photo-itis. It’s a little awkward aesthetically, but it’s definitely the sort of funny gag tattoo that makes you a hit with your nephews. When I mentioned this picture, my friend Piloy (piloy.com) showed me the bottom photo of the Ganesha tattoo, pictures of a guy he met with a placement that to me feels a little less awkward — although it does it at the cost of having a slight disconnect between the two parts of the image, unlike the tattoo, which is practically a muppet grafted onto the wearer’s shoulder. 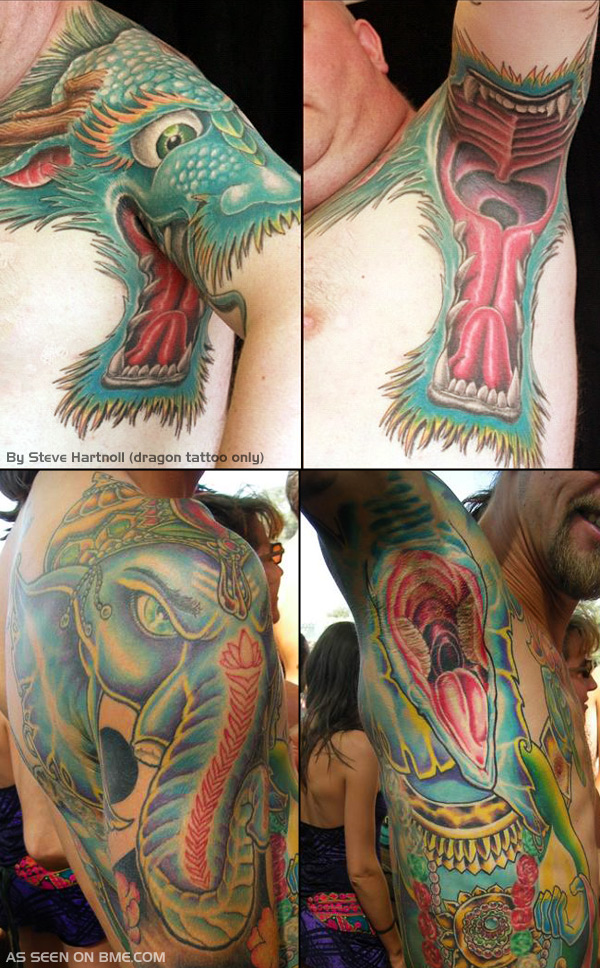 As soon as I saw this tattoo by London’s Damien Voodoo (divine-canvas.com) I could tell there was something special about it — there was a unique energy about it that one rarely sees in a tattoo, and of course it has a clean, simple, beautiful design aesthetic that stands out from other tattoos as well. I asked Damien about it and was told,

I drew the symbol on this lady because she needed strength and protection. I remembered an Ahl-i Hava [Followers of the winds] symbol from childhood which is an African Persian symbol which represents a strong tree that can stand very powerful winds at the cross road between this world and the unseen world. 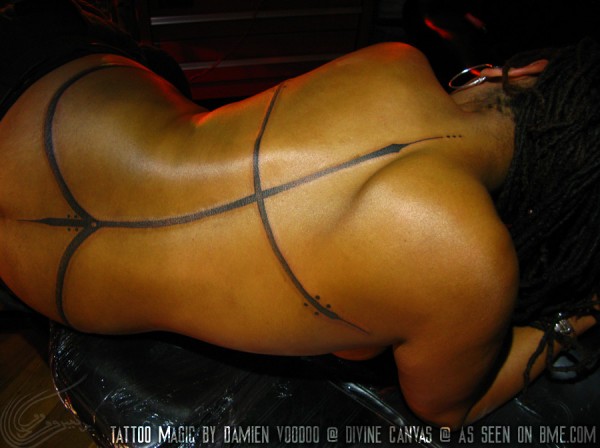 If this looks familiar to you, it’s because Shannon first posted about this hand poked circle of life tattoo a few weeks back.  Back then it was just the outline, but since then handpoked master (that sounds dirty) Ferank has finished up the sacred geometry, and the result is breathtaking.  Oh, it should be noted that the cross was tattooed by someone else.

Jackie Rabbit looked to a statue in Rome for this tattoo.  The statue, entitled “Angel With The Cross” is located on Ponte Sant’Angelo in Rome.

Tam Mayer (of Bells Ink Tattooing & Body Piercing in Victoria, Australia) has managed to get herself in some hot water, all because she tried to do the right thing. As a part of a fundraiser for a local boy — in which they raised $3,000 to help him (the whole event raised $15,000) — she tattooed her friend Luke Coleman with this image of Buddha. At first everyone was happy, and thought they’d done something really special, and I’m sure they were even happier when some of the big tattoo rebloggers picked it up, featuring it because it’s unusual to see a tattoo like this on the sole of a foot (and I have to admit I have some doubts about how it will heal). Anyway, the problems began when Thai Buddhists saw the tattoo and took offense at the tattoo’s location — that someone was walking on the face of Buddha, which they thought was deeply disrespectful. Immediately the comments changed from congratulating Tam for a unique tattoo and more importantly, raising $3,000 for a child in need, to threatening to murder her if she ever showed her face in Thailand. Comment after comment insulted and berated her. Did Tam make a tactless mistake? Perhaps, by some interpretations of Buddhism. But by other interpretations of Buddhism, she did something wonderful. To my way of looking at it, this is just another example of extremist interpretation of religion poisoning everything. As far as I’m concerned, Tam’s got nothing to apologize for. If Buddha and Jesus existed, I’m sure they’d give her a high five for helping others, and then punch the religious radicals in the nuts for spreading hatred in their name.

Edit: I wanted to add one other thing — as soon as Tam found out that what she’d done was potentially offensive, she apologized profusely to anyone she might have offended (as did Luke), and said they wished they’d known in advance so they could have avoided the situation. It was very clear that they’d acted only with the best of intentions — and I want to be clear that the above comments are mine, not hers.

We’ve seen Gabor’s abstract works here many times, but I think this is the first religious one we’ve seen.  Given the skull, the horn, and the angel wings, it’s a pretty safe assumption that this is a take on Gabriel blowing his horn to signify the end of days.  The thing about this particular image is that it’s not limited to Christian mythology.  While Gabriel appears in Islamic myth, it’s Israfel who sounds the trumpet of doom there.  For the Norse, Heimdall (the dude who stood on the end of the rainbow bridge in the Thor film) will blow the Gjallarhorn to warn of the coming of Ragnarok.  In any case, when December 12th hits this year, hopefully none of us hears a horn blow.

I know.  My jaw also hit the floor when I saw this.  Wang has done it again.

There’s no way anyone’s going to confuse this for a Disney movie.  Although now that I think of it, it does kind of look like King Richard from the Disney version of Robin Hood.  Oo-de-lally.

Here’s a neat little textual piece sent in by Kanji, who I’m hoping we’ll see more of, as he’s got a nice collection of tattoos in this style.